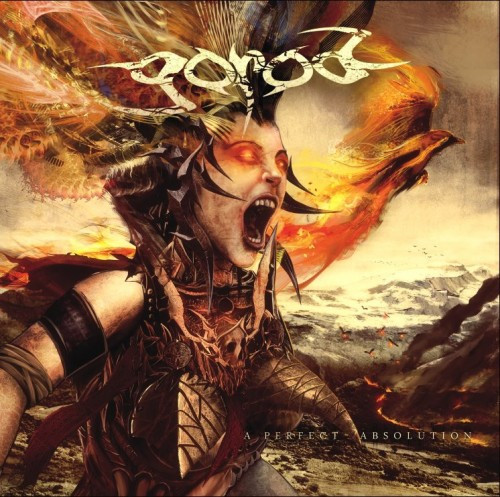 (groverXIII reviews the new album by Gorod, which will be released by Listenable Records on March 23 in Europe and by Unique Leader on May 8 in North America.)

This is not a new development, of course. I first became a fan back when Process Of A New Decline was released, which just happened to be around the time that I really started getting into technical death metal. I started with Necrophagist and Obscura’s Cosmogenesis, along with Cynic’s Traced In Air, but Process was the first time that tech-death really, truly clicked for me. It wasn’t an immediate thing, of course… it took several listens before the seemingly incomprehensible mass of sweeping and tapping began to make sense, and several more listens before I really started to understand the ridiculously complex song structures, but by then, I was well and truly hooked. Gorod did what I had previously thought impossible by making tech-death catchy.

Since then, I’ve searched for another tech-death band with that same knack for writing those complex, yet unbelievably catchy tunes, and while I have discovered a lot of great bands, none have managed to truly top Process. I imagine that this is somewhat akin to what junkies and serial killers go through, constantly and futilely chasing that initial high. Still, I have one advantage that they don’t have… Gorod could always release an album that manages to outdo themselves, even in my mind.

Is A Perfect Absolution that album? At this point, I’d have to say no. But that’s not to say that this is a bad album; far from it, in fact. A Perfect Absolution is, in my humble opinion, the best tech-death album of a year that’s been very, very good for tech-death. When you consider the fantastic new albums from bands like Spawn Of Possession, Psycroptic, Xenocide, Bloodshot Dawn, Gory Blister, and Innerty, as well as decent releases from the likes of Veil Of Maya, Beneath The Massacre,  Ketha, Deformitas Pictura, and Slice The Cake, this is saying quite a bit. It’s not so much a negative statement regarding any of those releases, so much as it is a statement of just how fucking good A Perfect Absolution is.

The album launches with ‘The Call To Redemption’, starting off on a quiet note. You hear the sounds of birds chirping merrily near a stream, but a sense of foreboding is instilled almost immediately with a stabbing, dissonant orchestral introduction, and then everything comes crashing down as Gorod launch into furious, technical riffing on ‘Birds Of Sulphur’. Considering that the band replaced vocalist Guillaume Martinot and guitarist Arnaud Pontaco, they haven’t missed a beat. In fact, new vocalist Julien “Nutz” Deyres actually displays a bit more range than Martinot, and is a little bit easier to understand, even as he does a fine job replicating Martinot’s previous vocals, and new guitarist Nicolas Alberny fills in perfectly for Pontaco. As Deyres roars about fire raining from the sky (the titular sulphur birds), Alberny trades riffs and leads with Mathieu Pascal while Benoit Claus lays down fretless bass and Samuel Santiago pounds the skins with reckless abandon.

And they’re only just getting started. ‘Sailing Into The Earth’ is packed with riffs, but it also utilizes several classic Gorod tricks. Entire sections of the song are based around leads instead of riffs, letting the bass carry the heaviness of the song while the guitars intertwine and harmonize in spectacular fashion. There are also the massive grooves that they settle into, keeping the song rolling while still giving you a chance to catch up. There is, however, more of a focus on outright guitar solos, which is a bit of a change from Process, albeit a welcome one.

There are some subtle keyboards present on ‘Elements And Spirit’, adding just a hint of atmosphere, but as usual, the guitars take center stage on some staggeringly intricate, winding leads. There’s also a brief acoustic moment that pairs up with some clean vocals (for all of three words), and not too long thereafter, there is an extended spoken word section underscored by increasingly frantic soloing. Claus’ fretless is impressive here, even if it’s not front and center like his contemporaries, Jeroen Thesseling and Dominic LaPointe; the distinct warm bass tone propels the song forward even as Pascal and Alberny are weaving their leads together. 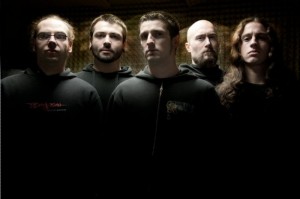 ‘The Axe Of God’ blasts off to a quick start, with Santiago finding an impressive array of ways to keep the pace high. There’s another instance of semi-clean vocals, followed by another honest-to-goodness guitar solo. I think this might be the most standard I’ve ever heard Gorod, as the extensive solo would be right at home in a melo-death song. Still, the technicality on display here is a step above most In Flames clones, and it’s nice to hear Gorod change things up a bit.

Things take a turn for the weird on ‘5000 At The Funeral’. The song starts with piano and clean, sparse guitar over the sound of church bells. As the intro progresses, strings swell forth, adding to the dirgelike atmosphere, and then the guitars take over, transitioning into one of my favorite riffs on the album. There are more spoken vocals here, and then Deyres unleashes the full fury. The riffs here are, as usual, all over the map, but there’s still a definite structure, and some of the leads on this track are astounding.

The fretless once again plays a key role on ‘Carved In The Wind’, a track that serves to showcase Gorod at their best. Claus accents the guitars while still laying the song’s foundation, and the results are impressive. The song features another of my favorite riffs, as well as (and I’m not entirely sure about this, because I’ve seen conflicting information in a few places) an insane guest solo by Obscura/Spawn Of Possession axe-master Christian Muenzner and possibly also by The Faceless guitarist Michael Keane. (I know that both are featured on the album, and have seen at least one report that both are featured on this tune, but have been unable to confirm just who exactly performs on this track.) One of my favorite parts of this song is the massive groove that the band gets into just as the solo section is beginning; it serves to illustrate just how brilliant these guys are.

Perhaps my favorite track on the album is ‘Varangian Paradise’, in no small part due to the 70’s disco groove that kicks the track off. It’s like a tech-death take on the theme from “Shaft”, and it’s utterly fucking brilliant. The song is loaded with that swagger that seems to be unique to Gorod’s music, and the solo around the midpoint is pure auditory bliss. There’s also a wonderful Latin section that seems to be a holdover from the acoustic ‘Blackout: Renewed Souls’ from the fantastic Transcendence EP that is utter genius, and just plain fucking works even though it probably shouldn’t. It’s tracks like this that truly elevate Gorod above their tech-death brethren. 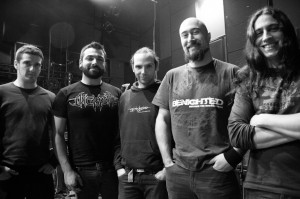 The album concludes with ‘Tribute Of Blood’, a burner of a track with several riffs so infectious that you’ll have to be careful not to transmit it to your sexual partners. The insanely intricate harmonized leads, as always, carry the day, but there’s also one of those groovy sections, ringed with some odd, dissonant guitars, that never fails to get your head nodding. The track ends rather abruptly, sounding like a CD skipping, leaving the listener disoriented, exhilarated, and if you’re anything like me, incredibly satisfied.

So, does this album top Process Of A New Decline for me? Like I said earlier, it doesn’t… at least, not yet. With an album this complicated, it takes a lot of listening to really get your head around it, and considering the level of familiarity I have with its predecessor, it’s going to be a difficult thing to top. But I can safely say that A Perfect Absolution is a worthy follow-up to Process, and it should firmly seat Gorod atop the technical death metal crowd. There are a lot of bands out there who are as talented as Gorod, but these Frenchmen have a talent for songwriting that places them light years beyond most of their contemporaries. VIVE LA FRANCE!

22 Responses to “GOROD: “A PERFECT ABSOLUTION””