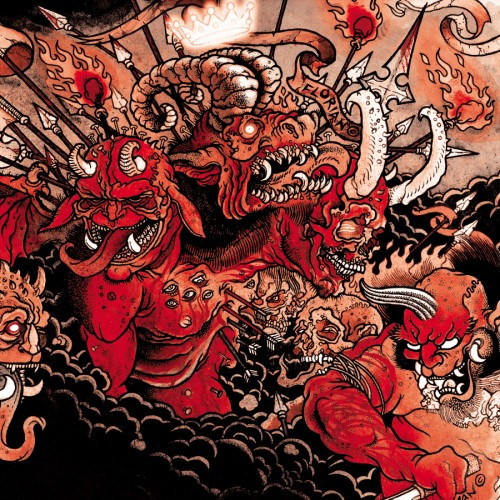 In 2005, Relapse Records released a double-CD album by Agoraphobic Nosebleed titled Bestial Machinery. It collected all of the band’s recorded material before their Relapse debut, Honkey Reduction, including tracks from the Agoraphobic Nosebleed splits with Cattlepress, Laceration, and Enemy Soil, plus out of print material and previously unreleased tracks.

Now, if you’re unfamiliar with ANb, it is the mutated offspring of the infernally talented Scott Hull (Pig Destroyer) and a drum machine from Hell. The rest of the line-up (mainly vocalists) has varied over time, and I don’t think the current group was around when the material on Bestial Machinery was recorded. And what’s on Bestial Machinery is a rampaging cybernetic grindfreak on steroids, just as violent and otherworldly as Florian Bertmer’s magnificent album cover.

The main reason I’m posting about an album that’s now about seven years old is that I just discovered that it’s available for download on Bandcamp. I’m not sure how long it’s been there, but I think the addition is pretty recent.

I can’t resist embedding all 136 tracks here at NCS, because that’s what having the album on Bandcamp permits me to do. The player is after the jump. Go listen and get fucked hard in the head. Should you choose to buy the album, you may do so HERE.