THAT, my friends, is the cover art for the new (third) album by Sweden’s In Mourning, The Weight Of Oceans, which will be released by Spinefarm Records on April 18. The artwork is by none other than Kristian Whålin (Necrolord).

This is old news, since the album art and details about the album were released in late February — except I didn’t pick up on it until TheMadIsraeli started chatting with me about In Mourning earlier today on FB.

Necrolord has created so many stupendous metal album covers in his career, but this is definitely one of my favorites.  This excerpt from his bio at The Font of All Human Knowledge includes some info I didn’t know (and after the jump, I’ve got some music from The Weight of Oceans):

At the age of 17, Wåhlin formed Grotesque (as guitarist) with school friend Tomas Lindberg on vocals, Alf Svensson on guitar, and Tomas Eriksson on drums. The 1990 break-up of Grotesque would lead to the formation of At the Gates, who would be credited as instigators of the “Gothenburg Melodic death metal sound”. Wåhlin would collaborate with Lindberg and other At the Gates members a short time additionally in the death metal band Liers in Wait, and would go on to design the “Russian icon” cover-art of At the Gates’ cornerstone release, Slaughter of the Soul.

Dissection, who shared practice quarters with At the Gates, would display illustrations by Wåhlin on the cover of The Somberlain and also Storm of the Light’s Bane; the latter featuring the infamous scene of the “grim reaper horseman” in the middle of a snow-covered forest tundra. In the Nightside Eclipse, the debut of seminal Norwegian black metal band Emperor, would also be graced with his work on the cover. Wahlin would continue as an album artist for several other bands in the European death, black, doom, power and gothic metal collective throughout the 2000s. 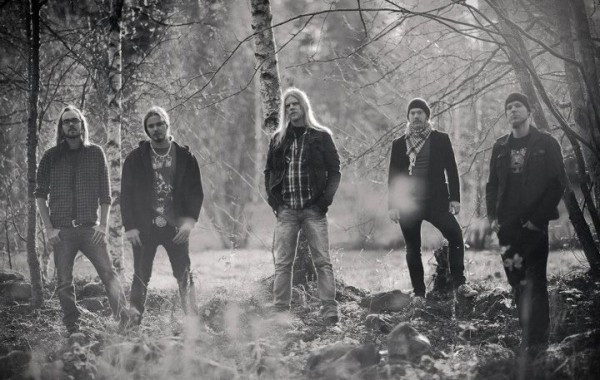 Now here’s a teaser clip of music from the album, all of which sounds fuckin’ sweet to my ears, except for one little part, and I think you’ll figure out which part that is. We are eagerly awaiting this album, our claws opening and closing in reflexive expressions of grasping greediness.

Check out In Mourning on Facebook here, where you can find info about album pre-orders.

22 Responses to “EYE-CATCHERS: IN MOURNING”