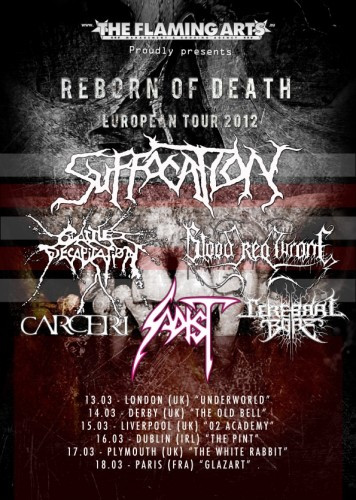 (Andy Synn witnessed the Derby, England stop of the Reborn of Death Tour and apparently was so skull-rattled by the experience that he thought he was at the movies.)

What a line-up, am I right? It’s like a 6-round pummelling before that final knock-out blow. Each band softening you up for another vicious beating by the next. So, still feeling a little punch drunk from the experience, how am I going to manage to review the show for you fine folks?

Through the works of one Mr Sylvester Stallone.

Chronologically speaking, Carceri are the Rocky Balboa (Rocky 6, for those not in the know) of the evening. Definitely the newest act on the block, with a large legacy to live up to. Thankfully, much like their filmic counterpart, they manage to take familiar elements and give them just enough of a modern shine to justify their position. Playing cuts from their new album The Good Must Suffer The Wicked, with a backdrop of dizzying, morbid imagery scrolling and warping behind them, the group deliver an electrifying blend of punchy, mechanical riffage, bone-rattling blast-beats and massive death growls that deftly bears up under the weight of their Oscar-winning legacy.

Unfortunately, the position of Rocky 5 is occupied by Cerebral Bore tonight, as their brain-mangling death-grind has all the familiar elements and hits all the expected story-beats, but somehow lacks the inherent character and heart in its delivery. The vocals are utterly monstrous, but the drums have an overly-triggered sound that robs them of their brutality, and the bass and guitar never fully lock in correctly. The actors are all present, but something about the story is lacking. Close to the end of the set, however, the band debut a new song that shows real promise, picking up the pace in time for the closing credits.

Rocky 4 is definitely considered “the weird one”, featuring a lot of familiar elements put in a new, and at times confusing, context. Thus it’s quite fitting that Sadist occupy that position in tonight’s line-up, as their raging death metal vocals definitely fit in with familiar expectations, but the punchy, jabbing bass-lines, blistering post-Death guitar lines and up-front sci-fi keyboards are all delivered with the focussed intensity and calculated complexity of Russia’s top scientists.

Except the band are Italian, and definitely the odd one out on tonight’s line-up. Not that that stops them though, as, much like the Italian Stallion himself, they use their impressive skills and sheer heart to finally win over an initially hostile crowd.

As the nastiest, and perhaps most brutal, band of the night, it falls to Blood Red Throne to fill the role of Rocky 3 – that’s right, the one where Mr. T turns up and brutally beats Rocky within an inch of his life, taking both his title and his pride. That’s definitely the sort of sound BRT deal in – overwhelming, steroid-fuelled, blood-drunk aural violence. Their barbed-wire guitars and thunderous uppercuts of drums take the night’s musical beatings to a new height, material from their latest album Brutalitarian Regime meshing seamlessly with cuts from across their back catalogue. Clearly, like Rocky himself, the extra pressure on the band has forced them to step up their skills and training regime to a new level of confidence and power.

Cattle Decapitation’s triumphant display of splatterhouse blast-beats and sledgehammer guitars sets them firmly in the enviable position of Rocky 2, the band succeeding as the night’s overall champions, rising from the ashes of adversity to finally grasp the gold!

Okay, maybe I went a little overboard with the metaphor there, but it has to be said that Cattle Decapitation had largely fallen off my radar recently. Yet their live show, all spewing vocal vomit, in-bred mutant melody lines, and grumbling, gut-wrenching bass-lines, capped off by the impressive delivery of the new material debuted tonight, “Nightstalker”, “Do Not Resuscitate”, and the brilliantly-titled “Forced Gender Reassignment” (off up-coming album Monolith Of Inhumanity), definitely sees the band rise to the occasion, leaving the night as deserving champions.

At the root of all of this evening’s violence, however, is the seed planted by Suffocation. They’re here tonight in the role of veteran players, originators of the style and progenitors of all the other acts whose careers blossomed after theirs. When it comes down to it, the band have persevered through all their recent problems, the permanent loss of drummer Mike Smith (effortlessly replaced tonight by the slightly more fluid playing style of Dave Culross) and the temporary absence of vocalist Frank Mullen due to unavoidable commitments, weathering these storms with bull-headed stubbornness and a refusal to back down.

Decrepit Birth’s Bill Robinson proves himself a more than adequate replacement for the absent Mullen, his weird psychedelic ramblings and mountain-man growls raising a rabid response from the audience and a wry, approving smile from his erstwhile Decrepit Birth band-mate Derek Boyer. Ultimately, the band triumph in the face of adversity, their underdog status inspiring them to a powerful display of stubborn resolve which, while not the night’s championship winning performance, definitely earns the respect of all those attending.