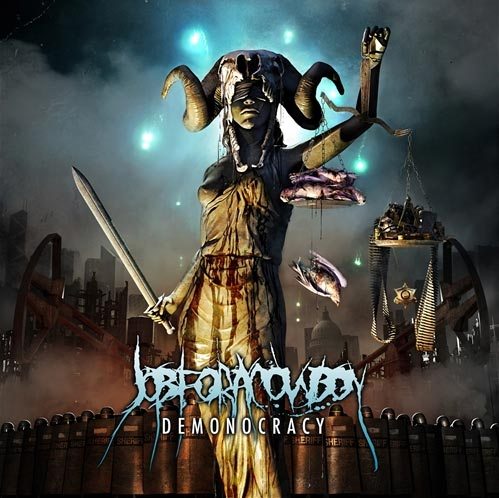 (NCS writer Andy Synn reviews the new album by Job For A Cowboy, which is scheduled for North American release on April 10, 2012 through Metal Blade, plus we have the three songs from the album publicly released to date.)

Looking back at their career thus far, it’s definitely been an upwards trajectory for Job For A Cowboy. Some might say that’s due to where they started from; Doom is definitely showing its age these days, although still surprisingly spritely in places. Good but not great (despite what the more entrenched fan-boys might claim), the EP was largely a product of its time, seeing a talented band of youngsters riding the crest of the myspace/social networking wave and combining their burgeoning (though undeveloped) talents with new methods of marketing and self-promotion. Though castigated by many for this, there’s no shame in it, particularly as the group have used every subsequent release in an attempt to prove their worth as one of American death metal’s up and coming contenders, improving their instrumental skills and technical abilities at every turn.

If the massive growth demonstrated between the release of Doom and Genesis was an early sign of the band attempting to justify the hype surrounding themselves, then the even bigger leap between Genesis and Ruination was definitely the product of a band “finding themselves”. Having laid these solid foundations, Gloom served the key purpose of an EP perfectly, showcasing some different shifts in direction around this established core. And there we have it, a consistent upwards trajectory that has demonstrated both growth and drive, often in the face of an intransigent metal community

So how does Demonocracy fit in? 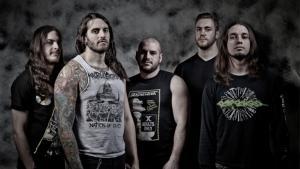 It’s clearly the best yet. Preconceptions be damned, this is a fine slab of dark, meaty death metal.

The riffs are complex yet compelling, straddling a line between technicality and brain-piercing hooks, with every one of the album’s nine songs boasting a plethora of nasty riffs and an array of blazing leads (largely courtesy of new guitarist Tony Sannicandro), with particular reverence and respect to be paid to the multi-act lead progression in “Imperium Wolves” and the overwhelming aggression of “Fearmonger”, which serves to highlight the impressive interplay of full-force guitar lines, clever drumming, and subtle nuances of bass-work, all of which combine to impressive effect.

Indeed, the bass shines throughout the album, having been given sufficient prominence in the mix to really make its presence felt. Nick Schiendzielos’ playing offers up some unpredictable twists and turns, as on “Black Discharge” where he provides not only a clanking, juddering low end but also breaks through the deathly haze with a variety of odd counterpoints and lurching, pseudo-melodic bass-runs that surprise and tantalise the ear .

Similarly, the bloody-knuckled and tendon-ripping drumming performance of Jon Rice refuses to hog the limelight, instead content to capture its own place in the mix to the benefit of the album as a whole. It’s not all blast and bludgeon either, Rice giving a credibly nuanced and emphatic performance designed to serve and improve each song, rather than pander to expectations or simply show off his own skills.

The vocals have always been an integral part of JFAC’s identity, as I have found Jonny Davy’s multi-faceted growls and screams to be far more capable of portraying the oft-missing human element of the necessary death metal emotions (rage, disgust, hatred, etc) than the great majority of his generation. The man continues to impress on this release; his guttural growls (a technique arguably mastered many releases ago) have retained their potency, while his high screams have taken a serious step up in their breadth and depth of expression – there’s just that extra bit of torment coming through that is like the mercury frosting on a death metal birthday cake.

Although a technically gifted album through and through, I’d still hesitate to call it a Technical Death Metal album (genre terms are great, aren’t they?), as there’s far more of a focus on providing monstrous hooks and conjuring an ominous and pervasive mood than in hosing the listener down with a golden shower of notes and triggered blasting. 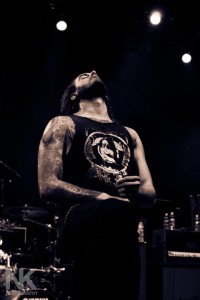 Mood? That’s right. Not perhaps a word that those who judge JFAC only on third-hand information and hearsay might have thought to associate with the group, it definitely applies to‘Demonocracy. There’s a powerful consistency of focus and purpose that underpins each song, meaning the material is self-supporting and self-sustaining. Long after the hype has died down, the songs will remain.

Indeed, although only nine songs in length (perhaps not enough for the ADD generation, with their expectations of as many notes and breakdowns shoe-horned into a three-minute run-time as possible, but I digress…), the album clearly shows the hallmarks of the care and finesse that have been put into each composition. Each song has an appreciable arc to it, peaks and troughs, light and shade, ably demonstrating the group’s growth and maturity. It may seem odd to talk about the progression of Job For A Cowboy as a distinct entity in and of itself when the group has gone through such heavy line-up changes over the years, but it definitely seems to me that each transition has seen the core identity of the group retained, with the skills and experiences of each new member incorporated into the central hive-mind, allowing for organic growth, without the loss of integrity.

Sonically, this album most strongly reflects the early work of Decapitated, with a similar élan for sharp twists and turns a la Nihility, while some of the crunchier, jarring rhythmic shifts owe a debt to the Blood Red Throne school of metallic dynamics. It’s interesting in many ways that an American band like JFAC have drifted toward this slightly European sound, which is itself characterised by a surprising drift toward an Americanised influence. The gap is clearly closing, as both sides of the death metal coin steadily amalgamate and feed off one another.

As of yet the band haven’t quite locked down that world-beating, signature tune in the style of “Spheres of Madness” or “Slaying The Lamb”, though several entries from both ‘Ruination’ and ‘Gloom’ have come close. Though this trend continues (disappointingly) for Demonocracy, the album is still thick with tangled riffs and throat-scraping screams that seem always on the verge of coalescing into a real black diamond of a song, with several entries coming within a hair’s breadth of that coveted ‘definitive’ status.

That being said, the album is never lacking in the riff department, be it the death-race riffage and squalling leads of “Nourishment Through Bloodshed”, which swings between face-melting speed and staccato pulses of machine-like precision, or the jarring rhythmic shifts and hanging chords of “The Deity Misconception”, axe-slinger Al Glassman continues to impress with his ability to wring riffs from his guitar that are as compelling and memorable as they are dizzyingly complex and devastating. 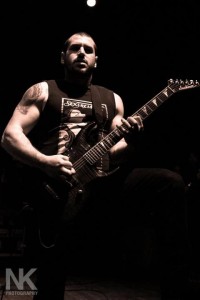 Melody abounds throughout the album, albeit in a thoroughly dark and viscous form. Look no further than the virulent, cortex-infiltrating riffage of “Tongueless and Bound”, particularly its infectious closing bars, or the multiple leads and solos that slither their way through the cracks in the intense storm of riffage that is “The Manipulation Stream”. Closer “Tarnished Gluttony” sends the album off perfectly, taking the undercurrent of melody and bleeding it dry, the slow and crushing pace of the song a call back to the band’s earliest experiments with this sort of dynamic shift (see ‘The Divine Falsehood’ for the roots of JFAC’s flirtation with some similarly post-apocalyptic mood-scapes), now accented by a better grasp of story-telling and cathartic forces.

This is the sort of release we should be championing, although I know many won’t, due to their own intractable preconceptions about the band (just as I know that many simply won’t like the album, for their own reasons, which is fine, to each their own). The band have proven time and again that they’ve stepped outside the limiting boundaries of their genesis, and in fact have long since gone past the point of feeling the need to ‘prove’ themselves to anyone.

More importantly, they are also a band whose ascension has forcibly dragged their audience, at times kicking and screaming, out of their ghettoised trends and into an arena where the big boys of death metal play. It’s no lie to say that if there is any such war between ‘real’ and ‘false’ death metal, then Job For A Cowboy are a powerful weapon of propaganda which can be used to win over the hearts and minds of the enemy, their early associations often masking, in the eyes and ears of the uninformed, their true death metal credentials – something which we can either choose to criticise or exploit for the greater good.

Only time will tell if Demonocracy is the peak of JFAC’s career (and if they were to call it a day after this, they could be deservedly proud of their achievements) or if it will serve as yet another impressive milestone in the band’s inexorable rise. As it stands, though, with their third album Job For A Cowboy stand their best chance yet of barging and bludgeoning their way into the hallowed halls of death metal’s elite.

EDITOR’S NOTE: So far, JFAC and Metal Blade have released three singles from Demonocracy. The first one, “Nourishment Through Bloodshed”, is still available for free download through the Soundcloud player you can find on this Metal Blade JFAC page. The second one, “Black Discharge”, premiered on Metal Underground. And the third one, “Imperium Wolves”, debuted just a couple days ago on Guitar World. You can listen to all three below.

16 Responses to “JOB FOR A COWBOY: “DEMONOCRACY””