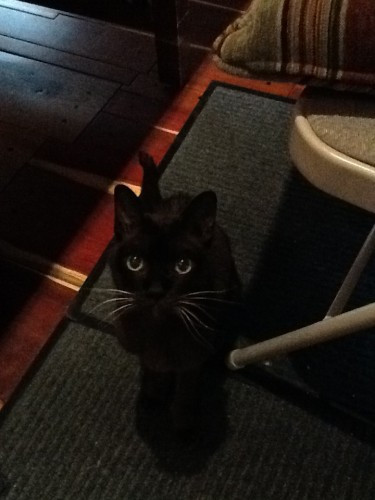 I’m getting a slow start on today’s NCS posts. We had to put our cat down yesterday, a couple of weeks after his 18th birthday.

He had gone downhill fast. He stopped eating about 5 days ago, stopped cleaning himself, and was having trouble walking. He didn’t seem to be in pain, yet, but he seemed miserable. The vet said he was most likely experiencing kidney failure, which she said is the most common cause of death in old cats. She said he could last a few more days on his own, or conceivably a few more weeks, even without eating. She said she could do some things to prolong his life, but that his time had come. She said it would be appropriate in her opinion to euthanize him.

My wife and I agonized about that for 24 hours, but we couldn’t stand to see him in the condition he was in. So late yesterday, the vet gave him an injection of something that rendered him unconscious in about 5 minutes. His eyes slowly closed and his small, dark head drooped onto his chest. She then put an IV in a vein and used it to inject something else that stopped his heart in seconds.

I’ve been in bad shape since then.

He was a constant part of my daily life for 18 years. He lived inside our home — we live in a place where he wouldn’t have survived nearly so long outside, what with raccoons, coyotes, dogs, and much bigger and nastier cats on the loose. He greeted me every morning, followed me around the house wherever I went, curled up in my lap (or on my chest or on my shoulders or right up on my face) whenever I sat down to read or listen to music, fucked up my typing when I was at the keyboard by walking across it or sitting right in front of the monitor, threw up hairballs on a regular basis without being choosy in where he did it, made an awful howling noise whenever I would go outside, but was otherwise quiet as a stone — except for the almost constant purring.

He was so clingy and affectionate that a lot of the time he was just a fucking nuisance. But at the moment, I’m having trouble imagining how to be happy without him.

I listened to a new EP yesterday morning before that last trip to the vet. In a way, it suited how I was feeling and made things a bit better, briefly. I’ll write about it soon, but not today. I haven’t paid much attention to music or metal happenings in the last 24 hours. Fortunately, many of my NCS comrades have stepped up, and we’ll have a lot of their posts today. Probably better for me to get those ready for posting instead of just staring into space and crying some more about the loss of my friend.

Ugh, sorry for all this sappy shit. It really doesn’t make me feel any better to share my misery, but I thought I owed an explanation for today’s delay. There will be a lot of other, better posts coming up soon.