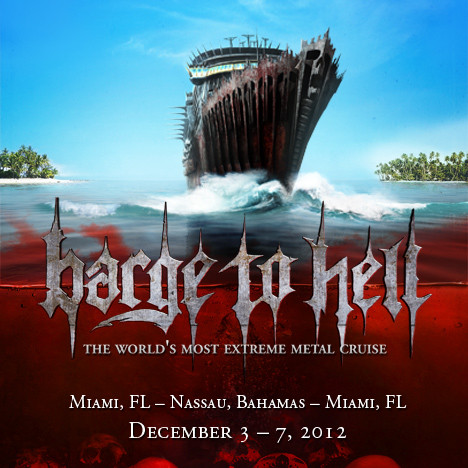 When the first edition of 70,000 Tons of Metal was announced back in January 2010, I had loads of fun imagining all the things that could go wrong with the concept of putting 40 metal bands, 2,000 metalhead fans, and 24/7 bars on a boat. Sailing on an actual ocean. With waves and shit. It made great fodder for multiple posts, starting with this one.

I had to eat my words (which I did, with a side of fried chicken) when the damn thing turned out to be a real success by all accounts. And then they did it again, and that seemed to turn out well, too. No one drowned, there weren’t any cases of fatal alcohol poisoning, and only twenty-three children were conceived out of wedlock.

Now there’s another metal ocean excursion on the horizon called Barge To Hell. As in the case of the two 70,000 Tons of Metal cruises, the promoters are doing the slow roll-out of the band line-up — but it’s now gotten so good that I can’t ignore it any longer, especially with the recent addition of Belphegor, Kampfar, Soilwork, and Solstafir. With only half of the 40 bands announced for this excursion, it already seems like a compelling event for those fans with the time and the money to jump on board.

The organizers promise that every band will play two live shows on one of three different on-board stages — including an open air stage on the pool deck (so I guess drowning is still a possibility). The Barge To Hell is scheduled to set sail on Monday, December 3, 2012, from Miami, Florida for a trip to Nassau, Bahamas, returning on December 7, 2012.

Ticket prices start at US$666 plus US$289 taxes and fees per person and meals are included. Note: the price does NOT include alcoholic beverages, so budget accordingly. Visit http://bargetohell.com/home.htm for more information. Now, here are the 20 bans whose appearances have been confirmed so far: