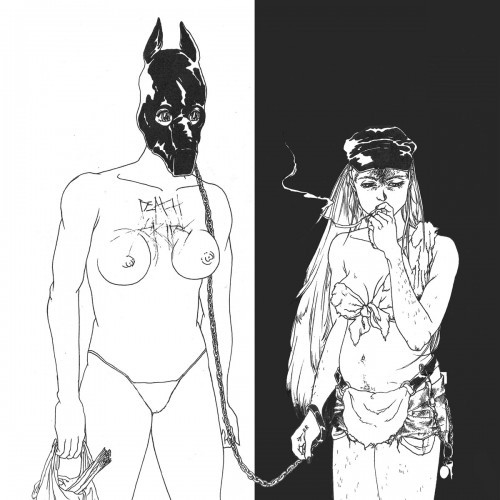 Now that we’ve got that out of the way… By now, you should have heard of Death Grips. This Sacramento-based experimental rap trio has been mentioned several times by myself and BadWolf, and the aural insanity that is the Exmilitary mixtape has been spread everywhere. (It’s downloadable for free on the Death Grips site, along with several tracks off of this album, and the whole album can be streamed there.) Following the buzz that Exmilitary generated, Death Grips signed with Epic Records (on the condition that they maintained full creative control) and have released the first of two highly-anticipated 2012 albums, The Money Store. And that, my friends, is what brings me here.

Now, if somehow you missed out on Death Grips, they’re a bit hard to describe. They are ostensibly a rap project, but the experimental nature of the group pulls them into completely foreign territory. Let me put it this way… With most of the good rap (read: not the shit that they play on the radio), the MC is an instrument of surgical precision, utilizing intelligent wordplay and a deft delivery the way a master swordsman wields a rapier. Death Grips, on the other hand, are a warhammer being swung recklessly by a berserk, half-mad barbarian tweaking on meth. I initially compared them to the rap equivalent of black metal, but the more I think about it, the less accurate I think that comparison is. No, I would say that Death Grips is more like the rap equivalent of Gorguts, taking a fairly established sound and twisting it into something bizarre and otherworldly. 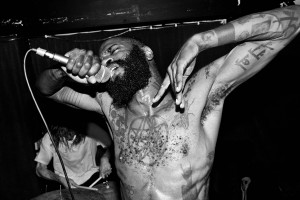 The Money Store shows a bit of a change in the Death Grips sound, starting with the initial track ‘Get Got’. The blooping synths and restrained delivery of MC Ride will definitely surprise people expecting another ‘Guillotine’, and there’s a good chance that it might lull them into a false sense of security, leaving them unprepared for ‘The Fever (Aye Aye)’. Zach Hill’s furious drumming is on full display on this track, bludgeoning the listener beneath a more aggressive delivery from MC Ride and the usual weird-as-fuck samples of Andy Morin.

Things proceed with typical Death Grips weirdness until ‘I’ve Seen Footage’ throws you a major curveball, using a beat seemingly borrowed straight out of Salt-N-Pepa’s ‘Push It’ and perhaps the most accessible, poppy structure yet heard in a Death Grips song.

There certainly seems to be more of an experimental streak on this album, and slightly better production, although much of the compressed, blasted sound and vocals on their previous material seems like a calculated thing and still finds use in tracks like ‘Punk Weight’. But make no mistake about it, The Money Store is decidedly a Death Grips album, and it plays off of their strengths the whole way through. Musically, it’s unlike anything I can possibly think of, fearless and inventive throughout its 41-minute runtime. It’s an aggressive album, sort of the equivalent of being hit upside the head with a brick while receiving fellatio from one of the individuals on the album art, but it’s also not afraid to make you want to dance.

If this seems like a short review, well, I find that words fail to truly describe this album. It’s something that needs to be heard and experienced. The Money Store is definitely not for everyone, much like Exmilitary, but it’s one of the year’s most original releases. Hell, the fact that a major label is releasing something as uncompromising and unconventional can only be seen as a positive sign. Maybe there’s hope for the music industry after all.