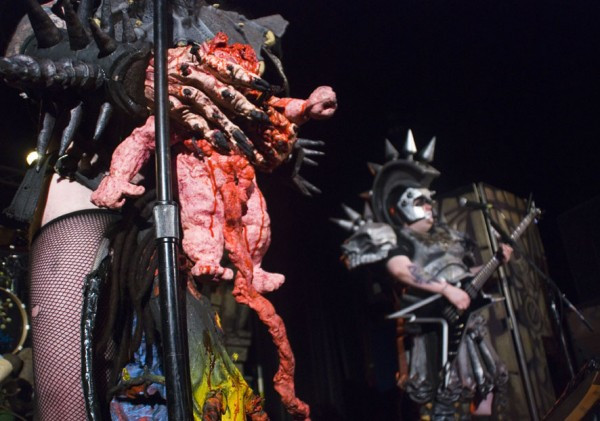 Opinions on the band aside, I have never seen such professionalism backstage. The band’s Tour Manager showed zero-tolerance for bullshit on the part of local staff and the band alike while displaying absolute reverence for the security team.

I’m glad the dud came first. Legacy of Disorder hail from New Zealand, and that’s about all they have going for them… besides their vocalist’s hair. They peddle core-inflected groove metal with a distinctly commercial edge—in other words, they want to be Lamb of God. Rest assured, they will never be. Their music bores, then annoys. And their drummer failed to play any of their songs in any sort of coherent manner. 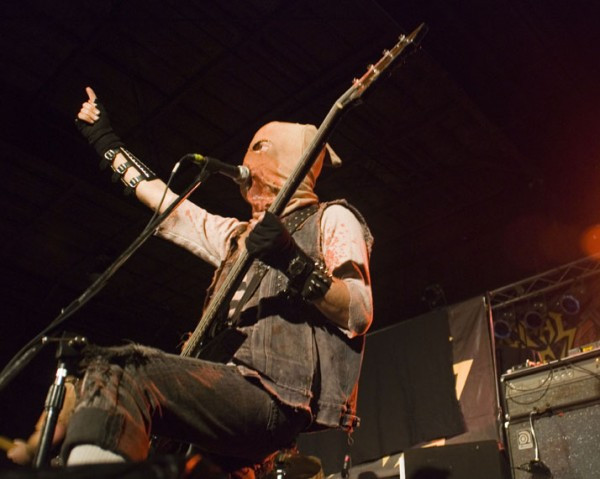 After that Ghoul took the stage. Ghoul fit the bill preternaturally well. Their stage show, complete with masked band members, blood-spraying voodoo chickens, and fighting robots, doesn’t so much borrow from GWAR as bloodily rip pieces off, then wear them. Their music, on the other hand, follows in the 80’s thrash tradition—in fact, rumor has it Ghoul’s anonymous members are each veterans of older metal bands. Reminds you of another new-and-popular “GH_ _ _” band, no? Be that as it may, Ghoul, like Ghost, have a provable knack for writing good songs, great even. And what is that proof? A little kid, no more than twelve, spent their entire set on his father’s shoulder yelling every word to every Ghoul song. 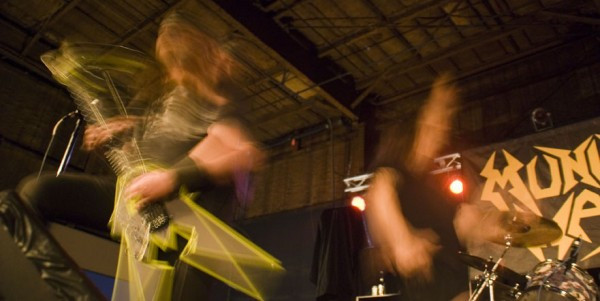 Municipal Waste never put on a bad show. Take that as fact. They design their songs to be perfect party songs, pit bangers, and full-blown events at once, while encapsulated  in tiny one-to-three minute capsules. Their set fell heavily on their career-bests from Hazardous Mutation and Born to Party, but spanned their entire career. A varied group of erstwhile non-heshers rounded out a crowd of punks and longhairs—one young man in a Discharge jacket ran the pit. Someone released confetti from the rafters during their closer, “Born to Party.” 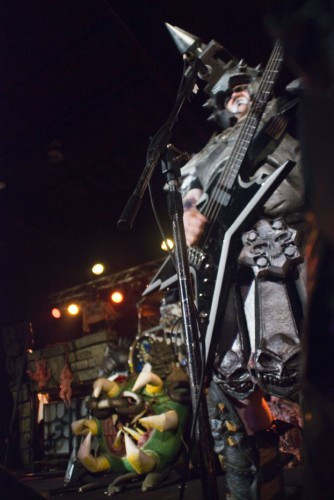 My friends crowded up close to see GWAR while I pulled back. This pattern has gone on for years—they opted to see GWAR over Opeth, for example (you know what I chose). This time, d00shc00gr made a point of reminding me that bringing back the World Maggot—the infamous GWAR stage prop that swallows people and spits out fountains of blood—is a very big deal. The crowd, it seemed, agreed.

This may sound morbid, but Corey Smoot’s untimely passing has probably given a booster shot to GWAR’s bottom-line—several tee shirts commemorating him sold before the band even started. I understand that GWAR’s fanbase froths at the mouth most in this part of the country, and that GWAR are a great time live for some. But not me.

As far as I’m concerned, to get the full experience, bug juice and all, I need to be right in the thick of things. That’s the way I approached GWAR the last time I saw them, and I spent most of the show blinded by food dye and detergent and slipping on concrete. I could forgive that if I liked GWAR’s music better, but live, their triggered drums and over-simple guitar chords sound like mush. Likewise, the vocals warble at best, flounder at worst, though the stage-banter remains coherent and witty.

From a dry vantage point, I gained a newfound respect for the choreography and rehearsal that must go into their stage show. For example, early on in the set Oderus Urungus played matador with a skeletal bull creature mid-song before dismembering it. It must take hella coordination to do that sort of thing in a clunky costume during strobe lights without disturbing the other musicians.

I left early, right after GWAR killed ‘Snooki’ onstage. Hey, she’s pregnant! You monsters. Either way, I’ll keep seeing them as long as they keep bringing great bands on their tours, but I will keep leaving early.