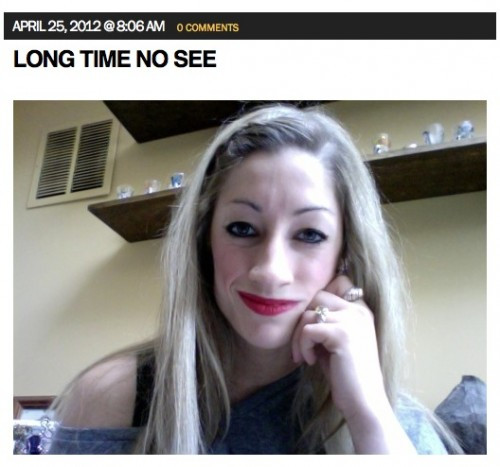 On the right side of every NCS page is a category of links called “Our Inspiration”.  It’s been there since our first post in November 2009. Two sites are listed, because reading those sites really was what inspired me to start NO CLEAN SINGING. One of them was Reign In Blonde.

RiB was started by two women — Julia and Elise.  Eventually, they were joined on a semi-regular basis by a third, “Angela Gossowski”. I read that blog every day, without fail. Julia and Elise were really good writers, they didn’t take themselves (or much of anything else) too seriously, and they had a talent for making any subject entertaining, even when I wouldn’t have found the subject matter itself intrinsically interesting. And Angela was . . . well . . . just riotously out of control all the time. Part of what I aspired to do with NCS was to create the kind of light-hearted, good-humored approach to writing about metal that those three achieved, though I’d never claim my own writing is in their league (they picked me as Mr. April 2010 in their “Panty Raid” series, but only because I kissed their asses so much that I got lip burn).

I’ve been using the past tense so far, because around the beginning of 2011, the RiB posts started to become less frequent, and there hasn’t been a new RiB post at all since March 3 of last year — until today.

Today, Julia announced that she is back and ready to start things up again at RiB (she says Elise isn’t ready to keep up with RiB at the moment, but maybe that will change). She asks for the support of readers to help get the site off the ground again. She asks these questions: “So what do you say? Shall we give this another go?” To me, these are rhetorical questions, because the answer is obvious: Fuck yeah.

I know some of you NCS readers were fans of RiB, too. You should go over there and show Julia some support. Those of you who never came across RiB before it went on hiatus should check it out. I say that selfishly, of course, because I want to see the old RiB up and running again. But I also think many of you will find something to like in the days ahead.