(Yesterday, we posted BadWolf’s review of the March 23 Toledo stop on GWAR’s headlining tour, which also featured Municipal Waste, whose new album The Fatal Feast-Waste in Space was released on April 10 by Nuclear Blast. Before the show, BadWolf caught up with MW’s frontman Tony Foresta and here’s their discussion.)

BW: So this is record number 5. What are your thoughts on Municipal Waste five records in?

Tony: I think we got better. I think the last record was good, there are some hits there, but on this one we definitely jump back up. Some people said it’s the best thing we’ve ever done. As good as our earlier Earache stuff. As long as it’s not shitty I’m stoked. We put more effort into this one than anything else we’ve ever done.

BW: There was a video of you guys in the studio with a piano.

Tony: Yeah, that was our buddy Lance, who records the vocals. He had that huge piano so we just recorded a video to confuse the shit out of people, make them think there’s a waste track with a piano. 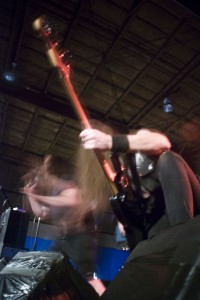 BW: Man. I was looking forward to that.

Tony: There’s a Moog. Steve [Moore] from Zombi did a couple guest tracks.

BW: That makes sense. It is Waste in Space—why space?

Tony: We were kicking that idea around since the first album came out. It’s always been ‘when will we do the space record?’ So many bands have done it before, so when we were creeping up on our fifth album it was time.

BW: Was anyone reluctant?

Tony: Well our drummer Dave [Witte] was a little hesitant but then he caved in, like fuck it this is awesome. He saw the album cover and he was sold.

BW: You’ve done sci-fi before though—there was a song about The Thing on Hazardous Mutation.

Tony: I love that movie.

Tony: Yeah, Star Wars doesn’t count. I really like Event Horizon. I like the concept of hell in space.

BW: The ultimate metal concept. So you’re on tour with GWAR—that’s not the thrashiest tour . . .

Tony: I don’t think we’ve ever done an all-thrash tour other than when we went out with Destruction. We don’t try to put together an all-thrash package. We try to go out with lots of kinds of metal. We even went on tour with a pop-punk band: Off With Their Heads. They’re on Epitaph, they’re great.  We just try to mix it up with all the shit we’re into, punk, thrash, grind, old school heavy metal, just rock.

BW: If you’re into all of that, why does the Waste stay in that SOD-inspired vein? Not that I’m complaining.

Tony: We’re not trying to do a Reload. We’re a thrash band. We know what we are. When we get the urge to do a different style of music we’ll start another band, that’s why we all have a million side projects. We’re a thrash band, we never said we were going to do anything else and we aren’t trying to be. We get weird on some songs, but we know what people want and what we want from ourselves. 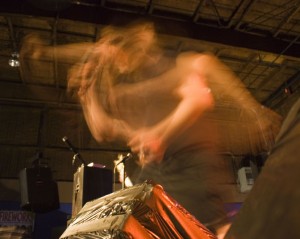 BW: Does it ever feel constraining to know that people want one thing from you, and if you deviate too much you’ll disappoint them?

Tony: It does. When we started we didn’t give a fuck. We still have that attitude, but you can’t help but think when recording a song that thousands of people are going to listen to this so you can’t blow it off. They have hopes and expectations. It’s a heavy thing to take in. I am still amazed by it. People care about your band and support you—that’s important to us. At the same time we’re going to write whatever we write. I think that’s what people like about us, is that we stick to our guns. We’ll never write something to win people over, but we write stuff that people who listen to our band will want to listen to. We’re never going to tour with Arctic Monkeys or ask them to play with us… sorry, I’m just pissed at Metallica today

BW: What do you think about the Metallica Orion fest?

Tony: Its cool that they just announced a bunch of heavier bands, but it’s bullshit that they’re on the mainstage with like Avenged Sevenfold and The Arctic Monkeys. They should be supporting the people who supported them all these years. Why not put Landmine Marathon on the mainstage? Why not put all these up-and-coming metal bands on that stage and support the music that supported them for the past twenty-five plus years? I don’t know what they want to do, like be an indie rock band and hang out with Lou Reed? They should just do side projects for that. I don’t understand the need to alienate their fanbase.

But who am I? I’m just some guy in a hardcore metal band. I don’t push millions of copies. They must be doing something right.

BW: But who the fuck cares if you sell millions of copies?

Tony: I sure don’t, but that’s what people would say to me. What the fuck do you know, guy, you don’t sell millions of copies. But I also don’t give a shit! The bottom line is they should support more thrash bands and people and music that have been supporting them. It’s sad that they aren’t doing that.

BW: OK, so if you were to support an up-and-coming band, who would it be? You’re sort of a vet now. 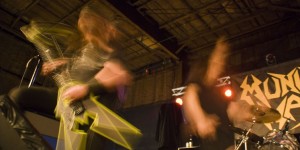 BW: I’d love to see Midnight on MTV. That would be hilarious.

Tony: I’d love to see Midnight everywhere, but too many kids listen to hip-hop instead of metal. At least in the States, it’s different elsewhere.

BW: Those are mostly sludge bands. What do you listen to, like, when you have an hour ’til the show and you’re taking a walk and basking in the urban decay of the Midwest?

Tony: I’ve got my workout mix on me right now. I was running so I have crazy upbeat music like old Battalion of Saints and Final Conflict,  Discharge—good stuff for an elliptical. Wolfbrigade.

BW: So you guys have this reputation as the drinking band. What do you drink?

Tony: I like whisky a lot. Jameson is my favorite right now. I don’t drink as much beer as I used to; I want to get fucked up quicker and not slosh around with a full stomach. I drink four beers compared to the eighteen I used to do.

BW: What’s the liquor you don’t want to touch?

Tony: Southern Comfort. I had a bad experience with it in high school. One sip of a SoCo just fucks with me. I’ll get a flashback. It used to be that way with tequila, but now we’re friends again.

BW: So the Waste has gone to space, where will the Waste be in two years when you’re done touring?

Tony: To sleep. In two years we will go the fuck to sleep. We do have a split coming out with Toxic Holocaust probably sometime this summer. After that we have another split with a band I won’t say yet. We have EP’s coming out that I can’t tell you about. But yeah, in two years I will go to fucking sleep.

(Photo credit: Nicholas Vechery — for all photos after the pair at the top of this post.)