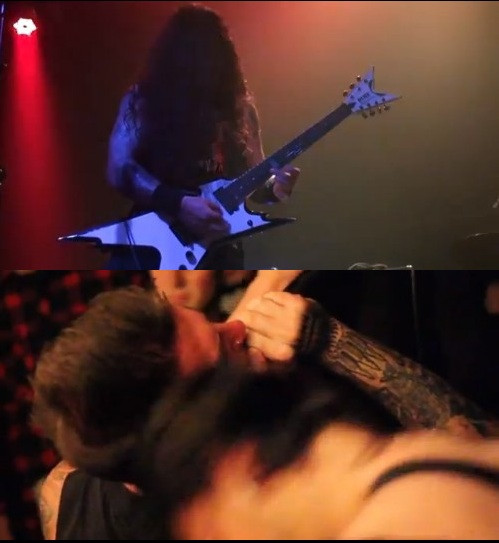 In this post, I have a few videos to start off your school-week, work-week, looking-for-work-week, or completely-fucking-off-week with a bout of headbanging. Because nothing sweetens up schooling, working, fruitlessly job-hunting, or fucking off like headbanging, am I right?  Yes, I am right.

Brazil’s Krisiun is currently finishing up a U.S. tour with Sepultura and Death Angel (the remaining dates are here). On April 15, they played Englewood, Colorado, and Superskum filmed a big chunk of the set. After the jump, I’ve embedded three of the song performances: “The Will To Potency”, “Ravager”, and “Combustion Inferno”. The video and sound quality are very good, and the music is pure spinal trauma.

In February I reviewed the 2011 album by Portland’s Elitist, Fear In A Handful of Dust. Among other words, I penned this immortal line: “Heavy fuzz, slamming or massively groaning chords, beefy bass, tremolo needling, and psychedelic swarming: these are among the implements of a wrecking machine that’s utterly heartless and wholly engulfing.” Today the band uploaded a video of their performance in Portland on April 28. The video includes two songs, “Tower of Meth” and “A Howling Wind”.

The video was filmed by Nick Gattman, and he did a helluva job. The band played this set on the floor of the venue, with no breathing room between them and the tightly packed crowd, and the camera viewpoint makes you feel like you’re right there in the middle of it. I love it when a band play on the floor, though I don’t get to see that happen much. Doesn’t take much for a vocalist to be consumed by a mosh pit, as happens in this video. It also exposes the band to loving caresses from audience members, which also seems to be happening in this video. But there’s no love in the music . . . it’s a mix of doomed, corrosive sludge and rancid death-grind blasting. Much fun to watch . . . after the jump.