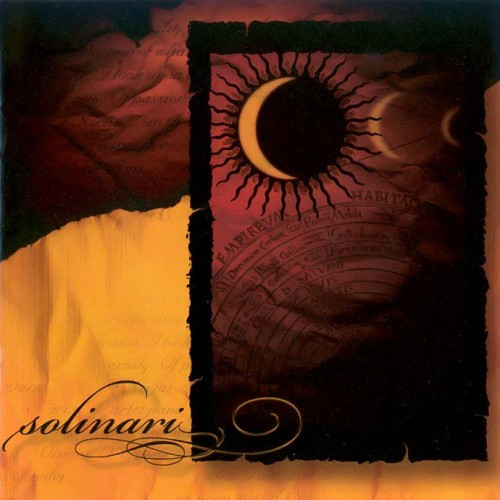 (Guest writer Mike Yost returns to NCS with this reflection on his introduction to metal.)

It was a small music store tucked into the side of an outdoor mall just south of Hill Air Force Base, Utah.  I was flipping through a stack of used CDs (remember CDs?) and found this subtle yet intriguing album cover.  It had a hand-drawn picture of a solar eclipse with a diagram of our solar system labeled in Latin.

I sat on a small stool near the cashier, sticking the disk into their CD player.  I pulled the headphones over my head and pushed play.  A sense of gloom coiled itself tightly around my body, and I couldn’t help but smile.

Listening to Morgion’s Solinari is a bit like being dragged slowly out of a bog just before you’re pulled under.  As you lay on the ground gasping for air, your faceless rescuer comforts you with sluggish tempos, mournful whispers and haunting keys.

Then the tempo quickens.  Guitars grow loud and angry.  The whispers mutate into indignant growls.  You watch helplessly as your rescuer picks up a large rock with both hands.  The music surges to its apex, and the rock comes crashing down on your chest over and over until it breaks through your ribcage.

The music then subsides.  Acoustic guitars fill the void, and your rescuer tosses your broken body back into the bog, watching silently as it sinks beneath the surface.

It was the first time I heard doom/death metal.  I found a bastion.  A medium to purge the past.

Almost ten years earlier I stood next to my older brother in our backyard.  The sun was sitting comfortably in a naked sky.  Not a cloud to be seen.  The wind blew hard as my mom dug a small hole.  My brother was visibly annoyed, but he knew better than to say anything.

She gathered all of my brother’s cassette tapes into a pile. (Remember tapes?)  Then my mom set them in the pit, coated them with lighter fluid and lit a match.  As the music of Def Leppard, Huey Lewis, and a smattering of 80’s hair bands melted beneath dancing flames, my mom told us how she was clearing the house of demons, something her church told her she had an obligation to God to do.

I was young, incredibly naive, and eager for my mom’s approval.  I became convinced Satan was ensconced in secular music and vowed never to listen to it—not even the radio.

But the metal bug had already hatched in my brain and was eating its way through my temporal lobe, laying eggs along the way.

I started listening to Christian metal bands.  To my surprise, my mom didn’t care (as long as it was Christian music).  But the teachers at the religious school I attended told me electric guitars were instruments of the Devil—that I should burn my albums.  I went out and bought more.

Then I graduated high school and joined the Air Force—escaping home and the church. I gave away all my Christian CDs, looking for something which reflected my anger at a church telling mothers to burn their kids’ music.  My frustration at having to remain in the closet because of Don’t Ask, Don’t Tell.  My despondency that I was stupid enough to believe Beelzebub lived inside a compact disk packed with digital data.

When I listened to Morgion for the first time, I found salvation in the very music I was taught would damn me forever to perdition.

I went back to that store knowing next-to-nothing about the metal.  But those eggs embedded in my brain began to hatch.  Emperor’s IX Equilibrium: A wall of swinging sledgehammers that pulverizes your bones into a fine powder (used by Ihsahn to season his meals).  Daemonarch’s Hermeticum:  Infectious riffs and guitar solos that jab at your ears just before Fernando Ribeiro’s vocals claw your face from your skull.

I couldn’t listen to those albums enough.  Some of the airmen I worked with cringed when I played them in the shop.  One guy refused to carpool with me after Morgion’s “Nightfall Infernal” bellowed out of my truck’s speakers at top volume.

My brain is now a festering, writhing swarm of metal.  A pulsating hive spawned by an innocuous death/doom metal album sitting in a small music store in Utah.

Check out the song below.  Sinking slowly into a bog with a large hole in your chest never felt so fucking great.

EDITOR’S NOTE: Every metalhead has a story about how they were introduced to metal. If you feel like sharing your own tipping point, leave us a comment.  And comments about Mike’s post are also welcome.

12 Responses to “A CITADEL CALLED MORGION”