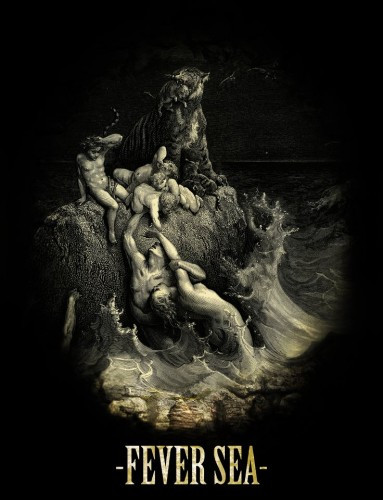 There once was a band from Bristol in the UK called Rosicrucian. The music they played was a marriage of tumultuous black metal blasting and sweeping ambient melody, part of it furiously ripping and part of it ethereal and sublime. They released a five-song EP in November 2011 called Beneath the Waves, which our Andy Synn gave a very positive review here. He called it a “flowing, tide-driven take on post-black metal dynamics”.

Rosicrucian are no more. But the band haven’t exactly broken up. Instead, they have a new name: Fever Sea. They have a new sound, too. So now we need to ask, what is Fever Sea’s take on post-Rosicrucian dynamics?

And we have an answer, because as of yesterday Fever Sea released their first EP — The Deluge — for free download on Bandcamp. There are only three songs on the Fever Sea EP, though they amount to more than 20 minutes of music — and they’re all very good. In fact, though I enjoyed Beneath the Waves, I’m liking The Deluge even more.

As for the style, the band have moved in the direction of a new kind of marriage — kind of a three-way between prog metal, melodic black metal, and at times the sort of dark, doom-weighted sounds I tend to associate with that Finnish triumvirate of Insomnium, Omnium Gatherum, and Before the Dawn. Or at least that’s how I interpret it. The band seem to prefer the description “Atmospheric and Triumphant Post-Black Metal”. Whatever labels you might choose to afix, Fever Sea have made an auspicious start on their new life.

“Genesis In Retort” is a blaze of furious riffing, percussive blasting, and jagged vocals, but that’s mixed with ringing melodic guitar leads, a bounding bass line, and clean, high vocals that trade words with the bestial growls in a kind of call-and-response exchange.

“The King Immersed”, at almost 10 minutes in length, is a musical voyage across changing seas. The song’s beginning is a comparatively soft, dreamy segment marked by clear, clean vocals (which are much better than on Beneath the Waves) and an entrancing melody. The music briefly builds in intensity and then gives way to more ringing guitar arpeggios over a thumping bass-and-drum undercarriage, all of which is a prelude to the explosion of harsh vocals and attacking instruments that follows. That call-and-response motif marks this song until about the six-minute point, when a slow, doomy, segment energized by cavernous vocals takes its place. Tinkling guitar notes provide a bridge to a powerful ending that draws together all of the preceding pieces. A very impressive song.

The final track, “Antideluvian”, builds a dramatic, even epic, atmosphere. No clean singing on this song, nothing but teeth bared in predatory roars and howls. Reverberating guitar notes mix with heavy pneumatic riffing and booming bass chords. There’s a dark, ominous, feel to the song, a sense of black power building overhead before the deluge is unleashed as massive, groaning chords appear near the end.

You can freely download the whole EP or individual songs at Fever Sea’s Bandcamp page via this link. You can find Fever Sea on Facebook here. Now, here’s the music:

4 Responses to “SHORT BUT SWEET: FEVER SEA – “THE DELUGE””