Yesterday, Guitar World began streaming a song from the album called “Introspection”, which features guest vocals by Devin Townsend. I heard it for the first time through that stream (see above re moving between safe houses). I have mixed feelings about the song.

At first I thought it was going to be a soporific, proggy kind of thing, much like Opeth’s most recent album. Then it started to grind and hammer, and the three-way blending of Ihsahn’s clean and harsh vocals and DT’s distinctive voice was nice. I guess, in retrospect, it is a proggy kind of thing, but it has a skull-scouring quality, too, sort of like what Opeth used to do (and what DT did on Deconstruction). I’m just not immediately satisfied by the combination. It could grow on me, but I still have that computer-tethering issue. What do you think? 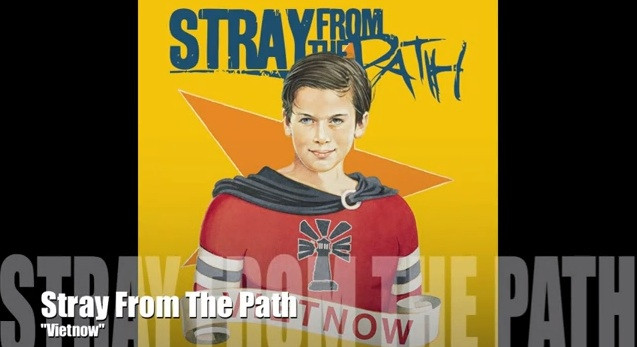 STRAY FROM THE PATH

I don’t really have a good explanation for combining this next song with the first one in this post. They really don’t belong together in any universe, except maybe one in which dogs breed with cats. But I heard both of these songs yesterday, and they’re both on my mind this morning, so fuckitall.

The last time we checked in with this Long Island hardcore band, their song “Bring It Back To the Streets” set off a discussion between me and TheMadIsraeli, which in turn prompted him to write a post about the loss of community brought about by widespread, easy access to digitized music (here), which in turn led to a flurry of comments.

Well, Stray From the Path is back with a new song, and TheMadIsraeli made sure I didn’t overlook it (even though it took me a week to remember that I needed to hear it). This song is a cover of Rage Against the Machine’s “Vietnow”. I really liked the original of the song, back in the day. This cover is pretty cool, too. Nice guitar tone — like a wrecking machine chewing up concrete girders. Nice vocals — the kind that sound like they left the vocals chords bleeding. I mean, I’m not saying we really needed a cover of “Vietnow”, but I got some pissed-off gutter groove out of this, and that’s kind of what I needed this a.m. What do you think?

4 Responses to “IHSAHN + DEVIN TOWNSEND and STRAY FROM THE PATH”