It also looks like it will be a very nice album, with Emperor covers by the likes of Demonical, Helheim, Horna, Taake, and Setherial. I’ll give you the full tracklist rundown after the jump, but the news for today is that the album has gone up on Amqzon for pre-order, which means you can hear snippets of each song here.

In Honour of Icon E – Tracklist:

1. SVARTLAV – Introduction
2. SALTUS – Curse You All Men!
3. TROLL – Towards the Pantheon
4. INFER – Ye Entrancemperium
5. DEMONICAL – Night of The Graveless Souls
6. HELHEIM – Witches Sabbath
7. MIDNIGHT ODESSEY – Cosmic Keys to My Creations and Times
8. SILVA NIGRA – Moon Over Kara-Shehr
9. NECRODEATH – Lord of the Storms
10. HORNA – Wrath of the Tyrant
11. KARPATHIA – Ancient Queen
12. ANCESTRAL VOLKHVES – With Strength I Burn
13. MESMERIZED – Empty
14. CRIONICS – The Loss and Curse of Reverence
15. TAAKE – I am The Black Wizards
16. SETHERIAL – Inno A Satana

I also heard a new song by Ulver. It’s from their new album Childhoods End, which was released this week. Here’s the cover for that: 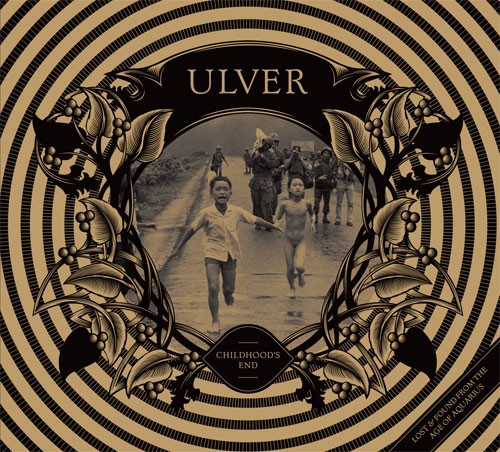 The song is called “In the Past” and was originally performed by We the People. Like everything else on the album, the song is a cover of something released in the 60’s. It’s a catchy non-metal song, and I like the spacey/spooky/freaky guitar tone on Ulver’s cover, as well as the vocals (though they’re clean). Though I doubt I’ll get this album, I did find myself involuntarily humming the song to myself long after I heard it.

Bracelets of Fingers (The Pretty Things)
Everybody’s Been Burned (Byrds)
The Trap (Bonniwell’s Music Machine)
In the Past (Chocolate Watchband)
Today (Jefferson Airplane)
Can You Travel in the Dark Alone? (Gandalf)
I Had Too Much to Dream Last Night (Electric Prunes)
Street Song (13th Floor Elevators)
66-5-4-3-2-1 (Troggs)
Dark is the Bark (Left Banke)
Magic Hollow (Beau Brummels)
Soon There Will Be Thunder (Common People)
Velvet Sunsets (Music Emporium)
Lament of the Astral Cowboy (Curt Boettcher)
I Can See the Light (Les Fleur De Lys)
Where is Yesterday (United States Of America)

The last time I heard music like that Ulver cover was when I saw Ghost perform on the recent tour with Mastodon and Opeth. Maybe if Ulver dressed up like this, they could get metalheads under the age of 30 to listen to Childhoods End: 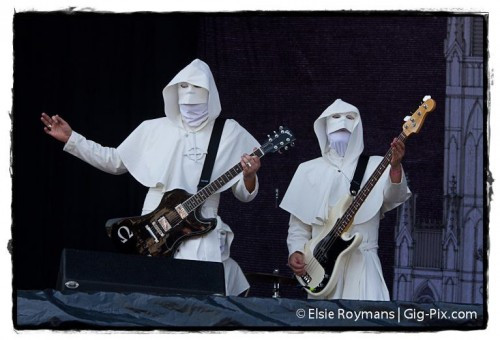 Yep, that’s Ghost, sporting some new summer attire. I didn’t see that pic this morning. I saw it on Metal Sucks earlier this week, along with a very funny piece of commentary by Vince, which I recommend if you need a few guffaws.

Speaking of Ghost-like music that’s poppy and hooky and still palpably evil and cool, I also saw the new music video by Sweden’s In Solitude over in Brandon Stosuy’s column at pitchfork.com (here). The song is “To Her Darkness”, and it’s from the band’s 2011 debut album on Metal Blade, The World.The Flesh.The Devil. Having now heard the song in the context of this superbly creepy video, I feel like a dick for ignoring the album last year just because of the clean singing.

I really like this song: Excellent riffs and cheese-free vocals and coolness and evility.

Speaking of Brandon Stosuy’s pitchfork column, it also includes new music from Nachtmystium and Atriarch, plus accompanying interviews — all of which is well worth your time.

I saw some tour news of high interest today, too: Dark Funeral and Grave, from Sweden, will be touring North America this September and October! When this tour reaches Seattle, I will definitely fork over my money to see those two bands, neither of whom I’ve yet gotten to see on stage. Here’s the poster: 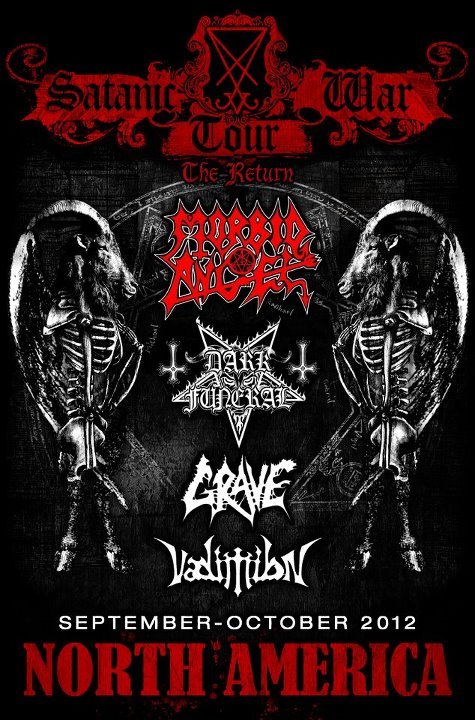 There’s some band named Morbid Angel along for the ride, touring in support of their album Illud Divinum Insanus. I hear that album blows. I wonder if they have any other songs worth hearing. This is the tour schedule:

Speaking of tour news, here’s another one worth mentioning: Katatonia, The Devin Townsend Project, and Paradise Lost will also be touring North America in September (and thank you to TRex for the tip on this one). Here’s the poster: 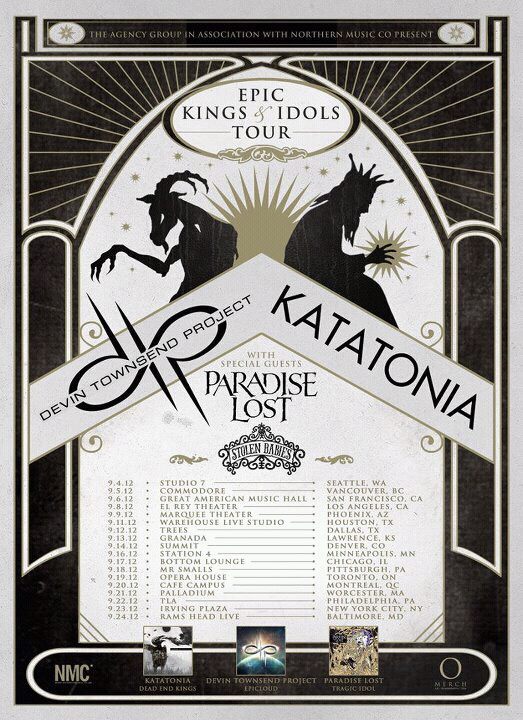 Oh, and guess what?  The tour kicks off in Seattle.  Yes indeedy, I will be there. In case you can’t make out the dates from that poster, here they be:

Here’s one more thing I saw that I highly recommend: CVLT Nation is streaming the entirety of Marduk’s new album, Serpent Sermon, at this location. Andy Synn reviewed the album for us here, and I’m telling you straight — it’s one of the best collections of extreme metal I’ve heard all year. Now’s your chance to hear it in full.

Okay, I guess I need to wrap this up, but I want to do it in style. And this next piece of album art has got some style, don’t you think?  It just kinda cries out Romance, doesn’t it? 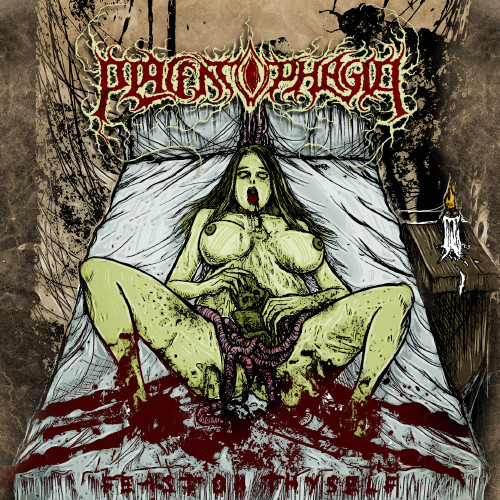 It’s the artwork for an EP titled Feast On Thyself, which will be released on July 20 by a female-fronted band from Ottawa, Canada, who call themselves  . . . Placentophagia. Actually, I’m not 100% sure whether this is the art for the EP or the art for a single from the EP called “Flesh Fetish”, which Placentophagia will be giving away for free at upcoming shows.

The band were kind enough to send me an mp3 of that single today, and they’ve also put it up on YouTube here. To give you an idea about the music, here is the band’s Facebook description of their interests:

We enjoy nursing injured wildlife back to health…
We love the sweet sound of babies sleeping…
We like to blog about granola snacks and organic lifestyles…
We believe in harmony and peace, justice and love…
😉
Read our lyrics – it’s all in there.

I think, possibly, maybe, this is tongue in cheek. Having heard “Flesh Fetish”, I think what Placentophagia really meant to say is that they enjoy eating injured wildlife raw, impaling sleeping babies with meat skewers, force-feeding granola snacks to hispters through their rectums, and making a laughing stock of all notions of harmony, peace, justice, or love.

Here’s the song, which fans of Dying Fetus and Cannibal Corpse ought to find appealing:

You can snoop on Placentophagia at Facebook via this link, or check out their official web site here.

Alrighty, that’s a wrap.  I kind of loaded up this post because I expect to load myself up tonight and therefore won’t likely have a fresh new post ready at the usual hour on Saturday morning. But it will come . . .

15 Responses to “THINGS I SAW AND HEARD TODAY”