I follow a ton of bands on Facebook, so many that I can no longer get through all the status updates every day. But I try to stay abreast of what’s happening, in part to find things worth mentioning on NCS and in part because I’m just interested in the scene. Plus, I know people in some of these bands, especially the ones in Seattle.

These are some of the updates I saw late yesterday.  I picked these for a reason, which you may figure out for yourself as you read through them, though I’ll make the reasons explicit at the end.

Boston police arrested Javier Reyes of AAL outside a venue following a show, manhandling him and his friends for what seems to be no good reason.

I’m hoping for coitus, but may have to settle for a cookout.

One of the tracks on Ephel Duath’s forthcoming EP began streaming this week — about three years after their last release. 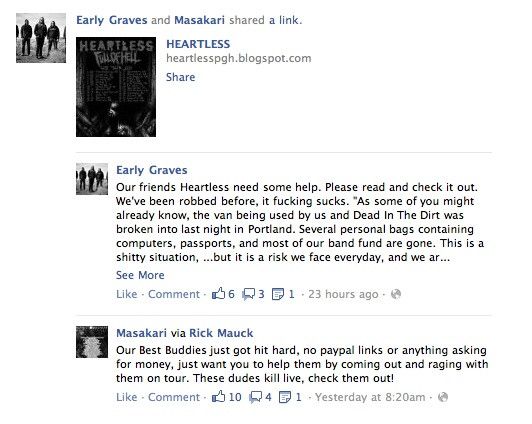 Yes, in addition to all the other hardships of playing in an underground band, there’s the ever-present risk of drug abuse. 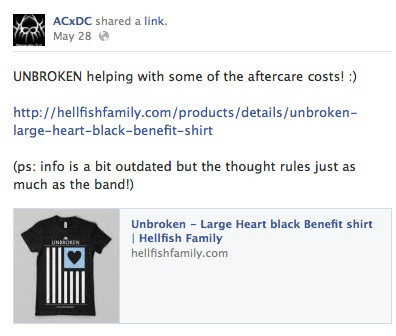 What this is about: ACxDC [Anti-Christ Demon Core] is an excellent SoCal powerviolence band.  Their vocalist Sergio has newborn twins.  One of them, Savina, was born with a hole in her heart. She had surgery on May 3 to repair it. Sergio and his wife can’t afford the surgery and aftercare based on their own resources, and the hardcore community has been rallying to support them.  More details are here.  Here’s a post-surgery photo of Savy: 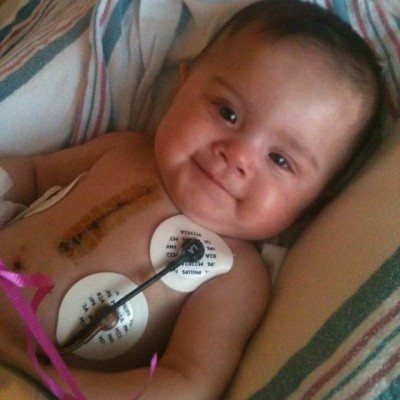 She’ll live with a very metal scar in a very prominent place for the rest of her life, but she will live, and she now has a connection to the underground scene that may mean a lot to her someday.

Remember, with the exception of Savy’s photo, these are all updates I saw for the first time on a single day — June 1, 2012. I ventured outside my FB news stream only twice, to check up on the latest news about Savy on the ACxDC page, because I knew about her situation previously, and to catch up with Drag the Lake, since I know they have an EP on the way. So this really is just a snapshot . . . and it’s not all that different from what I see almost every day.

So, what do all this mean?

It means that if you want to make music in a metal band, you’ve really got to have the fire in your belly.  You have to really want it, but just wanting it isn’t nearly enough.  You have to work like a demon.  You have to be determined and patient and resilient — and optimistic. You have to believe in yourself, because there will be plenty of times when it seems that no one else does. You also can’t take yourself too seriously. And a good sense of humor is also important — because, to be honest, what you’ll be doing is ridiculous and insane on many levels.

You have to be good, too, but being good isn’t enough either.  Underground metal is a meritocracy, in the sense that quality is required for success — with success being defined as the ability to continue creating music and performing it for at least a little while longer.  But it’s not a complete meritocracy, because talent doesn’t guarantee success.

Lots of very good bands fold, either because they fail to spread their gospel to enough people or because key members just run out of gas (or think there will be greener pastures somewhere else) or because the real world intrudes and fucks things up.  In fact, based on my observation, the vast majority of metal bands fold — it’s just a question of when.

Sometimes, they fold because there’s just not enough money to keep things going, especially as guys get older and start thinking about things like starting a family. Even without family, most jobs that help pay the daily bills aren’t very accommodating to things like touring; employers have an odd tendency to expect you to show up on a regular basis for the work they’re paying you to do.

And it goes without saying that creating metal is an enterprise that almost never pays for itself, unless you’re really a BIG NAME.  You have to beg for money in just about every way you can think of — beg people to buy merch, beg people to come to your shows, beg for gas money and a place to sleep on the road, try to sell your skills to others for damned little money, etc., etc., etc.  And most of the time, it’s still not enough, especially when unexpected expenses pop up, like having to fix a broken-down van or being arrested (!!!) or getting your gear stolen by douchebags who deserve to be beaten within an inch of their lives, but will never be found.

No doubt, making music has its rewards, even if they’re not monetary. That much is obvious, or damned few people would be doing it. But the rewards can often be meager and fleeting, and emotional support is vital. In fact, I suspect that every little sign that your music means something to other people (e.g., by seeing a few more Facebook likes or a video of a fan covering your music) is like water in the desert. Those of us who are fans ought to remember that.

Still, even when making music is its own reward, I think you’ve got to have a few loose screws to dive into this scene as a musician, because any mature, rational assessment of the pro’s and con’s and the odds of success and failure isn’t going to end well. But what the fuck, I’ve always liked people who have a few screws loose. Those who don’t usually turn out to be boring. I suspect anyone who’s reading this post feels the same way, and you probably have a few screws loose, too. I know I do.

As a fan, all I can say is that I’m damned glad there are people out there with more passion than sense. I don’t know what I would do without metal. It has helped me through some real rough patches, including some very recent ones, and it makes life SO much more interesting, so much more ALIVE. Trying to show some support to metal bands through this site is kind of my way of saying thank you for that.

It’s a strange community that we’re all a part of. Sometimes, and maybe more often that not, metal is one of the few things we all have in common. But it does seem that the music means a lot more to us than it means to fans of other musical genres — there’s an intensity to our passion as fans that I don’t see in fans of other kinds of music. It’s an intensity that seems to match the passion that drives musicians to fly themselves into a gale-force wind of near-impossible odds.  And that’s very fucking cool to see.

Well, enough of this rambling. In hindsight, I’m not sure there was really any point to this post after all, other than expressing some things I’ve been thinking about lately (and have thought about many times before).

As a parting word of encouragement to all you musicians out there who grind yourselves into the pavement trying to make a go of band life in the underground, I’ll just say that if you were really raking in the money and basking in the glow of fame and fortune instead of struggling and begging, you might well be creating something awful and self-indulgent like Lulu, and thereby embarrass yourselves and your offspring for many generations to come.  So there’s that.

UPDATE:  I re-read what I wrote, and I’m left uncomfortable by that line about people “with more passion than sense”, which sounds kind of insulting, and that’s not what I intended.  Yes, I do think pursuing a career as a metal musician requires a certain kind of mental wiring that’s undaunted by the prospect of swimming against the tide.  But I also want to make clear that I have a lot of admiration for people (musicians or otherwise) who chase their passions even when it seems crazy to do it.  And the big problem with not making the chase is the risk of being left, forever after, wondering about what might have been. That kind of regret can be much worse than the regret that comes from trying and not succeeding.

11 Responses to “A SNAPSHOT OF THE UNDERGROUND”