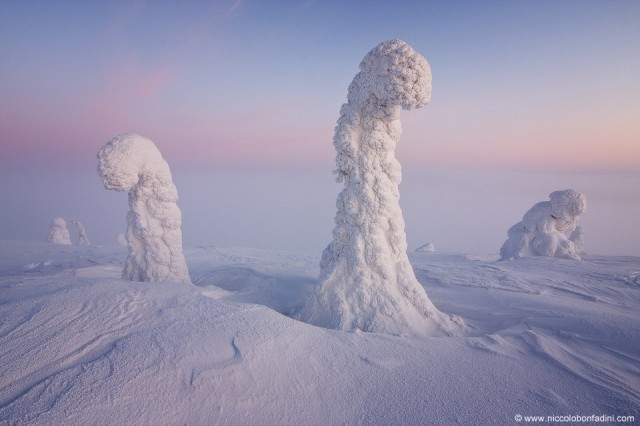 Welcome to another, long-delayed edition of THAT’S METAL!, and thank-you to all the NCS metalheads who’ve been sending me candidates for this series. As you’ll see, I’ve used quite a lot of them in this post, and have stored away others for future use.

For newcomers, this series is the one place at NCS where we don’t talk about music. Instead, in these posts we focus on photos, videos, news reports, and other items that aren’t music, but still seem metal. Here we go:

Item One is up above, and thanks to Mike Yost for sending it my way. This is not a still from the next sci-fi or horror blockbuster coming to a theater near you. This is a photo taken last winter in Finnish Lapland, where temperatures fall below freezing and snow is driven by the wind. The picture shows trees that have been coated in snow and ice. And in the sky above them is a phenomenon called the Belt of Venus, a band of pinkish light produced by a rising or setting sun (about which more can be learned here).

I’ve included one more photo taken by the same photographer after the jump, which makes it more obvious that these are trees. And yes, these pics are metal, in part, because they were taken in Finland. 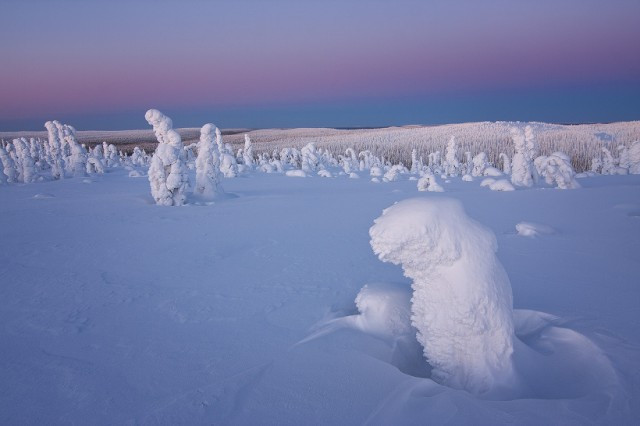 (Here is the source from which Mike found the first photo, and I found the second one at this location. The photographer is an Italian named Niccolò Bonfadini.)

Trees seem to remain standing despite truly brutal weather simply because that’s what they do. Sometimes people can remain standing only through a tremendous force of will. Thirty-two year old Claire Lomas is a good example of that. She lives in Leicestershire, England. In 2007, she was thrown from a horse, breaking her neck, her back, and multiple ribs, and puncturing a lung. The accident left her paralyzed from the chest down.

But last month, she finished the London Marathon — 16 days after it began. She walked the course in a bionic suit created by an Israeli entrepreneur named Amit Goffer, covering about two miles a day. At the end, hundreds lined the streets as she made her final steps to complete the race. Three mounted members of the Household Cavalry gave her a guard of honor as she crossed the finish line.

Claire wasn’t eligible even to be listed in the race results, because you have to finish the race the same day for that, and of course she received no medal — except for the fact that about 12 other competitors who did receive medals gave theirs to her. This is Claire: 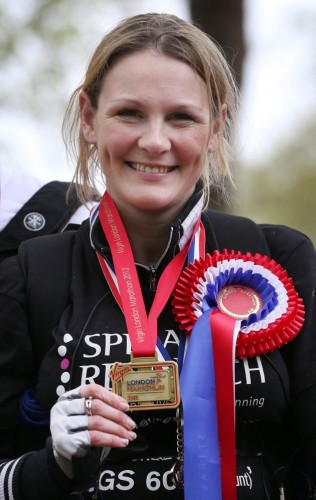 And this is Claire again, finishing the marathon with the mounted honor guard behind her: 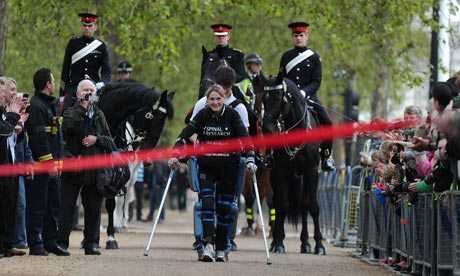 And if that’s not fuckin’ metal, I don’t know what is.  (Thanks to Andy Synn for sending me this story. Further details are available here.)

Life exists everywhere on the planet, even in places you’d think would be the most inhospitable to life. The general rule, as far as I can tell, is that the more inhospitable the environment, the weirder the life forms. For example, let’s consider this next video.

It was filmed by a camera on a submarine near a deep sea drilling site at a depth of about 5000 feet (1500 m). The video first appeared in April and went viral, which launched a lot of speculation about what was being shown. Early on, some people guessed that what you’re about to see was a whale placenta. Don’t ask me why supposedly knowledgeable people were guessing whale placenta.

Ultimately, it was established by people who know what they’re talking about that this thing is a deep-sea jellyfish called Deepstaria enigmatica, which sounds like the name of an avant garde black metal band. Those white objects visible inside the creature are gonads, or in layman’s terms, jellyfish balls. There’s a lot more detail about this video and Deepstaria enigmatica at this location, and this Facebook page has a lot of stuff about the creature, too, including other pics and videos. Definitely metal.

(Thanks to Raven Stead for the tip on this video.)

You don’t have to go 5,000 feet below the ocean surface to find strange natural phenomena.  Sometimes even commonplace creatures can be caught doing . . . strange things.

This dude is just chillin’.  Probably listening to some drone.  (I saw this on The Presurfer blog.)

This breed of cat is called a Scottish Fold, and apparently it’s typical for them to sit upright. It’s called “The Buddha Position”.  Fucking hysterical.  Also metal.

(Credit to Alexis for the tip on this one.)

Well, enough cuteness. Let’s turn to something creepy again. So, here’s something to think about: When rivers flood and the water begins to invade the land, the instinct for survival causes creatures to seek higher elevations. These are photos of what happened when rising flood waters began to invade the town of Wagga Wagga in New South Wales, Australia (good name for a town, don’t you think?). 9,000 residents in the flood zone were evacuated, leaving the landscape to . . . spiders. 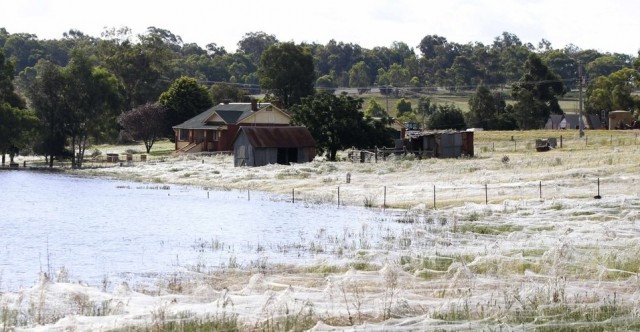 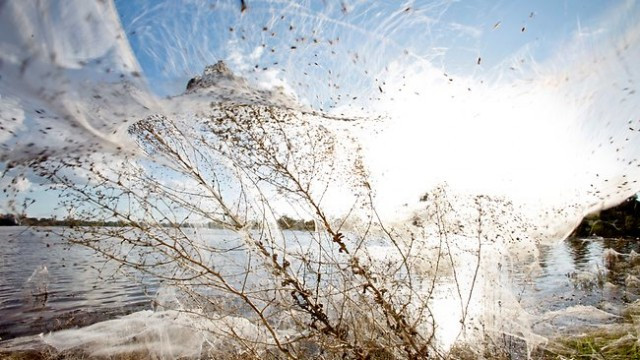 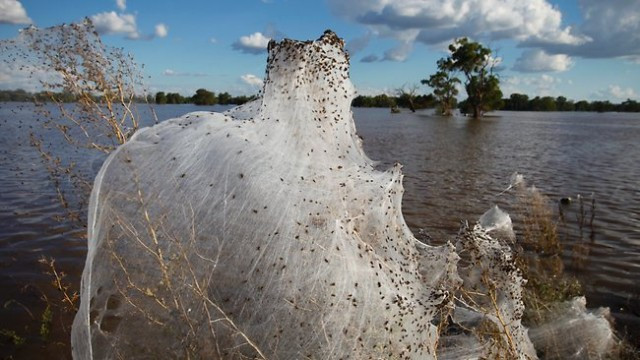 I don’t know about you, but if I were one of those evacuated Wagga Waggans, I’d just let the fucken spiders stay there and I’d move to Wonglepong, Humpybong, Burpengary, Cock Wash, or one of these other towns in Oz.  Spiders scare me, but when they take over a town, I have to admit it’s kind of metal..

(Thanks to Andy Synn for the link to these photos, which originally appeared at io9.)

This is a Phantom Corsair. It’s a prototype vehicle built in 1938. It had front-wheel drive and doors that opened electronically by pushing buttons. It was wide enough to seat four people in the front, including one person to the left of the driver. There is only room for two people in the back seat, but that’s because of space limitations posed by on-board beverage cabinets (fuck yeah!). It weighed more than two tons but could achieve speeds of up to 115 mph (185 km/h). 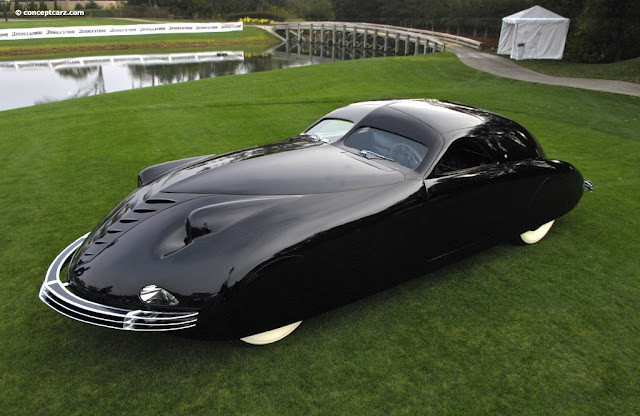 This is the only copy of the Phantom Corsair that was ever built. Plans to produce the car for sale were derailed when its designer — Rust Heinz of the H.J. Heinz family (ketchup) — died in a car accident in 1939. The Phantom Corsair now resides in the National Automobile Museum (also known as The Harrah Collection) in Reno, Nevada. This is one very metal car.

The following video shows a spirited debate that occurred in the Ukrainian parliament on May 24. The subject of the discussion was a piece of legislation that would elevate the status of Russian to a second language, equal to Ukrainian, in about half the regions of the country, including Kiev. Further details can be found here. The entire video isn’t as entertaining as the way it starts. Things calm down after the 3:00 mark — following the applause in the spectator gallery. 🙂

The author of the legislation, Vadim Kolesnichenko, said his legislative adversaries told him, “You’re a corpse, you have two days left to live, we will crucify you on a birch tree.”  Honestly, I’m surprised we haven’t seen this style of parliamentary debate in the U.S. Congress yet. But it seems to be par for the course in the Ukrainian assembly. In 2010, during the ratification of a treaty allowing Russia to lease a naval base, Mr. Lytvyn sheltered behind an umbrella as opposition members hurled eggs and smoke bombs at him. At least five people were injured in that discussion.

After that last item, I feel we need some balance. And so, to close out this edition of THAT’S METAL!, I give you . . . castelling!

What you’re about to see is a tradition that originated in Catalonia (Spain) near the end of the 18th century, and it remains popular there. On the one hand, it’s insane, especially when you see the children getting involved. On the other hand, it’s also kind of inspiring. Don’t leave this video too soon or you’ll miss a few epic collapses.

The motto of Castellers is “Força, equilibri, valor i seny” (Strength, balance, courage and common sense). To quote the author of the blog where I saw this, “Not a bad motto for life in general.”

Enjoy the rest of your fucking day.  I’ll have some actual metal music for you in today’s next post.