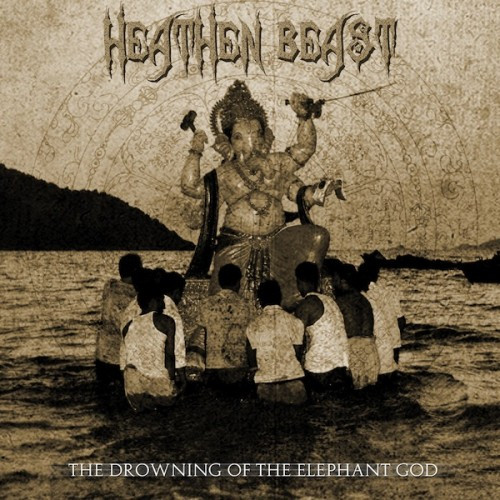 I’m no expert on India, and really, who could be? The country is so vast, its population so large and diverse, its history so ancient and complex, its cultures and traditions so multifaceted, that to me it seems almost incomprehensible. But though I’m no expert, I know from reading that it is the birthplace of four of the world’s major religions — Hinduism, Buddhism, Jainism, and Sikhism — and on top of that it has the third largest Muslim population in the world, as well as adherents of Christianity, Judaism, Zoroastrianism, and many other faiths. Looking at it from afar, it’s a place where daily life seems dominated by religious rituals, observances, and traditions of one kind or another.

Heathen Beast don’t like what they see. They are an Indian black metal band based in Mumbai whose focus is on religion, which they view as a destructive plague on mankind. This alone doesn’t necessarily distinguish them from black metal bands the world over, but they have a particular focus on religion in India, which means that the object of their anger and scorn is not Christianity (as it is for BM bands in so many other countries), but the influence of more locally important religions such as Hinduism and Islam and what they perceive as the destructive effect of those faiths on the people, the environment, and even the animals of their country.

Back in November 2010, I wrote about their debut EP, Ayodhya Burns, in this post. Recently, they’ve released a second three-track EP called The Drowning of the Elephant God. Thematically, the title track is about the Hindu festival of Ganesha (the elephant god of the EP’s title), which culminates in the immersion of painted Ganesha statues made of plaster in rivers, lakes, and the sea — a practice that has been releasing a multitude of toxic elements into water systems throughout the country (according to this article) for many decades. 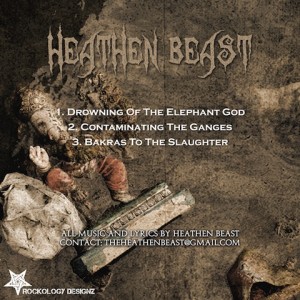 “Contaminating the Ganges” is about the pollution of the river Ganges — a river already filthy with raw sewage, industrial runoff, and the ashes of the dead — by the annual Hindu ritual of bathing in the river during another religious festival (a ritual practiced by more than 70 million people each year in the belief that it will wash away their sins). And “Bakras To the Slaughter” is about the butchering of animals in the name of religion, and more specifically about the Muslim festival of Bakra Eid, which involves animal sacrifice.

Heathen Beast’s mission is to produce a separate music video for each of the three songs on the new EP. Two of them have been released to date, the first of which was banned by YouTube until it was censored. These videos do NOT fuck around. They shoot straight for the heart of the matter, just as their music does.

The first video that was released was for “Bakras To the Slaughter”. That’s the one that YouTube banned until it was revised. You need a fucking strong stomach even to watch the censored version. What makes it particularly powerful is that it is composed of nothing but actual film clips showing animal sacrifices in India. It doesn’t take any editorializing to show this for what it is (in Heathen Beast’s view) — cruel and barbaric.

The second video is the one for “Contaminating the Ganges”, and it was just released yesterday. It is also composed of nothing but a montage of film clips, and it gets the point across pretty effectively, too.

The music is also powerful, caustic in the way of traditional second-wave black metal but fascinating and memorable in its incorporation of the tabla and ethnic Indian melodies. Heathen Beast write and play from the heart, and the strength of their convictions emerges in the music they’ve created on The Drowning of the Elephant God.

The new EP can be downloaded for free here or here, and I’m adding the SoundCloud player for the EP below the videos so you can check out the title track as well as the songs featured in these videos.

The “Bakras” video is (at least for now) airing in uncensored form on Vimeo, and I’m embedding that one first, followed by the censored YouTube version for those who may not want to take the full brunt of the original.