(DGR is in some kind of keyboard-pounding fugue state, with his third review in three days . . . and more are coming. Today, the subject is Ministry’s latest release, which is out now on 13th Planet Records. And at the end, we’ve got the just-released official video for the song “Ghouldiggers”.)

If any of you read my Electronica Clusterfuck of 2012 post, where I took on three decidedly not metal albums, then you’ll probably remember that I mentioned having a fondness for the various aggrotech genres, including industrial metal. No name is more synonymous with industrial metal than Ministry. They’ve influenced hundreds of bands, and frontman Al Jourgensen has to be eating people’s souls in order to stay alive long enough to kick out more music, given what the man has been through.

You may also recall that I sort of reservedly mentioned that I would try to work on something about Ministry, and well, here it is: My thoughts composed (as best I could) on Relapse, Ministry’s comeback album, and a hot mess in the form of about an hour of industrial metal.

What a goddamn odd release. That’s not saying anything new when it comes to Ministry, considering that they pretty much pioneered the way on odd things. With Uncle Al being completely batshit insane, taking on anything from politics to drugs to politics to…drugs, Ministry have always been a band with a ton of character. They’ve probably rubbed more people the wrong way than I could even think to count by being so far left that they’ve pretty much shot off of the planet and wound up near Alpha Centauri by this point. The fact that Relapse continues this trajectory isn’t shocking, not one bit. What is shocking is how much of a time capsule this disc really is. 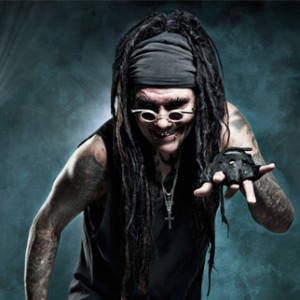 It’s Ministry in their comfort zone, recalling the industrial metal that they helped popularize in the late 80’s/early 90’s and even managing to put skits into certain songs. You read that right: full blown dialogue, shitty acting, story telling, and everything in between, skits.

I kid you not, we’re treated to Al being put on hold by his ‘management’ during one of the opening tracks. That’s riveting shit right there. Seriously, who remembers skits?! If that isn’t weird enough for you, Relapse deals in it in spades.

Not only that, but holy crap, is Relapse a looooong in the tooth album. I know it seems harsh to start picking things apart early in a review, but man, people need to know this. There are eleven songs on this disc, and the running time is something close to an hour, but man, does this thing feel like it takes an eternity and a half to listen to.

A couple of factors play into this, of course. One of them is the passage of roughly five years since Ministry’s last release, The Last Sucker. Since then, a new man has moved into the White House, we’ve seen the birth and death of a couple of different political movements, and hey, they even shot the guy I’d been told to fear since middle school. Hell, they actually shot the dude my mom was told to fear when she was in high school.

Naturally, this leads someone as locked-in to the 24-hour news cycle as Al to have a whooooole lot to say — and man, does he. If you think I was joking about that reference to the shooting of Bin Laden, we actually get a whole chorus in the song ‘Double Tap’  talking about how, “That man has got to go. Codename: Geronimo”.

If you’ve followed Ministry for any amount of time, you have to expect that everything is going to be painted with a pretty broad brush, with very little room for subtlety. It’s difficult to say whether that is due to the cause behind the music or simply because Ministry don’t like to paint in shades of grey.

If Relapse is your first experience with the band, let me just spell it out: The symbolism here is heavy-handed as can be. I don’t think the band could be any less subtle about what they’re trying to say if they had a giant hammer labeled ‘MESSAGE’ and were just brainpanning people with it. That’s how you wind up with  a song like ‘Kleptocracy’, which yes, if you hadn’t guessed, is about how the government is made up of thieves. 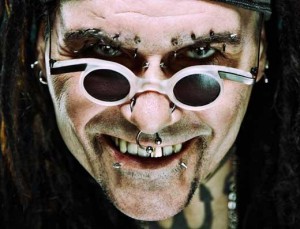 Of course, when politics isn’t being covered, then the songs are about drugs and alcohol and relapsing into the same past misbehavior. It’s meant to paint a common picture between society in general and the junkies who are portrayed, like the lovely gentleman on the album cover. Again, refer to previous giant hammer metaphor.

Another reason why this disc feels so long could be because of the Ministry ‘sound’. The guitar work here is about as driving and distorted as it has ever been. There’s constant shred throughout the whole disc, and not much room for any sort of melody outside of whatever chorus is being sung.

The guitars sound like an angry beehive that has been disturbed, and they just never, ever take a break. It isn’t like a death metal release, which is known for non-stop guitar work like this. A lot of the guitar work is pretty faceless, used only to keep songs going at a fast pace, just constantly chugging away. You get the occasional solo here and there, but they fall into the wall-of-notes school of delivery, with very few of them sounding particularly heartfelt.

Drum-wise, there is so much double bass work throughout the disc that, for the first time in a long time, I actually found myself actively disliking the repetition of exactly the same bass drum sound, over and over. It’s a hallmark of the Ministry sound, and usually it has worked because the songs have been of better quality. Here, because most of the music is long-winded and relatively middling, it just feels like the same drum sample is being repeated over and over, like a pulse meant to get into your ear drums and hypnotize you into flinging yourself off of a building.

My harping probably wouldn’t be so bad if the stuff on Relapse weren’t so heavy handed and cheesy, but this album doesn’t feel like a throwback — it feels like someone cracked open a time capsule and found the album in there. It sounds dated, but not retro, like the band somehow recaptured their sound. It just sounds like they found the blueprint for it, copied it word for word, and changed the messages from songs like “Just One Fix” and “N.W.O” to reflect modern day, and BAM!, new Ministry disc. 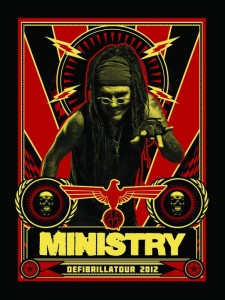 I like heavy metal Ministry, I do. The highlight songs on each Ministry release, for me, were the ones in which they decided to be really fast and really heavy, as opposed to the more computerized and mid-tempo sounds of their contemporaries in the industrial scene. My issue with Relapse lies in the fact that it just feels like the same song being repeated over and over again. Every song seems to follow exactly the same tuning, structure, and formula, including the skits. Even songs like “Weekend Warrior” play into some pretty awful tropes, like listing out a schedule of what you do during the days of the week. I had thought we pretty much shot that bullshit in the head after Stone Temple Pilots tried to pull that crap on Shangri-La and wound up basically writing a McDonald’s jingle.

If you’re a fan of Ministry and you wanted more Ministry, then Relapse is here, and yes, it is more Ministry. However, it meanders around without any sort of real cause, extreme just for the sake of being extreme. Regardless of whether you agree with the band’s political philosophy, there’s no denying that they are capable of making great music. But they didn’t on Relapse. They just made more music, and it’s about as middling as you can get.

EDITOR’S NOTE: Today, by chance, Ministry debuted their official music video for the song”Ghouldiggers”, and that’s below, followed by the first official video from Relapse, “99 Percenters”.

5 Responses to “MINISTRY: “RELAPSE” (and the new “GHOULDIGGERS” video)”