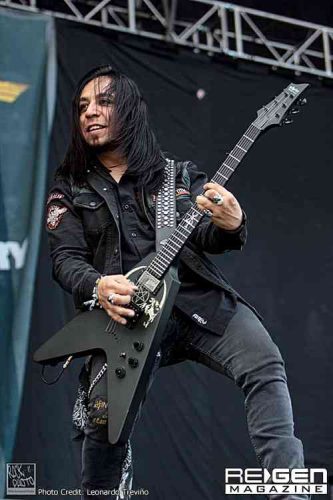 (Greek writer John Sleepwalker of Avopolis.gr brings us this interview of Ministry guitarist Sin Quirin in advance of Ministry’s first appearance on stage in Greece on June 1.)

First of all, I’m glad I get the chance to speak with someone who was a part of the latest Ministry line-up, before the band split up in the late ’00s. I was fortunate enough to see you at Hellfest during the tour you did for The Last Sucker and what I’d want is to compare your live setting at that time with Ministry’s present stage show.

When I saw you, you were playing behind bars, as if you were inside of a cage. Do you present the same visual on your current tour?

No, no more fences! Thank god for our faces! Even though this fancy scenery looked cool, it often ended up falling on our faces. So, no fences this time around. END_OF_DOCUMENT_TOKEN_TO_BE_REPLACED

Here we are, the day after Halloween, and I am amazingly clear-headed. Clear-headed enough to compile another look backward into the metal of yesteryear. Today the focus is on Ministry, mainly because earlier this week two of my Facebook friends happened to post on their walls, within an hour of each other, the first video you’ll find below plus one other. They reminded me of how much I used to like this band.

The first video is worth a bit of commentary. It originally appeared on a VHS video called In Case You Didn’t Feel Like Showing Up, which documented Ministry’s 1989-1990 tour in support of their album The Mind is a Terrible Thing to Taste. For that tour, Ministry founder Al Jourgensen recruited a big live line-up that included two drummers (regular drummer William Rieflin plus Martin Atkins), Chris Connelly (keyboards and vocals), Nivek Ogre from Skinny Puppy (vocals and keyboards), Joe Kelly (vocals and backing vocals), and guitarists Mike Scaccia, Terry Roberts, and William Tucker — in addition to Jourgenson himself and Ministry bassist Paul Barker. END_OF_DOCUMENT_TOKEN_TO_BE_REPLACED

(As he explains in this review, BadWolf is not happy with the comeback album by Ministry.)

I reacted, somewhat seriously, to “Ghouldiggers,” the introductory track on Ministry’s would-be comeback album, Relapse. Partway through the song, Al Jorgenson breaks into a skit wherein he calls his manager, only to be handled by an aloof secretary—her accent lies somewhere between Sheffield and Valley Girl, her actress did not deserve whatever pay she received—and placed on hold. What is wrong with these people, Jorgenson asks, what is their major malfunction?

A Ministry song actually irked me, right there—with a skit, no less.

In my waking life I work as, among other things, a receptionist. The success of my job depends partially on how well I shield my employer from his or her own clients. I walk into a Ministry album and expect to hear about “thieves and liars.” Not petty annoyances such as myself. And yet I continued spinning “Ghouldiggers” and the tracks that follow it for a period of weeks, despite not actively liking them. What is my major malfunction?

Well, among other things, that I’m listening to a post-Filth Pig Ministry record wherein Jorgenson sings like Larry the Cable Guy. To any musicians reading this: do not write a comeback album called Relapse that relies, heavily, on an unnatural accent. It did not work for Ministry. It did not work for Eminem. It will not work for anyone. END_OF_DOCUMENT_TOKEN_TO_BE_REPLACED

(DGR is in some kind of keyboard-pounding fugue state, with his third review in three days . . . and more are coming. Today, the subject is Ministry’s latest release, which is out now on 13th Planet Records. And at the end, we’ve got the just-released official video for the song “Ghouldiggers”.)

If any of you read my Electronica Clusterfuck of 2012 post, where I took on three decidedly not metal albums, then you’ll probably remember that I mentioned having a fondness for the various aggrotech genres, including industrial metal. No name is more synonymous with industrial metal than Ministry. They’ve influenced hundreds of bands, and frontman Al Jourgensen has to be eating people’s souls in order to stay alive long enough to kick out more music, given what the man has been through.

You may also recall that I sort of reservedly mentioned that I would try to work on something about Ministry, and well, here it is: My thoughts composed (as best I could) on Relapse, Ministry’s comeback album, and a hot mess in the form of about an hour of industrial metal.

What a goddamn odd release. That’s not saying anything new when it comes to Ministry, considering that they pretty much pioneered the way on odd things. With Uncle Al being completely batshit insane, taking on anything from politics to drugs to politics to…drugs, Ministry have always been a band with a ton of character. They’ve probably rubbed more people the wrong way than I could even think to count by being so far left that they’ve pretty much shot off of the planet and wound up near Alpha Centauri by this point. The fact that Relapse continues this trajectory isn’t shocking, not one bit. What is shocking is how much of a time capsule this disc really is. END_OF_DOCUMENT_TOKEN_TO_BE_REPLACED