Here we are, the day after Halloween, and I am amazingly clear-headed. Clear-headed enough to compile another look backward into the metal of yesteryear. Today the focus is on Ministry, mainly because earlier this week two of my Facebook friends happened to post on their walls, within an hour of each other, the first video you’ll find below plus one other. They reminded me of how much I used to like this band.

The first video is worth a bit of commentary. It originally appeared on a VHS video called In Case You Didn’t Feel Like Showing Up, which documented Ministry’s 1989-1990 tour in support of their album The Mind is a Terrible Thing to Taste. For that tour, Ministry founder Al Jourgensen recruited a big live line-up that included two drummers (regular drummer William Rieflin plus Martin Atkins), Chris Connelly (keyboards and vocals), Nivek Ogre from Skinny Puppy (vocals and keyboards), Joe Kelly (vocals and backing vocals), and guitarists Mike Scaccia, Terry Roberts, and William Tucker — in addition to Jourgenson himself and Ministry bassist Paul Barker. 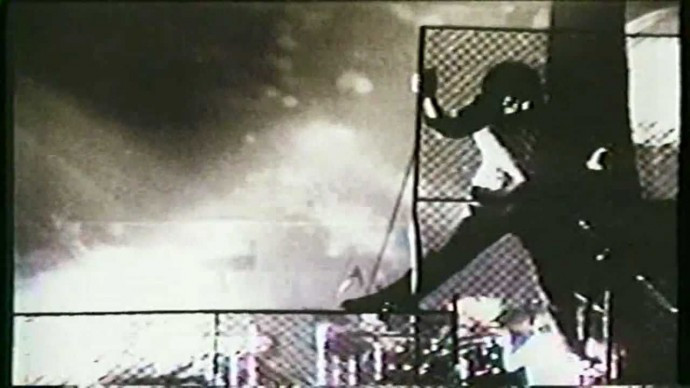 On the link for this video that was posted on FB, I saw a comment from someone who said he was at the show where this particular song performance was filmed, at a venue called Star Plaza that usually catered to country bands and other acts not remotely similar to what Ministry were up to. As you can tell from the video, chaos ensued. The song is “Thieves”.

I’m also including another live clip from that VHS, a performance of the song “So What”, plus a lesser known track called “Smothered Hope”, which is a remastered studio audio recording of a song that was included as a B side to the “Burning Inside” single released in 1989.

And then of course I have to include Ministry’s 1984 single “(Every Day Is) Halloween”, even though it’s before they got metal.

12 Responses to “THE REARVIEW MIRROR (MINISTRY)”