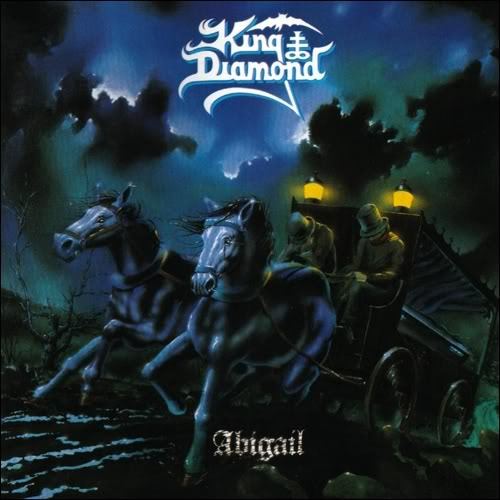 How do I know this is the 25th anniversary of King Diamond’s Abigail album? Because our brother in blog Full Metal Attorney has devoted a post to the anniversary on his site today (here). I would add that today is also the first birthday of his twin children, who someday will realize that their old man is way cooler than the daddies of most of their friends.

FMA’s post about this album makes me feel even more ignorant than I normally feel, which is saying something since NormallyIgnorant is one of my middle names. I feel more than normally ignorant because, despite the fact that FMA calls Abigail “one of the most beloved metal albums of all time”, I’ve never heard it. In fact, I’ve never heard any King Diamond album, though I’ve heard scattered songs here and there. Maybe I listened to the wrong scattered songs, because they never sent me into a rush to discover more of the band’s music, and that’s been true despite the iconic status of Mercyful Fate.

According to FMA, Abigail “has some of the best songwriting and performances of any metal record, ever, by everyone involved. And a creepy horror story to go along with it.” With praise like that, I felt compelled to check out two of the songs from Abigail to which FMA devoted particular praise — “The 7th Day of July 1777” and the title track.

I must say, the acoustic + synth intro to “1777” was very cool, as was the riffing that followed it . . . and then I remembered why I never dived deeper into the music: THAT VOICE!!

Egad, that falsetto eruption came damned close to making me rip the headphones off and fling them against the floor. With all due respect for FMA, notwithstanding the nice solo and the catchy riffing, I just can’t get past those vocals. I mean, I don’t enjoy the sound of a small girl crying/whining under any circumstances, but ESPECIALLY not in a metal song.

Nevertheless, I gritted my teeth and listed (I meant listened) to “Abigail”. More nice riffing/soloing . . . and more comical falsetto vocals that made me grit my teeth in agony, which were not made better by the accompaniment of cackling laughter and the strangled grunting. I’m also not loving the keyboard bombast near the song’s end.

Okay, I’ve made my confession. Am I committing unpardonable heresy or do I have good taste?  Comments, if you please.