I’m writing this on Friday afternoon. I don’t know for sure what I’ll feel like on Saturday morning when this post goes up on the site, but the odds are I’ll have an eye-watering hangover and my blood will be moving through the veins at the speed of sludge. I figure I’ll need something to get the blood pumping, something that will make me feel happy to be alive instead of contemplating the least painful way of killing myself. And as a trained medical professional, I have just the prescription for myself, and for any other Friday-night miscreants in the audience: Deathtrack. Or deathtrack, as the band seem to prefer.

deathtrack are from Norway. I discovered their existence two days ago via a report on the Facebook page of Svölk, with whom deathtrack share a band member (Halstein), that deathtrack were releasing a new EP with a free song download as enticement. So, impulsive creature that I am, I listened to that song (“Demon Cowboy”) plus one other that I found from the new EP (“True Blood”) — and I was SOLD. So sold, in fact, that I went and bought the band’s self-titled debut album on iTunes, in part because it includes a song called “Friday Night’s (All Right For Fighting)”, which seemed like good timing.

This music comes with a CLEAN SINGING! warning, but I’ll tell you what, Harry Hellriffer can sing, with a good, strong, clear voice, which he degrades with a little abrasion at the right moments. I’ll tell you another thing: These fuckers can lay down some heavy riffs and rhythms that make it impossible to sit still. 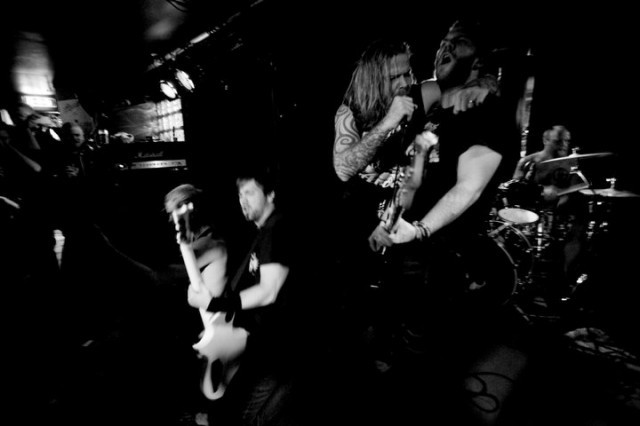 But deathtrack is also like a one-band variety show. “Demon Cowboy” is part stoner doom, part metal blues, part whiskey-soaked Southern stomp, and 100% ass-kicking infectiousness. “True Blood” is like an full-throttle Motörhead chopper on an open highway spitting flames from the exhaust. “Friday Night’s (All Right For Fighting)” body slams you with a punk-infused jolt of old school NWBHM (the spirit of “Killed By Death” is alive and well).

And there’s a lot more variety on deathtrack’s debut album, including the fat, sludgy pile-driver of “The Blood That Moves You” and the raucous chugfest of “King Without A Crown”.

As suggested above, there’s a lot of Motörhead worship on this album, and for a somewhat more recent reference, the music also reminds me of  Peter Tägtgren’s Pain as well as what I’ve heard from Alabama Thunderpussy (a band that deathtrack themselves claim as an influence). On this sunny Seattle Friday afternoon, it is hitting me dead center in the sweet spot.

So here we go — the two tracks from the new EP that have surfaced to date and then that “Friday Night” song from the band’s album debut. Time to wake the fuck up.

“Friday Night’s (All Right For Fighting)”

I haven’t yet found out when the new EP will be ready for delivery into the hands of fans or exactly how it will be distributed (except the band apparently plan to spread it through iTunes at a minimum). To keep track of what happens, go like the deathtrack Facebook page here.