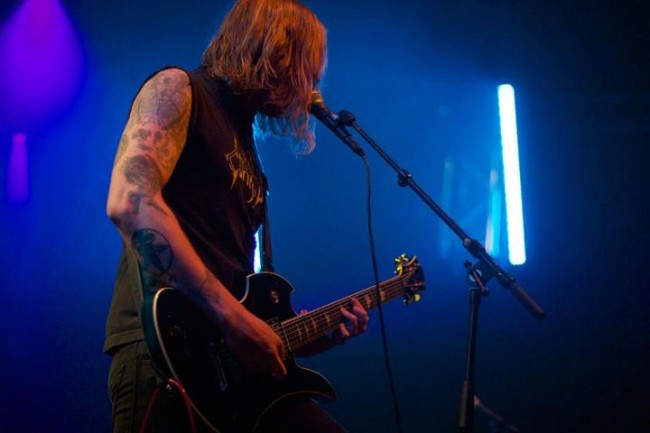 (BadWolf found us a real gem to start this Wednesday.)

If you still haven’t checked out Nachtmystium, Chicago’s black metal prodigies, where the hell have you been? Their mix of punky black metal with stoner rock, psychedelia, and industrial elements strikes that perfect balance between great songs and great sounds—their two Black Meddle records garnered serious critical acclaim (from myself and others) for it. But Nachtmysitum’s metamorphosis from Norwegian attack clone into unique entity began on their 2006 album, Instinct: Decay.

If you haven’t heard Instinct: Decay, this is the perfect opportunity. It’s required listening for any serious fan of USBM. If you’re a fan of Blake Judd and Friends’ new material, you can hear the beginning of that sound here. If you thought the Black Meddle albums were wussy metal you should still listen: Instinct: Decay is substantially rawer than either of its successors. Nachtmystium played the album front-to-back at this year’s Roadburn Festival, and some German website I have never heard of is streaming the entire performance as recorded straight from the sound board.

I imagine you can figure it out easily enough—hit the big triangle that looks like a play symbol. It’s a play symbol. [Editor’s intrusion: or, you can stream it at NCS right after the jump.]

The sound of this recording is pretty great, but that’s to be expected—I have Nachtmstium’s Live at Roadburn LP from early last year, and it’s fantastic. As a matter of fact, Blake’s vocals aside, this recording sounds better than the actual album, which is in pretty dire need of a remaster, already.

Nachtmystium, for those who don’t know, will have a new album, Silencing Machine, out this summer. Based on the songs that have already premiered, SM will sound more like Instinct: Decay than either Black Meddle record, so consider this live gem your official psyche-up for Chicago’s most wicked’s next slab of depravity.

One Response to “STREAM NACHMYSTIUM’S “INSTINCT: DECAY” – LIVE FROM ROADBURN 2012”