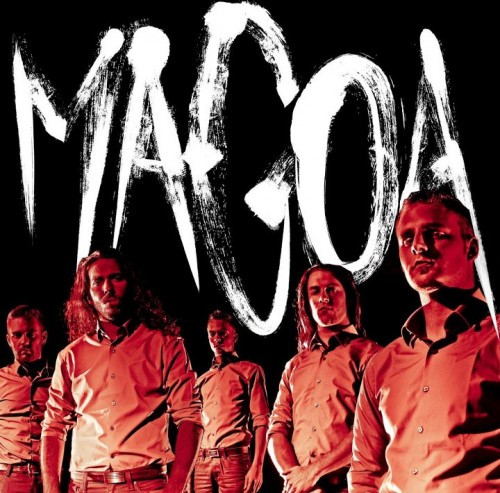 To start this Monday off in style, we have two videos, one new and one that has become new again because it won a prize. And starting off a Monday in fine style is always a good goal, because I ain’t feelin’ too fuckin’ stylin’ on a Monday, and any kind of Monday style is a big goddamn plus, don’t you think?

This French band’s last song and video jumped me up like an electrode in the bunghole. Not that I would know what that feels like, mind you, but it seems like a fitting metaphor. Magoa’s “Animal” video is one of the best of the year, and if you haven’t seen it yet, by all means please go visit our earlier post about it. But as of yesterday, Magoa have a new song + video that is a bunghole insertion with extra voltage.

If there’s another modern band doing old-school groove metal with as much punch as Magoa, then I really want to hear about it. Their new song, “Enemy”, is like a brigade of machinists punching rivets through the steel girders of your thick skull. It really is the archetypal convulsive headbanger, a cleverly calculated formula for making people go into paroxysms of spastic neck-snapping.

And if that weren’t enough, it includes a hooky chorus and an old-school breakdown — by which I mean a breakdown that isn’t announced by a big fucking bass drop and one or two atonal chords. The production is just about perfect for this kind of metal — powerful, cathartic, and man, when the double bass comes alive, you’ll want to ram your head into the nearest wall. Even better, the song is a free download.

The video isn’t quite as eye-popping as the one for “Animal”, but lightening really doesn’t strike twice in the same place. However, though the first video really spoiled me, the new one is still a kick to watch. Professionally filmed and effectively edited, it’s a performance video that meshes quite well with the music, enhancing the high-energy, heavy-grooved combustion of the song (and, like the first video, this one was again directed by the talented Benjamin Cappelletti).

“Enemy” will make groove-metal mavens piss themselves with joy. Prepare for pissing:

Where to start? Let’s start with Kvelertak’s 2010 self-titled album. It included a song called “Blodtørst”. Last September, the band released an animated video for the song, which was created by a filmmaker named Torjus Førre Erfjord, when he was then a college student. Somehow I missed this video when it came out, but I remedied that gross oversight after I saw over the weekend that it had won the 2012 Short Film Award from the Norwegian public broadcasting site, Filmpoliteit (“Film Police”).

I’m not even going to try to describe the video, except to say that it brings to life Kvelertak’s Nordic black ‘n’ punk raucousness in a perfect way, with Vikings, and blood, and wormy things with teeth, and the mythical dragon Nidhogg. I would easily say that it’s the best metal video of 2012, except it appeared in 2011. I have no idea why I missed this earlier, and no excuse.