(This is the second of our three reviews of L’Enfant Sauvage. Here, the author is Andy Synn.)

Certain albums you just know are going to be difficult, even controversial, to review. The new Gojira is one such album. Expectations are high no matter who you are, whether you already decided this album is the metal equivalent of the second coming, or if you’re a dyed-in-the-wool cynic who knows for a fact that the band’s signing to Roadrunner Records obviously signals a decline in their creativity and integrity.

So what do I think?

It’s good, very good, but not mind-blowing. Stunningly, almost cripplingly heavy, it displays a central struggle between familiarity and progression. BUT (and trust me, it’s a big but) this struggle itself  is extremely enlightening and has, perhaps more than any other of their albums, forced me to think deeply about the band, their motivations and their methods. While the pulse of the music still hits on a purely visceral level, it has a consciousness which captivates the imagination and should lead even the casual listener to think more carefully about the band’s place in the world. 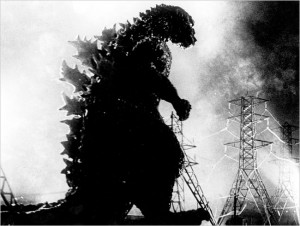 “Explosia” starts things off with its continent-sized riffs and volcanic drumming eruptions. It does, however, come with a nagging sense of familiarity, as many of the stereotypical Gojira “tricks” are present and accounted for. It’s a strong song, with its central harmonic hook and pummelling tom work, it just feels more familiar than challenging. The second half, however, takes a different turn, suggesting that this familiarity was a conscious decision to ease people into the record. Though it remains at heart vintage Gojira, the elements are re-arranged in a way that recalls the blooming energy of Burst, blossoming into a seething mass of reverberant melody that overshadows the more violent, yet  more predictable, first half.

The title track epitomises the theme of the record’s first half, striking a balance between the mechanistic precision of …Flesh and the organic heaviness of From Mars…. It’s one of the rare songs that betrays the band’s strong Meshuggah influence overtly, taking an almost perverse pleasure in forcing the listener to confront this comparison. Though it continues to re-use elements of the core Gojira sound, it succeeds in doing so in a more energetic and vibrant fashion than the opener. The furious chaos in the song’s mid-section, and the monstrous marching riff that leads to the song’s close are both familiar yet undeniably crushing.

“The Axe” displays another of the key Gojira talents, the use of undercurrents of melody to tie a song together at its roots. It’s not the most inspiring of tracks, but neither is it a complete turn-off, with a beguiling use of melody to soften and redirect its harshness. Steady, almost stately in its progress, it builds heaviness through depth of mood more than metallic pummelling.

“Liquid Fire” is the album’s first real monster, powerful yet restrained, and largely bucks the trend of over-familiarity that has coloured the edges of the album. Bulldozingly heavy, it has a real sense of mood and atmosphere, along with the strongest vocal hooks thus far. Oddly ethereal, but with a solid sense of power, the track matches suppressed melody with a rippling heaviness in a manner more akin to Cult of Luna’s muscular melancholy. The subtle use of vocoder-ed vocals for a call-and-response effect is a clever trick, while the closing bars see the band cultivate a more  epic vibe, topped off with a grand melodic flourish. 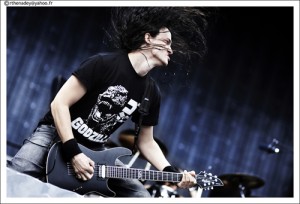 Melodious instrumental “The Wild Healer” is pleasant enough, but doesn’t really go anywhere. While it has a nice central melody, it sounds oddly like the band were writing a track and simply abandoned it after the intro. Although it can be argued it serves as a segue into “Planned Obsolescence”, there remains a nagging sense of “unfinished business” about the whole affair.

From this point I can’t help consider the obvious familiarities of the album’s first half as a “farewell note” of sorts, to the more predictable elements of their sound. Although on several re-listens, minute alterations to the formula seep through the cracks, these are only tiny hints compared with the tectonic shift in sound that follows.

“Planned Obsolescence” will certainly serve as a real eye-opener for the jaded fan who thinks they have the band’s formula down pat. As death metal as a very death metal thing, it possesses a blasting ferocity the band have rarely displayed, and ranks among the most extreme compositions they have ever put together. It’s a clever choice to inaugurate the second half of the record, as its obliterating heaviness (while different in itself) also serves to ground the song’s more expansive direction in a more visceral, primal manner. Drifting through the firestorm, glacial post-metal influences rear their heads, leading to an anti-climactic finish whose clever misdirection cements the track as representative of Gojira’s insistence on growth and progression.

‎”Mouth of Kala” kicks in with a shotgun-blast kick-snare attack, and hammers at the listener with carefully cultivated power. This serves to mislead the listener into thinking this is going to be a straight up headbanger, despite the guitars having a more atmospheric heaviness than a concrete attack. Soon though, it  drops into a winding, almost psychedelic verse-riff, which twists and turns unpredictably. Though the intro riff pops back up as a sort of semi-chorus, this song largely disregards the conventions of linear song-writing. The central digression into airy atmospherics once more puts the record on a different footing, while the pulsating heartbeat of the outro is overlain with a ringing, insistent melody line.

Okay, perhaps the term “tectonic shift in sound” was a little overblown, as obviously the band haven’t discarded their identity, as their always recognisable guitar tone, rough-hewn vocal cadences, and enviable drumming avalanche remain present and correct. However, they do seem to have begun laying the groundwork for a new foundation on which to build their future. Conscious as they must be that such a distinctive style as theirs can be both a gift and a curse when it becomes so firmly established, they have chosen to move sideways with their sound, rather than forwards, opening up whole new vistas of opportunity. 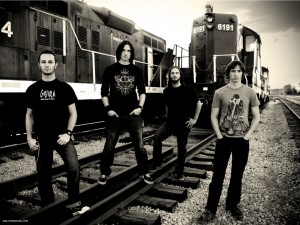 For example, although “The Gift of Guilt” continues to incorporate the stereotypical Gojira elements we know, over the course of the song their presence steadily decreases, making room for a more open and varied sound. While the intro is VERY similar to material from …Flesh, this is merely a starting point to work from, as the track coalesces into a series of dive-bombing riffs and strafing drum patterns that are simply mind-boggling. In isolation, some elements may seem over-used or over-familiar, but the band toy with the complexities of balancing their old and new approaches to create a song that at times sounds like reality itself is collapsing, while at others hints at moments of breathtakingly melodic nuance.

The calm opening of “Pain Is A Master” is misleading, as the song utterly pulverises. The laser-guided main riff cuts and cauterizes, while the vocals are amongst the nastiest ever drawn from Joe Duplantier’s blast-furnace throat. Scattershot snare-blasts and weird, whirling fills hit their mark perfectly, while the song takes a big risk part-way through, changing quite drastically into something more Isis-esque, but successfully navigates this transition so as not to feel disjointed.

“Born In Winter” builds slowly, but when it detonates it is devastating. The ringing bass and guitar interplay and steady heartbeat of the song create an ocean of light over which semi-sung vocals deliver a stream of lyrical consciousness. Short but perfectly focussed, it portrays a tapestry of emotion, rising like the tide to a stunning climax, before ebbing away into nothing.

The band arguably saved the best for last, as the massive dynamic of “The Fall” is a stunning display of organic power and cold, esoteric horror. Dark and ominous, it has a nihilistic bent that Gojira have only ever hinted at before. Sludgy and primordial, it crawls along, transforming and evolving as it goes. Familiar Gojira elements are plucked up and then discarded, serving only to accentuate the creeping, apocalyptic path of the song. Cybernetic vocals deliver a melody stripped of all humanity while the track slides over the edge into chugging, viscous bass-work and agonised, tremolo’d, guitars lines, in a slow spiral of oblivion.

If From Mars… was the organic heart, and …Flesh was the technical mind, this one is the moody soul of Gojira Just as devastating, containing some of the most purely death metal and groaningly sludgy material the band have ever created,  it at times accumulates a choking heaviness of slow, creeping horror quite at times unlike the Gojira we know. Though it does occasionally struggle to overcome the limitations imposed by the “established sound” of the band, there are no really weak moments here, some songs are simply stronger and fresher than others.

The format of the album, with the more stereotypically Gojira-esque material at the front, and the more varied, unusual material at the back, gives credence to the idea that Gojira are surreptitiously signposting the overall direction they intend on to travel, presented  here in microcosm. The second half of the record sees the band moving even further from their early Meshuggah-derived sound, adopting an approach I have chosen to term Scandinavian-influenced bio-organic-cyber-doom. 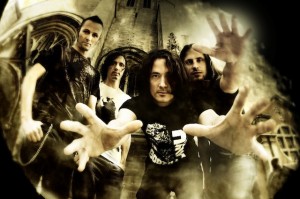 Though this album is not yet a total change in sound, it definitely signals a paradigm shift in the way Gojira are thinking about their identity. I could argue that their last two records saw them reach the absolute pinnacle of what could be achieved with the tools and mindset at their disposal, and only a fool would begrudge them the chance to try a different approach with their future endeavours.

I’m sure many will disagree with me, but for me this is very much a transitional album that will, I believe, ultimately find its place in the context of Gojira’s body of work over time. It’s the close of one chapter and the start of another, artfully written and cleverly placed to lead the band from one era into a new, and possibly even brighter, future.

Do not read this critical appraisal of the record as a “criticism” of it. Rather, I feel like this album has a distinct purpose beyond, and perhaps more important than, the songs themselves, as a stepping stone designed to set the band on a path towards their future. As such, it comes across most strongly as a portrait of a band still evolving, albeit one in possession of a brace of anvil-heavy songs to help them along the highway.

(L’Enfant Sauvage was released yesterday by Roadrunner Records, and you can still hear the full-album stream via this link.)

10 Responses to “GOJIRA: “L’ENFANT SAUVAGE” (A Review By Andy Synn)”