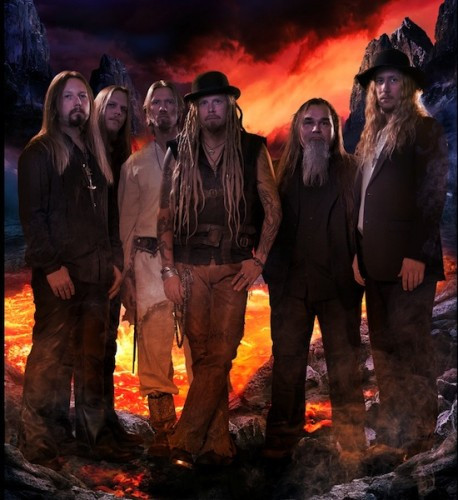 Are you like me? Have you ever changed your opinion about a band’s music for the better after seeing them perform live? That’s what I did after seeing Finland’s Korpiklaani on stage. There was a time when I had only a middling regard for their recorded music, and then I saw them in Seattle last year in a tour they headlined with support from Arkona, among others. I became a complete Korpiklaani convert after seeing that show.

Their set was just a complete blast — I could have continued listening to them and watching them ’til dawn. Now that I’ve been infected by their infectious exuberance, I get a big stupid grin on my face just about every time I listen to them, in part because it makes me remember how good they made me feel on that night in Seattle at Studio Seven.

I got one of those stupid grins this morning after watching the band’s new video for “Rauta” (Steel), which will appear on their next album, Manala. Manala will be released via Nuclear Blast on August 3 in Europe and August 14 in North America. Korpiklaani sing their music in Finnish, but the European limited digipak edition of Manala will come with a bonus CD that will include all the songs with the lyrics sung in English.

Anyway, there are actually two versions of the “Rauta” video — one with the song sung in Finnish and one with the English lyrics. It’s a foot-stomping good time in either language, though I prefer the Finnish. These videos follow pretty closely on the heels of two lyric videos (in Finnish and English again) for another song from Manala called “Kunnia” (Honor). It’s a good time, too. I think you would really have to be in an especially sour mood not to tap your foot and smile over these songs.

I’m also delighted to report that Korpiklaani will be touring North America again this fall, with an amazing line-up of support bands: MOONSORROW, TÝR, and METSATÖLL. So, get your hurdy-gurdy on and check out the new videos (in both languages) after the jump, along with the tour schedule. 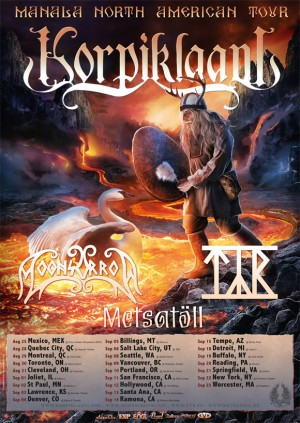