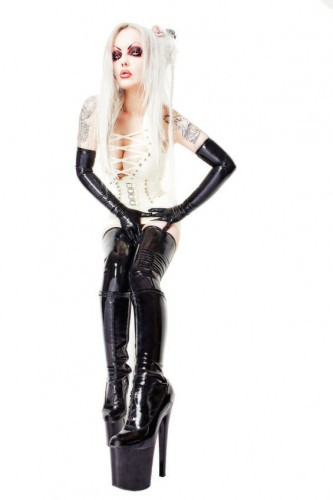 To be clear, I like the idea in concept. Unlike some people I know, I’m all for opening up the music to new listeners. I’m not really worried that this will destroy the underground or ruin the fuck-you ethic of most bands, because I’m secure in the knowledge that no matter how much mainstream publicity extreme metal receives, the audience size is really never going to explode. The music just clashes too hard with the sensibilities of most music lovers. But there will be some converts, and that’s a good thing in my book.

Apart from welcoming the attention, I’m entertained for two other reasons: First, I enjoy seeing good writers grapple with the challenge of trying to describe the music in terms that people who have little if any previous exposure to it will comprehend, without causing them to immediately run for the hills — and I’m not talking about writers who have no real interest in educating their readers and instead just want to titillate them with some shock value.

Second, it’s fun thinking about the controversy that such educational pieces would generate if they were read by the kind of knowledgable, died-in-the-wool metalheads who are patrons of sites like this one. We all know that most metalheads are a quarrelsome, picky bunch who enjoy finding fault, even with each other, when it comes to things like genre classifications, the quality rating of a band’s music, and descriptions of albums.

I’m thinking about these topics because of an article by Jason Roche that appeared yesterday in the online version of LA Weekly under the headline, “Everything You Always Wanted To Know About Metal But Were Afraid To Ask”. And yes, that photo of Elena Vladi from some band named Demona Mortiss (photo credit: W.B. Fontenot) is what illustrated Jason’s article. 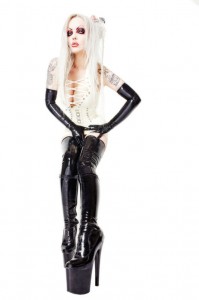 Now that photo is not exactly what I would have used to illustrate an article that’s (mostly) about extreme metal, but I can understand the rationale: Never underestimate the power of cleavage and a pretty face (not to mention shiny leather) to suck readers into a story. It would have been more authentic to use a pic of someone like Corpsegrinder or Nergal or Andy Synn, but Jason probably would have lost half his audience right off the bat.

Still, is it really doing our scene any favors to use someone who looks like she’d be more comfortable on stage with Lady Gaga as the face of metal?

I guess the same rationale applies to the headline. It’s an exaggeration, sure, but if the goal is to educate readers about something they probably know little about, you want to catch their interest.

And broadening horizons is indeed part of Jason’s job. Over the last year, he’s been amping up LA Weekly’s coverage of metal, and we’ve written about some of his other features at NCS (e.g., this one). It appears that he’s received requests from curious readers and internal staff to go into more detail about some of the terminology he’s been using in his articles. So, in this latest piece he sets out to define many of the genres and sub-genres of metal, and to give examples of notable bands within each classification.

I thought, overall, he did a good and faithful  job (not that anyone is asking my opinion), recognizing that he limited himself to only a sentence or two for each genre definition. But . . . and here’s where the metalhead nit-picking comes in . . . he wrote items such as this:

He includes this line in the description of black metal: “Elements of thrash and death metal lurk beneath, but the pace is even more manic and the production lends an ethereal air.” Undoubtedly true of some BM bands, but not exactly the description I’d use for most black metal, especially when the examples given are Mayhem, Immortal, and Burzum.

Of grindcore, he writes: “The guitar work often has a danceable groove”. Man, I think some of Jason’s readers are in for a big surprise, unless frenzied moshing counts as dance.

As an example of “djent”, he lists Meshuggah, which made me start to weep uncontrollably.

I don’t know if critiques like this really matter, when many of Jason’s readers probably don’t have the first clue about the music or the bands. What do you think?

And let me be clear: I think Jason is a good writer and he knows a thing or two about metal, and I applaud his efforts at LA Weekly to bring metal to the masses. Plus, I think he mostly got things right in this article — though I’m sure not holding myself out as an authority. If you think I’m an authority about anything, then you need to get out more.

So when I poke at some of Jason’s descriptions and examples, I’m kind of doing what he did with that pic of Elena Vladi: I’m trying to interest you in reading Jason’s piece, in the hope that you’ll do that and then come back here and leave some Comments, which I’m sure will be entertaining, because I’m all about entertaining myself.

What do you think of what Jason wrote? And more generally, do you think articles like this are good or bad for our scene?

Ready, set, GO! (THIS IS THE LINK to Jason’s article.)

52 Responses to “BRINGING METAL TO THE MASSES: THE PRO’S AND CON’S”