(In this post, BadWolf looks back at an album he calls the progenitor of progressive death metal — a 1990 release by Florida’s Nocturnus, a band whose members including some significant names in the annals of extreme metal.)

Progressive death metal, now far from its maligned beginnings, is in full bloom. Certainly, the genre is a blog-darling, and NCS is no exception to that trend. Many of the most successful and critically acclaimed bands in contemporary metal—Opeth, The Faceless, Between the Buried and Me, Periphery, Obscura, Meshuggah, and others—could all very loosely fall under progressive death metal flag, or at the very least would not exist without that genre’s long and sordid history. Which means now is as good a time as any to reflect upon the art form’s history.

Where is it going? Well, where has it come from.

Well, I have dug into the past and given some extensive listening to, according to my research, the progenitor of progressive death metal. Some of my co-writers at Invisible Oranges turned me on to Nocturnus during my stay at Maryland Deathfest 2012, and it’s been in heavy rotation on my iPod since. Nocturnus released their debut album, The Key, in 1990 on Earache records, but it still scorches.


This is a record, now, for people dwelling in the past, quite literally. Obligatorily, I will outline The Key‘s time-traveling concept, the sort of thing only possible in a time when people remembered Queensryche as a major success. To whit, The Key: the story of Satan rising to earth (“Lake of Fire”) in a post-apocalyptic future (“Neolithic”) where he commandeers a time-travel device called The Key, returns in time to the year 0 BC (“BC/AD”), murders the baby Jesus (“Destroying the Manger”) so he can rule the future with an iron fist (“Empire of the Sands”). Ridiculous? Totally. Awesome? Indeed. Much like Operation:Mindcrime, The Key screams for some idiot to butcher it into a terrible summer blockbuster.

Everything else here screams early-90’s classic, especially  the super-detailed Dan Seagrave cover, depicting The Key‘s antihero protagonist and, presumably, the titular key itself—I fancy his cyber-Satan better even than any of the monstrosities he designed for Suffocation’s early-90’s output.

The pedigree behind this record makes its relative obscurity, frankly, unacceptable: lead guitarist Mike Davis went on to play with Richard Christy (Charred Walls of the Damned, Death), while drummer/vocalist Mike Browning played in Morbid Angel before Pete Sandoval, and Kam Lee, the original vocalist from Death, performs backup vocals here. Nocturnus were, briefly, poised to be bona-fide heroes: the song “BC/AD” appears on the second pressing of the infamous Grindcrusher compilation (arguably the genesis of death metal as a public concept, more so than Possessed’s Seven Churches album). Likewise, Nocturnus opened the Grindcrusher tour (under Napalm Death, Morbid Angel, and Godflesh).

But does The Key still both grind and crush? Keyboardist Louis Panzer frames their songs with cheesy atmospheric effects and melodies, revolutionary at the time. The remainder of the songs focus on equal parts gratuitous shred and memorable vocal accents. Nocturnus’s take on the keyboard-and-chorus approach sounds rudimentary now, thanks in no small part to Browning’s less technical drumming style, but the space he leaves behind lets those traded solos shine.

The Key winds up sounding grandiose almost in spite of itself. Literally, it sounds like two people shred-soloing over another, less technical, band—but that’s almost the point. This is a huge, goofy record, completely matching the absurd concept—perhaps that’s why Nocturnus doesn’t get the insane name recognition that their first generation Earache brothers do.
http://www.youtube.com/watch?v=E2AtXvYlf_g
But there is no reason to discount a record based on its lack of tooth-grinding seriousness. This is Metal we are talking about. The Key would be an abject failure if it weeren’t full of great songs, and luckily for us, it is. Opener “Lake of Fire” is genuinely upsetting at times in the way only Immolation muster these days. “Neolithic” actually strings its various sections together with a main synthesizer riff. My personal highlights are the vocal hooks, such as the “enter the droids!” vocal hit on “Droid Sector.” And I swear I’ve nearly crashed my car multiple times yelling along with “Destroying the Manger” during its off-kilter, twice-yelled chorus: “DIE! BY! THE! SIGN! Of [beat] Tha-KEYYYYY!”

The Nocturnus take on prog—no long songs, no jazz, less-than-tech drumming, low-fi production—was dwarfed even in its time by previous prog metal albums by Psychotic Waltz, Voivod, Coroner, and Celtic Frost. Just a few years later Cynic, Atheist, and Pestilence would out-weird it by leaps and bounds. But The Key has an accessibility that, say, Necrophagist lacks—while still sounding nasty and aggressive. Even Paul Masvidal has been stripping his compositions down; if the future does repeat the past, the future of progressive death metal may be streamlining, not expansion. Only time will tell. At present, to you lovers of modern prog death, behold Australopithicus, the yeti, Nocturnus. 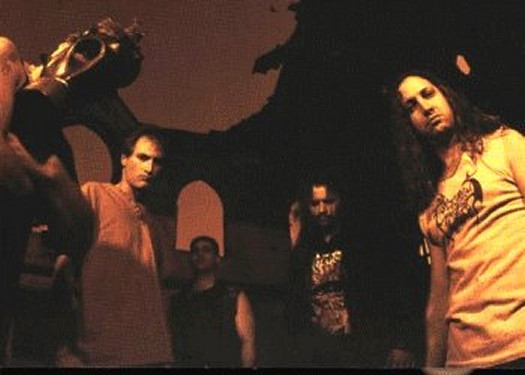 2 Responses to “EFFIGIES OF THE FORGOTTEN: NOCTURNUS – THE KEY”