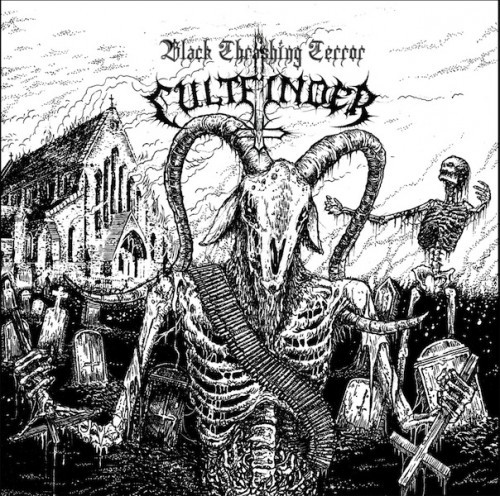 The three songs on Cultfinder’s new EP fly by, but not like an exaltation of larks or even a murder of crows on the wing. Black Thrashing Terror flies by like a squadron of screaming Luciferian attack jets on a strafing run, spitting high-caliber ammo straight at your pathetic flesh.

Just seeing a piece of Mark Riddick artwork on the front, you could lay good odds that what lies within will take no prisoners, and you’d be right. The title track gives you a good head-fake at the start, crunching along ponderously like a death-doom golem, but then — true to the track’s name — Cultfinder begin to rip hell with a high-tempo whirlwind of distorted, punk-influenced, thrashy chords; hammering crashing percussion; and screeching, clawing vocals. There’s a reprise of that sludgy intro and then a spitfire finish.

“Archangel Burial” has its own little groaning-chord intro, and then the band let fly again, this time throwing in a wall of tremolo mayhem to spice up the rapid-riff pummeling.

And to finish off this brief offering of the devil’s music, “Witching Curse” gives you another good horse-whipping with a studded flail, pausing only long enough with a couple of doomy breakdowns and a moaning guitar solo to let you cry a little before the lacerating resumes. 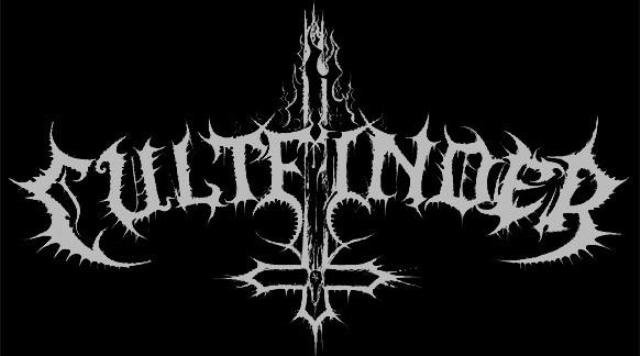 Black Thrashing Terror will give you some good release, some good neck sprain, a nice galvanic charge straight to the brainstem, an excellent time trip back to the early days of thrashing black metal. In about 11 minutes, it will be over, and if you’re like me, you’ll go right back to the beginning and bare yourself to the lash all over again.

Cultfinder’s three members appear to reside in Farnborough (UK). They’ve been together since 2010, with a previous 2011 demo to their name. Later this summer, Eldritch Lunar Miasma Records will be releasing Black Thrashing Terror on a limited run of 7″ vinyl (with accompanying logo patches for the first 111 shipments), and will be fielding pre-orders at this location soon. No word yet on whether the EP will be offered as a download.

You can find Cultfinder at these infernal places on the web:

Now, have a listen to the title track: