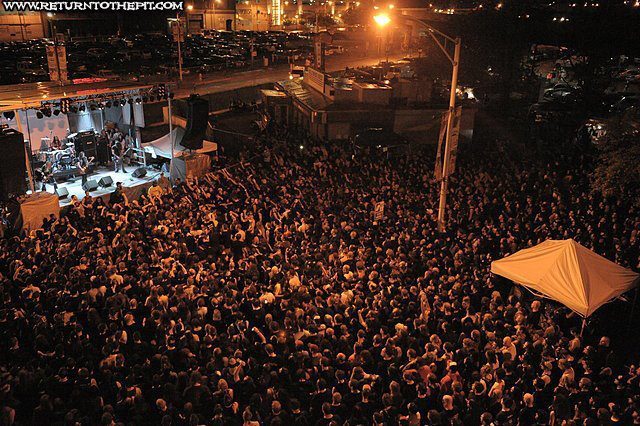 It’s waaaaaaay past the end of our normal posting day, but I thought this news was significant enough to interrupt my regularly scheduled evening activities, which consist of lolling on a comfy sofa like a beached orca watching The Food Channel, taking frantic phone calls from world leaders, solving quadratic equations in my head for shits and giggles, and occasionally making lascivious remarks to my wife on the off chance that she might be in a frisky mood.

Yes, just hours ago, the best metal festival in these United State announced the first 16 bands to appear at MDF XI, which will be held in Baltimore on May 23-26, 2013 — and here they are:

Can Venom still play?  And what will they play?

Will Carcass go early or late in their discography when they put together their setlist?

Cool to see those killer French bands, Antaeus and Aosoth . . .

Who are those three Czech bands??

Obviously, there are many more bands who will be added between now and next spring, and I’m sure we’ll periodically report the updates, despite the fact that the odds are again slim I’ll be able to make the 2,000-mile journey to see this thing.

I now return myself to my regularly scheduled programming.

32 Responses to “MDF XI: THE MARYLAND DEATHFEST ANNOUNCES THE FIRST 16 BANDS FOR 2013”