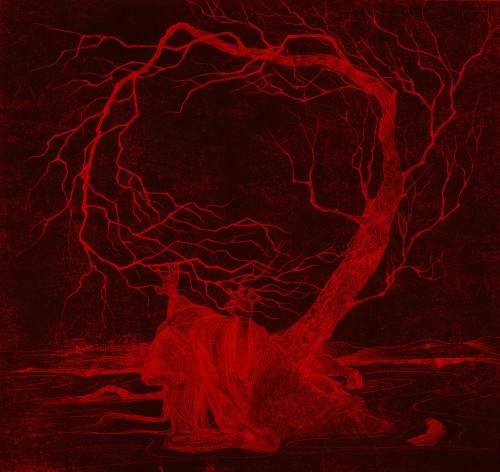 (In February 2011, we reviewed the 2010 debut EP of Dublin’s Wound Upon Wound. Today, NCS writer Andy Synn provides his assessment of the band’s debut full-length album, which was released earlier this month and is available for free download.)

Brothers and sisters, I am here today to talk about… DOOM!!!!

Blackened doom at least. Or, Doomy black metal. Genre terms are confusing. Either way this album is a monolithic treatise on desperation and despair, soundtracked by venomous tremolo melodies and crushing slabs of doom-laden guitars.

An admission though, first. Doom isn’t one of the genres I am particularly au fait with. Though there’s a crossover with some of the more melodic, melancholic stuff I find pleasure in imbibing (a pint of Daylight Dies always goes down smooth) I’m definitely something of a neophyte when it comes to the slow struggle, at least on record (though I have experienced the breaking weight of several devastating doom bands in the flesh).

But Wound Upon Wound are far from a simple Doom band. The name itself should tell you that. No, what we have here is a black metal band who are not only unafraid to ease up on the speed once in a while, but who actually revel in reining in their breakneck speed suddenly, reducing their momentum to a crushing, cataclysmic crawl, all the chaos and calamity crashing together in a massive pile-up of sickening, juddering riffage. 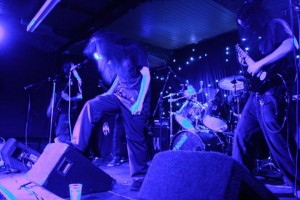 Opener “I Become” is an ugly, unforgiving number, refusing to budge from its ominous, claustrophobic pace. Choked, demonic vocals and cracked, splintered chords scrape away at the nerves while the drums beat out a hideous cadence, all the while the guitars grind away remorselessly, testing the listener’s resolve at every step of the way. Only during the second half of the song does this suffering finally bear fruit, a transformation beginning slowly, but building to a frenzy of blasting drums and broken, jagged guitars, culminating in an unexpectedly melodic and melancholic crescendo.

The damning malediction of “Descent” is a more proto-form black metal number, its icy skeleton overlain with a skin of pure malevolence. Anguished howls and brooding introspection take pride of place amongst the weaving tremolo melodies and whip-crack drums. The group’s roots in the soil of Gorgoroth are evident, but they have grown in a different direction, one less nihilistic yet far more haunted, its darkness directed inwards, rather than outwards. The track’s morbid ambience also has a touch of Wolves In The Throne Room to it, but with more venom and vitriol, an archetypal dissonance that moves the track past being a simple melding of its influences into something far more illuminating.

The lacerating guitar lines and charred  vocals of “Awakening” add a shot of poisonous aggression to the album’s oily brew of crystalline tremolo leads and suppurating, seeping chords. The hanging chords and twisted, dire melodies paint the track with a radiant, harmonic dissonance, simultaneously uplifting and forlorn, orchestrating an intensely emotional experience from start to finish.

Those enamoured of the new Abigail Williams album (and shame on you if you aren’t) will find much to love here.  The blackened majesty of their seething tremolo melodies makes the two records cousins, if not brothers, and although this album lacks the classical nuances and shadowy grandeur of Becoming, it makes up for it with a lethal dose of poisonous atmospherics and doomy self-loathing.

The stark, wind-swept aura of “Eulogy” is perfectly placed at the album’s mid-point, the ghostly ambience of this mostly instrumental track providing an eye of calm amidst the storm of sorrow, a ritual cleansing before the undulating rhythms and lightning flashes of melody in “As The Waves Draw Closer” combine to produce a powerful, tidal tantrum of heaving guitars and rumbling drums. Scything cymbals crash and harmony and dissonance clash with thunderous force, while the grim, guttural vocals lend the track a monstrous, menacing vibe. The harsh, keening melodies of the song’s cold, reflective mid-section sit in stark contrast to the taut, crashing chords and intricate drum-work which conduct and convey the horrified, emotional torment of the song toward its terrible conclusion.

The unsettling opening bars of “For This Is My Flesh” offer only the merest hint at what is to come, slowly unfolding into a grim dirge of suicidal, languishing chords and sludgy, dragging bass-lines. The howling vocals reek of spiritual sickness, while the cracked and distorted funeral march of the guitars channels pure Celtic Frost malevolence. The song’s restraint is one of its greatest strengths, allowing the guitars to build and build into a looming presence that bristles with dark intent. The final bars are permeated with a ghastly, esoteric horror, a scarred, sickening chord progression dragging the listener down to drown beneath waves of bleak, choking darkness. 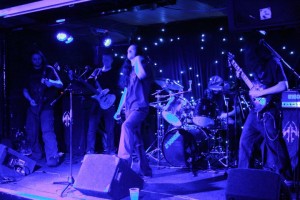 The finale of “Every Tongue Shall Confess” is a ten-minute test of endurance that moves from its opening bars of storm-drenched melody to an infernal conflagration of doomy, cavernous chords and groaning, asphyxiating vocals. Again, the similarities to Becoming allow for an impressive comparison, the ugly and unflinching brutality of expression laid out with uncharacteristic vulnerability amidst piercing flashes of searing melody. The bone-grinding march of crippling drums and beaten, bruising guitars drive the song relentlessly toward the edge of a lifeless abyss, with only sudden bolts of blinding black melody to light the way.

Just as the crushing density of the song threatens to collapse in upon itself, the band explode into hideous life, unleashing a feverish torrent of scathing drumming and skin-crawling tremolo guitars, in a wild, mad dash across a barren and desolate musical landscape.

The track climaxes in a wall of impenetrable, pitch-black chords whose vast gravity sucks in all around it, an inescapable singularity that swallows all light and hope, leaving the listener draped in darkness and despair.

The group have come far since their (admittedly excellent) debut EP, shedding the stain of their influences as they developed a new identity of their own, expanding on their hidden potential to produce an unexpected masterwork. This album is as much an experience to be endured as it is one to be explored, pulling the listeners down into the pit to confront their own darkness. Only when reduced to a state of utter emotional and physical exhaustion can the record’s true revelations be understood, and only through such suffering can we be transformed.

EDITOR’S NOTE: For more info about Wound Upon Wound, visit their Facebook page via this link. Wound Upon Wound have made their debut album available for free download both on their Bandcamp page — HERE.– and on SoundCloud. Here is a stream of the entire album: