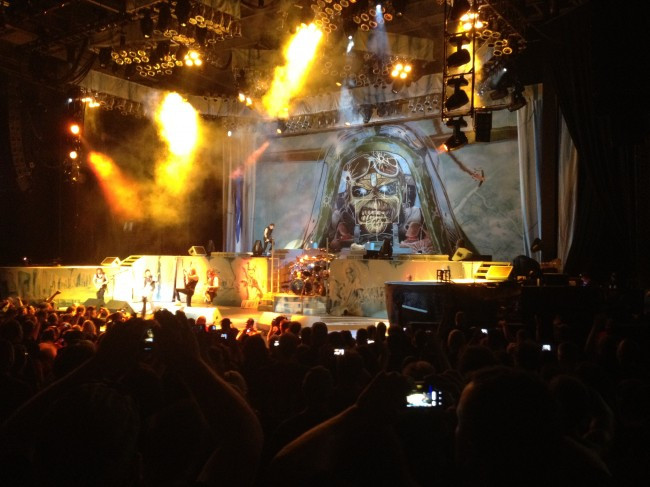 (BadWolf makes me very jealous sometimes. Case in point: He attended a concert by the legendary Iron Maiden in Detroit on July 18.  He provides this report.  Credit for the photos goes to Mahlon Orrin.)

There are limits to how excited someone can reasonably be for an event. I try and contain my excitement, these days. After all, excitement is kissing  cousins with anxiety, and the two frequently swap clothes when I’m not looking.

So when I say that I was unreasonably excited to leave work on July 18th and see Iron Maiden, I want you to have some idea of what I mean: enough caffeine, testosterone, and adrenaline running through my veins to rouse a narcopleptic doormouse.

It was to be my first Iron Maiden concert. Bruce Dickenson and co. remain some of the last classic metal gods that one can see in the United States—and reportedly the only ones who still put on a half-decent show, besides maybe Motörhead (not that I know, I’ve never seen Motörhead either). That Maiden, known for eschewing classics in favor of new material, were playing an all-retro set only frosted my cake.

My best friend, d00sh c00gr, and I felt so elated at the opportunity that we broke a personal vow and returned to Detroit Energy Theater, where we have witnessed many large summer metal shows (most of them involving Slayer) completely wrecked by a combination of bad sound and shitty fans. 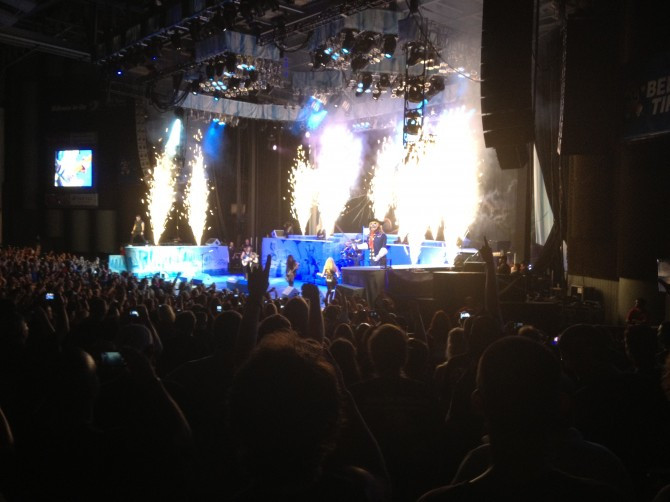 We arrived just a moment too late to see Alice Cooper open the show, due to unavoidable delays. I am told this is a crying shame—apparently Alice Cooper still puts on a fantastic live show. On this tour his band was augmented with Orianthi, the young hotshot guitarist who worked with Michael Jackson before his passing and achieved some mainstream success with her minor radio hit “According to You.” After watching footage from this year’s Bonnaroo of Orianthi shredding and Cooper still commanding a crowd, I’m sorry I missed them. Next time I have an opportunity to see the original shock rocker live, I won’t pass it up.

Maiden themselves ripped through a 90-plus minute set, with all the professionalism and spectacle of a Broadway theater troupe. Minus a little sloppiness at the breakneck intro to “Aces High,” Maiden pulled their songs off perfectly. Bruce Dickenson can still hit the high notes he built his career on while whipping the audience into a frenzy, and his backing band still sprint around like men one-third their age. I’ve seen my fair share of classic metal acts, and it’s never totally clear how much they care about their fans or even their own music. With Iron Maiden there is no question: they care.

Maiden’s set re-intepretated their classic 1988 Maiden England tour (above footage from that tour), focusing mainly on material from 1988’s Seventh Son of a Seventh Son album—the weakest of their classic work, in my opinion—with at least one song from every other pre-90’s Maiden record. While I adored hearing several personal favorites, especially “Phantom of the Opera,” the Seventh Son material did drag the set a bit. I would have especially liked to hear more from Somewhere In Time than just “Wasted Years.” 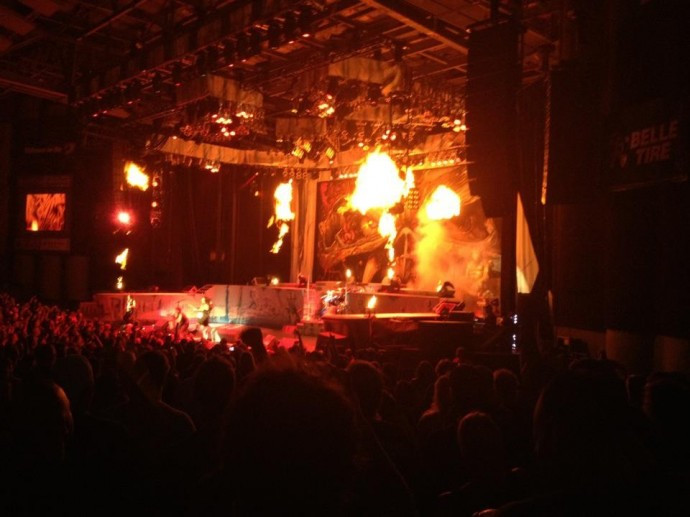 As always, DTE caused something to go wrong. Dickenson addressed the audience early in the set, apologizing for the small size of the stage prohibiting them from using certain special effects. Not that anyone would have noticed the difference; Maiden’s live show as-presented included an animatronic Satan during “Number of the Beast,” Eddie waving his sword around during “Run To the Hills,” a towering replica of the Seventh Son album art (complete with creepy moving heart) during “The Evil that Men Do,” and, oh yes, more vertical flamethrowers than I have ever seen before. “The damn stage is too small, we’ll just have to burn it down and build a new one,” Dickenson said. For an instant I wasn’t so sure he was kidding. What I’m certain of, however, is that I will never skip a Maiden tour ever again, if I can help it. Excitement? Well worth it.

–For those interested, here is a fan-shot video of the entire set of the same tour in North Carolina. It’s shaky, but the audio’s not bad!-