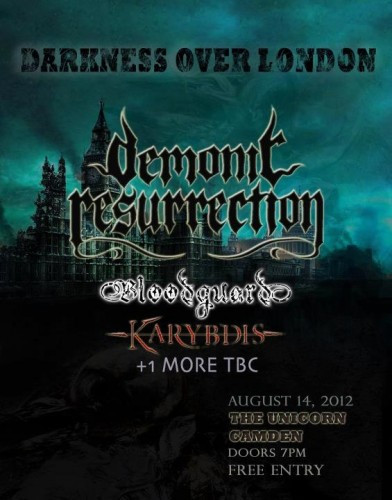 On August 12, 2012, the Closing Ceremony will mark the end of the 2012 London Olympic Games.  Two days later, on August 14, Demonic Resurrection, Bloodguard, Karybdis, and one more band to be announced will finish off whatever is left of London with a free live show at The Unicorn Camden.

The Closing Ceremony of the Olympic Games will be entitled “A Symphony of British Music” and will be broadcast worldwide. The DR-Bloodguard-Karybdis show will be entitled “Darkness Over London” and it will not be broadcast anywhere. Only those fortunate enough to appear in person at The Unicorn will get to witness the darkness, and they will not have to endure an endless parade of commercials, or an endless parade of athletes. They will also not have to pay anything to enter the venue, because the show is free.

A total cast of 4,100 performers will take part in the London 2012 Closing Ceremonies. A somewhat smaller cast will take part in “Darkness Over London”. However, it is unlikely that they will be wearing ridiculous costumes, opting instead for tasteful band shirts, or no shirts at all. We have not been advised as to whether they will be wearing pants. It will not cost anything to find out what they are wearing or not wearing, because the show will be free.

Organizers of the Closing Ceremony have reported that the August 12 event will feature “some of the country’s most globally successful musicians, along with some of the industry’s stars of tomorrow”. This means it is highly unlikely that the Closing Ceremony will include any metal bands, and therefore it is highly likely that it will be boring as shit. “Darkness Over London”, however, will feature some terrifically ass-kicking metal by three rising stars in the only industry that matters — The Industry of Metal.

Demonic Resurrection are one of our favorite bands (use this link to see all of the many posts we’ve written about them and/or their dynamo frontman The Demonstealer). They will be traveling from their homeland in India to the UK in August because they will be performing at the prestigious Bloodstock Festival, which takes place on August 9-12.

Bloodguard features our very own Andy Synn as the band’s frontman. Bloodguard are working on completion of their debut album, which will include an exciting list of guests as well as the exciting members of the band themselves (we reported some of the details here), and filming has been completed for Bloodguard’s first official music video.

And finally, Karybdis will be performing in the wake of their killer debut album’s release earlier this month — From the Depths — which we were privileged to premiere in a full-album stream at this location.

So, all you peoples within reach of The Unicorn on Camden Road in London, get yourselves there on August 14 and then tell me what a fantastic show I missed because I’m on the other side of the planet and my teleporter needs an oil change and some fissionable material, which likely won’t be delivered in time to make the jump on the 14th.

Did I mention that “Darkness Over London” is free?

P.S.  Demonic Resurrection and Bloodguard are trying to arrange one more UK show for the night of Monday, August 13, so if you know of an accommodating venue or someone who can help the guys sort something on short notice, please get in touch with Bloodguard (message them on Facebook).

3 Responses to “DARKNESS OVER LONDON”