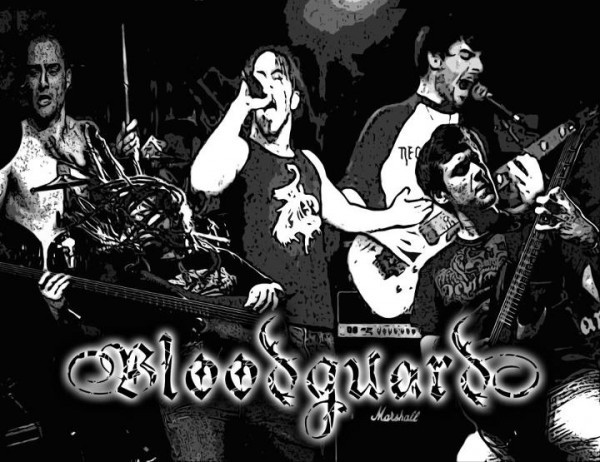 Earlier this month, Andy Synn passed his 18-month anniversary as a writer for NCS. His first post was a review of Dimmu Borgir’s Abrahadabra album. In all that time, Andy has rarely mentioned that in addition to writing about metal, he is also the vocalist for a UK metal band called Bloodguard. Maybe it’s that famous British reserve, or perhaps it’s because Andy is a gentleman and a scholar in addition to being a writer and a howler. I, however, am not limited by good manners or any sense of humility, and I have some news about Bloodguard that needs to be spread like the plague.

First, the band have now set the official track-listing for their debut album, Patterns In The Infinite, and this is it:

After the jump, you’ll find an album preview video that will give you a taste of what the songs sound like in their unmixed form, although the order of the samples in the video doesn’t match the track-listing. But first, there’s even bigger news, because I’ve discovered from Andy the identities of five guests whose talents will be enhancing Bloodguard’s new album — and it’s quite an exciting list: Arthur von Nagle (Cormorant), Michiel Dekker and Ivo Hilgenkamp (The Monolith Deathcult), Seth Hecox (Becoming the Archetype), and Demonstealer (Demonic Resurrection). 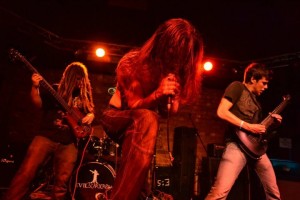 Arthur von Nagel, Cormorant’s vocalist and bassist, contributes his vocal talents to the song “Vanguard”. According to Andy, Arthur jumped in on short notice in a wonderful display of generosity and commitment. Lyrically, “Vanguard” explores themes of brotherhood and sacrifice and was crying out for collaborative vocals. As Andy explains, “Arthur stepped up to the plate, seemingly from out of nowhere, and helped to deliver an absolute monster of a track.”

Andy told me that “Footsteps (Of The Dead)” has been “suitably ruined and brutalised” by the twin vocal talents of Michiel Dekker and Ivo Hilgenkamp of The Monolith Deathcult, and I would expect nothing less. I understand that “Footsteps…” is the heaviest and most brutal track on the album, and so it’s fitting that these two joined in to pour some disgusting death metal vomit all over a crushing song about the inevitability and futility of war.

You may recall that last year NCS co-sponsored a UK tour headlined by Becoming the Archetype, and Bloodguard was along for that ride. Just before the Nottingham stop of the tour, Bloodguard apparently dragged Seth Hecox into the studio, “with no real plan except to sit him down and pick his brains for ideas.” As Andy explains: “The result of this collaboration was some truly weird sci-fi keyboards and effects which have been spread throughout ‘Black Math Ritual’, adding strange new angles to the song’s megaton grooves and technical guitars. Best of all this was a truly spontaneous collaboration, Seth really getting into the feel and style of the song whist adding his own unique take on things.”

And that brings us to the multitalented Demonstealer from India’s Demonic Resurrection. He contributed harsh screams and demonic growls on the album’s final track, the blackened blaster called “Bridgeburner”. It turns out that although Demonstealer was the final guest to be contacted by Bloodguard, he was the first to get his parts recorded and sent back to the band. Since it appears that sleep is an unknown state to Demonstealer, this is not surprising.

I will eventually worm this album out of Andy’s clutches once the final production work is completed, but for now what I have for you is this teaser clip of unmixed excerpts from the album. Check it out:

Head on over to www.facebook.com/bloodguardmetal to keep up with the album’s progress. Andy has hinted that more big announcements will be coming soon.