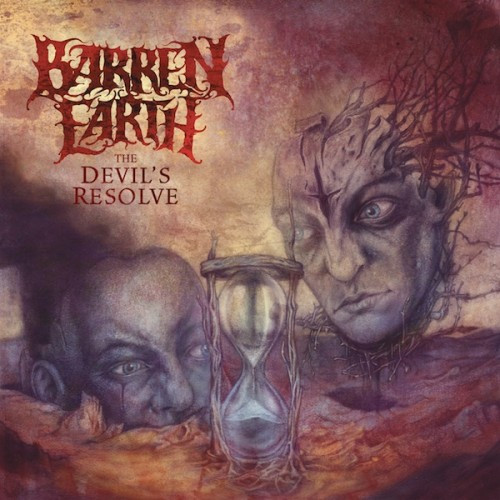 (DGR has been on a reviewing tear lately. In today’s installment, he breaks down the latest album by Barren Earth, which was released earlier this year on the Peaceville label)

My story with Barren Earth is pretty goddamn simple, but I feel that it needs to be told…if for no other reason than to explain why I suddenly seem so excited about a relatively ‘new’ band.

Barren Earth had been under way and gathering some steam, but it wasn’t until Scott (EvilLive, proprietor of Hookinmouth.net, currently writing for ThatDevilMusic) reviewed the group’s Curse Of The Red River release on TheNumberOfTheBlog and gave it the almost-never-used perfect score that I gave it a listen.

It impressed the hell out of me. I wasn’t aware they were a superstar side-project group of various doom and goth artists who had decided to do something a little closer to progressive death metal, with the occasional folk aspect and something a little bit retro-sounding, so the band came as a pleasant surprise. They are one of the few groups who can break out the 70’s-styled synths and keyboard sounds without sounding overtly cheesy. They also delved into some heavy, heavy stuff, too.

Less of a surprise when I heard the album and figured out that it was Mikko Kotamäki on the main vocals. The guy is almost instantly recognizable, and his participation in Barren Earth may have been part of why it took me so goddamn long to get around to this review. He is also the vocalist for Swallow The Sun, and their 2012 release (reviewed here), like this one, is incredibly long; it felt like I was overdosing a little. No fault of the album though. The tandem of new releases just affects the specific niche of people like myself who may have made the idiotic mistake of listening to both bands’ albums while attempting to stammer out some sort of review for both of them in close proximity. Some gentlemen from Amorphis and Moonsorrow have also been in Barren Earth for some time, handling backing vocals along with guitars and such.

Curse Of The Red River hit in 2010, so the release of The Devil’s Resolve just two years later, even with some production delays, and being of equal quality, has been fantastic. Also, just a heads up: This review is for the edition of The Devil’s Resolve that came with two extra songs. With some bands, you can usually skip out on the bonus tracks, and with some you shouldn’t. If you really like Barren Earth, you’re potentially giving up ten-plus minutes between these two songs. So if you have the regular edition, you should see if you can find those two on Itunes or elsewhere. 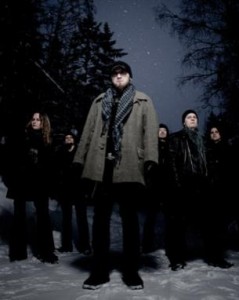 I’ll start by mentioning the incredible amount of keyboard work on this album. I may be misremembering Curse Of The Red River, but I don’t recall the synth lines being this pronounced. It is one of the bigger changes (other than an embrace of even more clean vocal work) to the Barren Earth formula between the two discs. Before, they seemed like a hybrid of all the bands the members were in before, with a desire to make prog-death in the vein of groups like Opeth, with a retro feel but without falling into full-on nostalgic/trapped-in-the-past/inspiration-worship/ball-licking territory. Now, I will be goddamned if I can get the stupid keyboard melody to “As It Is Written” out of my head. It just rocks back and forth between notes in a somewhat sing-song fashion and is prone to get stuck in your head easily.

It’s gotten so bad at times that I’ve had to re-listen to the CD a couple of times just to remind myself that there are other things on here besides that melody. This shouldn’t be taken as a mark against the rest of the music by any means; just consider it a warning that this song has serious earworm capability, and you will not be able to get rid of it for a while, no matter how many different turns toward the differing styles of goth rock, death metal, and the occasional drip of doom that this band takes.

This same basic idea is used to great effect in the group’s lead-off single for The Devil’s Resolve, “The Rains Begin”, as well. That’s another piano-heavy, mostly clean-sung song that I often got confused with “As It Is Written”, especially considering that on a ten-track disc they aren’t too far apart from one another. The two songs feel like kin in the way they are written, with a focus on synth-heavy melody. “The Rains Begin” is the more Finnish-goth flavored and Amorphis-like of the two songs, whereas “As It Is Written” makes the band’s more over-the-top intentions known with quiet bagpipes opening the song before things really fire off. With that introduction, it should come as no surprise when the main melody arrives and immediately goes high before swinging back down, moving in peaks and valleys.

In the new album, there’s also an increase in rhythms and textures from the Eastern side of the world. Probably to be expected, especially in a song entitled “Oriental Pyre”. This seems to be a bit of a trend at the moment, with more bands pulling from regions such as Asia and the Middle East for different melodies that you would hear in the folk songs of such places. Epica did it quite a lot on their latest release, although that was more explained by their decision to make the album sound up-to-date with the news cycle — and hey, guess where a lot of news is being made these days? Still, maybe those regions fascinate musicians from countries where it snows all the time and they never see sand outside of a beach? They work well in the new Barren Earth songs, though it does still feel like a bit of an increasingly familiar pull. However, that is part of what makes Barren Earth and by extension The Devil’s Resolve such an intriguing and exciting listen. 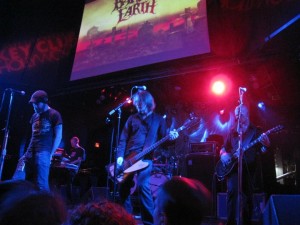 The band’s members are a collection of musicians from an all-star batch of groups and they really don’t have any rigidly set roles within this one. Pretty much everyone takes up the vocals at some point, whether it be backing or just echoing the main frontman from Swallow The Sun. I’m convinced that the only reason Mikko is really up front on the vocals is because he’s not also playing an instrument; otherwise, pretty much everyone would be all over the mic.

Mikko really does get to put his clean singing voice to use here, too. It is something he’s already been getting serious mileage from with his own band, but here there are whole songs where the only time he growls is to punctuate certain phrases before pretty-boying it right back up. He tailors his voice well to fit each song without drifting into the cold, detached, and depressed singing voice for which I’ve come to know him. He also breaks out those deep, bellowing growls on the more death metal focused passages in each song, and they fit just as well.

There’s not really a fully-blown death metal song on the disc, but that is because Barren Earth like to drift between genres and movements within each track, which does create a weird flow to the song-lengths on the album. The opening track is something of a seven-and-a-half-minute crawler before dropping into the more upbeat “The Rains Begin”, which means that there is one heck of a barrier to entry before you really get into the meat of The Devil’s Resolve.

The keys, as I mentioned before, are prominent as all hell here and they even begin to move into full-blown 70’s-prog territory a couple of times. It’s as if Barren Earth beat the hell out of the guys from Bigelf and forced them to give up their equipment, because, man, does that stuff stand out. It’s the first time that Barren Earth have really felt overstated in their two-disc lifespan. The rest of the band, from the guitar work that soars through so many different songs and a bass that just rumbles throughout the whole album, to the drums that provide the solid backbone, clearly know what the hell they are doing. They provide the sonic foundation on which the album is built. At times they are paying tribute to progressive, then to death metal, and then occasionally things get a little doom-heavy before jumping back into the jauntiness of a folk metal song.

The guitars do some light melody work but mostly build a lot of atmosphere and rhythm, leaving the ear-worm work to the keyboard. Bass is mixed in quite well and makes the whole CD sound more monolithic and full. My car’s speakers suck shit, and I was still able to identify where the bass was in each song. So you could say that a disc like this has a natural production to it instead of the cranked-to-the-max wall of sound that metal has been known for. 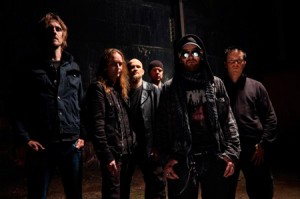 Drums are the same way. They’re not overbearing in any sense and work well in just about every song. Marko Tarvonen is great behind the kit, but again, I have to re-emphasize that this is one of the few all-star groups where it’s completely evident that everyone knows their shit, so it feels weird trying to compliment and analyze any one individual’s performance. Just go into The Devil’s Resolve knowing that it sounds great and that Barren Earth have composed their music damn well.

The Devil’s Resolve, like Curse Of The Red River, is a dense album to get into. They throw a bunch of different ideas into each song, all of which work seamlessly with one another to make a pleasant listening experience, one that’s far more prog than death metal. There are catchy songs alongside some more heavy and monstrous tracks for sure, and the two bonus tracks that you can get are no slouches in the ten minutes they take up either. Quality-wise, it lines up right next to Curse Of The Red River, and  so if you really enjoyed that disc, then knowing that you’re going to get more, with some light changes, should probably have you at full mast.

Though there is the potential burnout factor that may come from listening to this album and the new Swallow the Sun, immersing yourself in over two hours of their frontman’s voice, if you take this disc on its own, it is a good hour-plus exploration of the different styles that make up the band members’ individual scenes. It’s what happens when you get guys who are veterans of those styles to sit down and be creative together. This is a sleeper band who should be noticed far more, and I recommend that you give The Devil’s Resolve a listen. If it’s your first time, congratulations: It’s easily enjoyable. If you have Curse Of The Red River, you know what you’re in for here, and it stands up just as well.