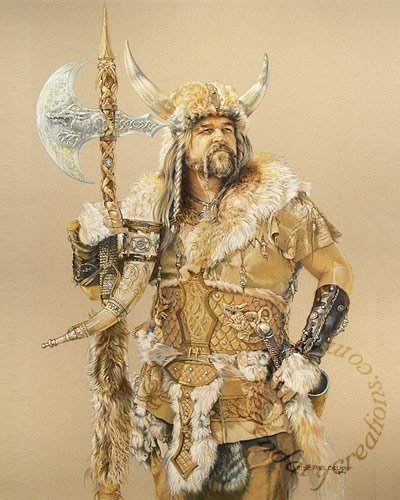 Okay, the headline on this post is an exaggeration, (a) because I have no idea what you know about Vikings, and (b) because everyone probably knows one thing about the Vikings that’s true (even if the only thing you know is that the Vikings are an NFL team in Minnesota). I just wanted to get your attention.

But based on this article that BadWolf sent me, even though not everything we know about Vikings is wrong, we seem to be off-base on a lot of things. For example, it appears that Vikings were metrosexuals. Instead of being filthy, bestial barbarians, several archaeological finds have revealed evidence that cleanliness meant a lot to the Vikings, with the discovery of tweezers, combs, nail cleaners, ear cleaners, and toothpicks from the Viking Age. And then there’s this statement about the Vikings in a chronicle by a Brit named John of Wallingford in the year 1220:

”They had also conquered, or planned to conquer, all the country’s best cities and caused many hardships for the country’s original citizens, for they were – according to their country’s customs – in the habit of combing their hair every day, to bathe every Saturday, to change their clothes frequently and to draw attention to themselves by means of many such frivolous whims. In this way, they sieged the married women’s virtue and persuaded the daughters of even noble men to become their mistresses.”

According to Louise Kæmpe Henriksen, a curator at the Viking Ship Museum in Roskilde, Denmark, picture sources show that the Vikings had well-groomed beards and hair. “The men had long fringes and short hair on the back of the head,” she says, adding that “the beard could be short or long, but it was always well-groomed. Further down on the neck, the skin was shaved.”

All this is really disappointing to me, and undoubtedly to many other metalheads for whom Vikings are an iconic representation of Scandinavian metal, as well as barbaric metal generally. I may not be able to think of Amon Amarth the same way again.

According to that article, real Vikings didn’t wear horned helmets because horns would have been impractical in combat. Instead, they used iron helmets for protection. It turns out that it wasn’t until the end of the 19th century that people started drawing Vikings wearing horned helmets because the villains in a popular Wagner opera wore them; older carvings and representations of Vikings that date closer to the age of the Vikings apparently don’t show any horned helmets. From The Font of All Human Knowledge:

“No depiction of Viking Age warriors’ helmets, and no preserved helmet, has horns. In fact, the formal close-quarters style of Viking combat (either in shield walls or aboard “ship islands”) would have made horned helmets cumbersome and hazardous to the warrior’s own side.” 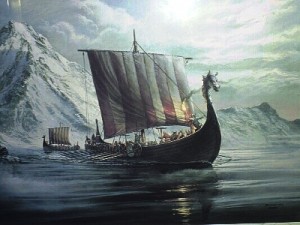 Fuck is up with that? Another fond piece of brutal pagan imagery shattered beneath the hammer of knowledge.

That article also says that the attire of the typical male Viking “consisted of a linen kirtle – a long shirt which the men pulled over their heads”, with a woolen coat worn over it, and knee-length trousers, “usually sewn in the style of pantaloons”. So much for animal skins and pelts.

I dunno, maybe the Vikings strapped on the animal skins and pelts when they went raping and pillaging . . . correction . . . when they went wooing and seducing.

That article linked above isn’t the only source of information suggesting that the popular conception of Vikings is at odds with historical evidence. Here’s another quote from The Font of All Human Knowledge:

“Popular conceptions of the Vikings often differ from the complex picture that emerges from archaeology and written sources. A romanticised picture of Vikings as Germanic noble savages began to take root in the 18th century, and this developed and became widely propagated during the 19th-century Viking revival. The received views of the Vikings as violent brutes or intrepid adventurers owe much to the modern Viking myth which had taken shape by the early 20th century. Current popular representations are typically highly clichéd, presenting the Vikings as familiar caricatures.“

Sigh. Well, though depressed over these discoveries, I’m still taking comfort in the fact that the Vikings did in fact kick a lot of ass, and kicked it far and wide, establishing their presence as far west as what is now North America and eastward into Russia, even if they remained clean and well-groomed and un-horned while engaged in the kicking of ass.

17 Responses to “EVERYTHING YOU KNOW ABOUT VIKINGS IS WRONG”