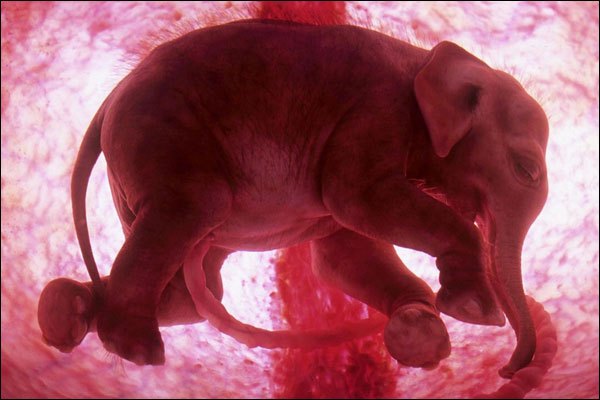 Here we go again — things that are metal even though they’re not music.

In today’s installment we’ve got seven items, ranging from elephant fetuses to dudes standing below the detonation of a nuclear bomb to a monster-tractor demolition at a police station, and a lot more fun.

Back in 2006, the National Geographic channel aired the first of several specials that focused on the development of life in the womb. Apparently they used a combination of 3-D and 4-D ultrasound imaging along with computer graphics to create the imagery. I never saw those specials, but I recently came across still photos from them that are pretty amazing. One of them is above. That’s a computer-enhanced image of an Asian elephant fetus.

More photos are after the jump, showing the fetuses of a dolphin and a Golden Retriever. I’m not sure how much the CGI is contributing to this, but it still looks very cool. 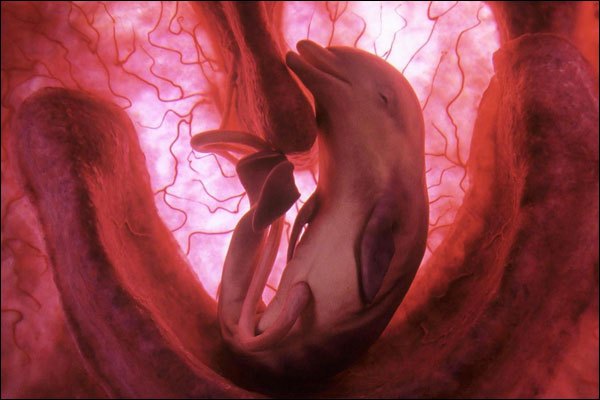 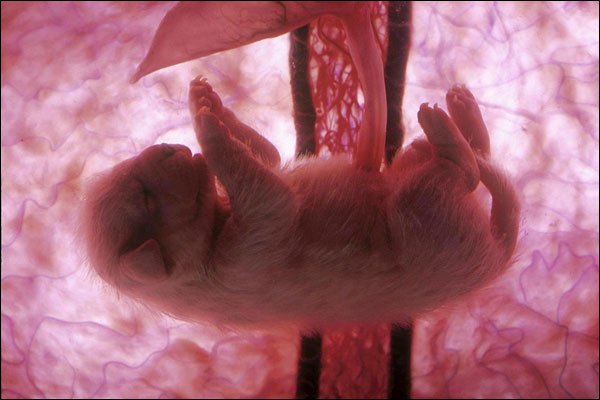 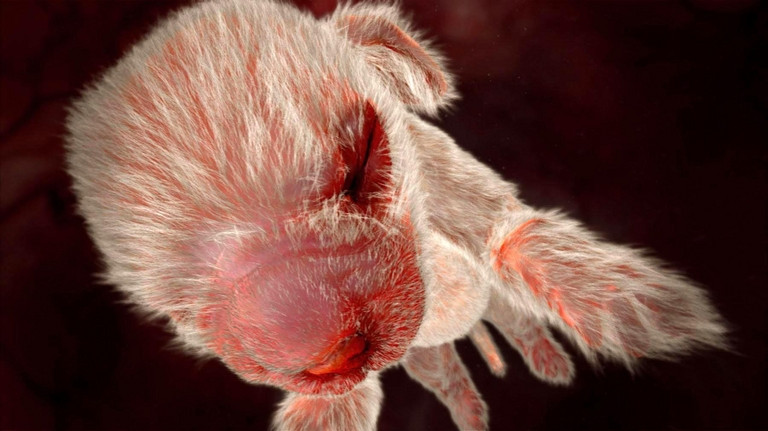 There are other ways that things can be metal besides being awesome. I’m talking about behavior that’s at the height of imbecilic extremity. This next item is a prime example of that. It’s fucked up on so many levels, I’m not even sure where to begin. As described at NPR:

“On July 19, 1957, five Air Force officers and one photographer stood together on a patch of ground about 65 miles northwest of Las Vegas. They marked the spot “Ground Zero. Population 5” on a hand-lettered sign hammered into the soft ground right next to them.

“Directly overhead two F-89 jets roar into view, and one of them shoots off a nuclear missile carrying an atomic warhead. They wait. There is a countdown; 18,500 feet above them, the missile is detonated and blows up. Which means, these lunatics intentionally stood directly underneath an exploding 2-kiloton nuclear bomb. One of them, at the key moment (he’s wearing sunglasses), looks up.”

All of these guys except the photographer volunteered for this experiment. Amazingly, it appears that almost all of them lived to ripe old ages, and the photographer still seems to be alive, in his 80s. The people who lived downwind of the Nevada Test Site in a place called St. George, Utah, weren’t so lucky. The town was repeatedly hit by radioactive fallout from the testing, and over the years it appears that the U.S. government has paid some $813 million to more than 16,000 “downwinders” to compensate them for illnesses presumably connected to the bomb testing program.

Oh yeah, in case you were wondering why the fuck these dudes volunteered to be filmed standing beneath a nuclear detonation, there’s this explanation in the NPR article — which I highly recommend you read in toto, because it’s fascinating:

“The country was just beginning to worry about nuclear fallout, and the Air Force wanted to reassure people that it was OK to use atomic weapons to counter similar weapons being developed in Russia. (They didn’t win this argument.)” 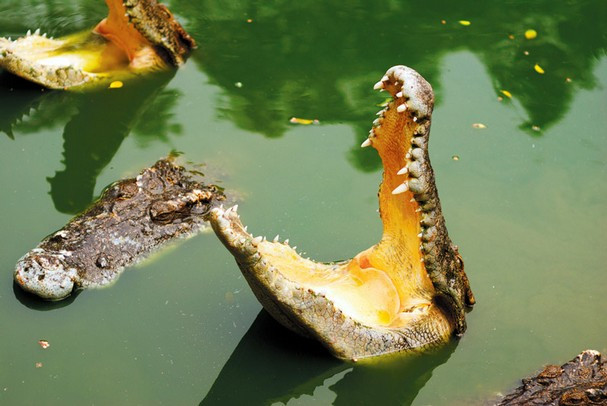 We might as well stay with things that are metal because they’re so fucking ridiculous. Here’s a story I saw last week on the web site of one of Seattle’s local TV stations. Gotta love the headline.

“Talk about adding insult to injury: A Florida tour boat captain whose left hand was eaten by an alligator has been charged with illegally feeding the reptiles.

“Wallace Weatherholt, 63, now faces a misdemeanor charge of unlawful feeding of an alligator, and is slated to return to court on Aug. 22 to face the charges, according to the Fort Myers News-Press. He faces a fine of up to $500 and possible jail time, the paper reported.

“The defendant was working for Captain Doug’s Everglades Tours last month when he took six tourists out on the water and paused to give them a thrill — and a photo op.

“Witnesses say he began slapping the water to attract alligators, using marshmallows and fish as bait. That’s when a 9-foot alligator breached the surface of the water and clamped down on Weatherholt’s left hand.”

“Weatherholt was airlifted to a hospital. Authorities tracked down and euthanized the alligator, and even retrieved the hand from its stomach, but reattachment was not possible, according to news reports.”

I’m trying not to laugh, but shit, sometimes the misfortune of others is just too funny. Of course, some people (besides that poor fucker Wallace Weatherholt) didn’t find it so funny. Here’s a quote from a related story: “Animal rights activists on Thursday denounced the decision to kill the alligator in a bid to recover the man’s hand. They said the captain, who is now under investigation for feeding the animals, is to blame for teaching the fearsome creature that people = food.”

Y’know, if I were Wallace “Stumpy” Weatherholt, I’d be pretty fucken pissed at the law enforcement authorities for prosecuting me after severe punishment had already been meted out by that gator. Other people not only get pissed at the law, they also get even — like this dude in Vermont.

“A man on a big farm tractor, angry about his recent arrest for resisting arrest and marijuana possession, was rolling across their vehicles — five marked cruisers, one unmarked car and a transport van.

“By the time they ran outside, the tractor was down the driveway and out onto the road.

“With their vehicles crushed, “We had nothing to pursue him with,” said Chief Deputy Philip Brooks.

I really wish there was video of this, but at least we’ve got pics: 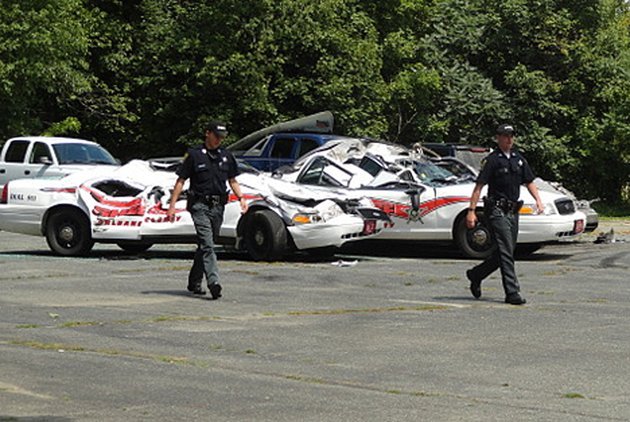 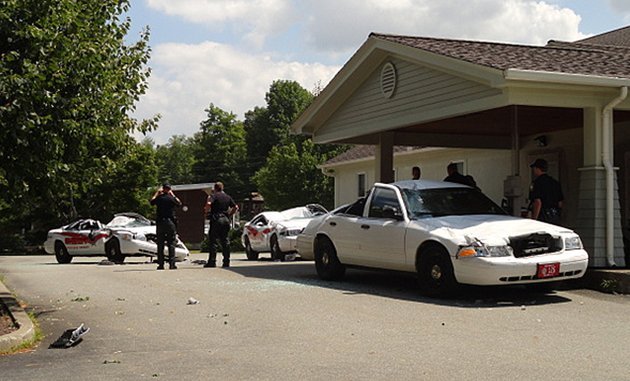 Of course, the angry farmer, 34-year old Roger Pion, was arrested. At last report he was being held on $50,000 bail. Free Roger!

(via Yahoo News — and thanks go to Phro for the tip on this one.) 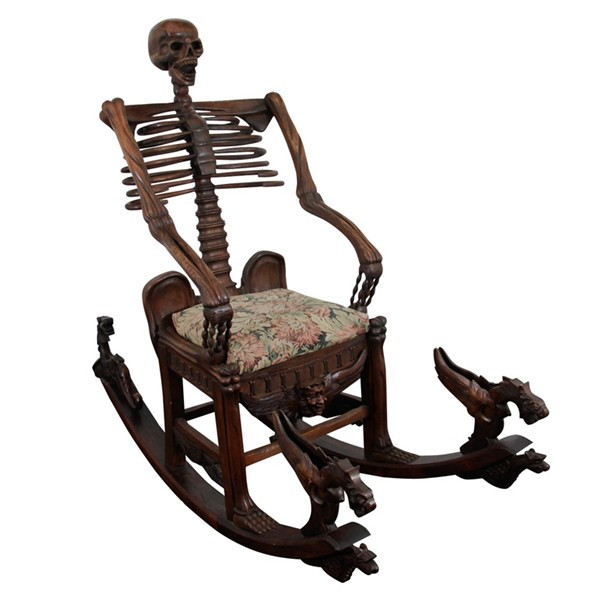 When it’s time to fuckin’ rock, this is the kind of chair you need to use. Based on the description at the web site of an auction house that sold it, this is a carved mahogany “memento mori” rocking chair depicting a skeleton figure on rockers terminating in dragons. The site indicates that it was probably modeled after a mid-19th Century Russian chair that’s apparently illustrated in the book 19th Century European Furniture by Christopher Payne. Here’s another rockin’ chair based on the same idea: 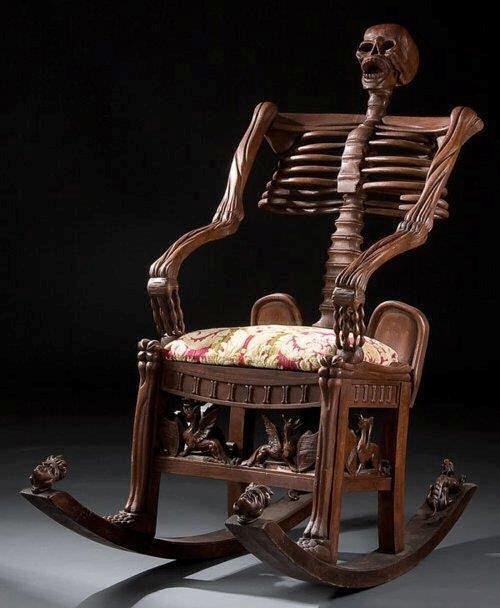 This chair appeared on a different auction site. No dragons on the rockers, but still definitely metal. 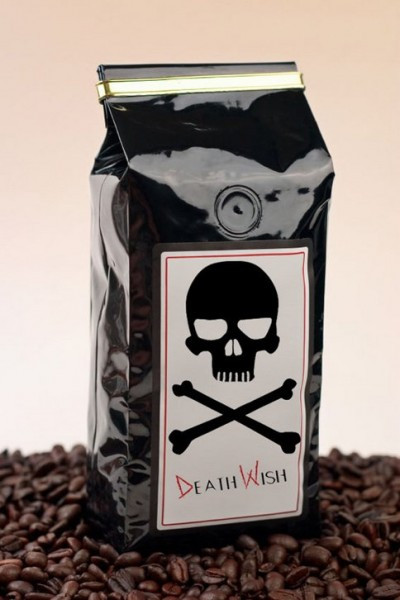 I looooove coffee. Love it. Drink it all day long. Usually, I like to drink straight espresso after the work day begins, but in the mornings I use drip coffee to get the mighty engine that is me fired up and operational. I like dark roast, made really strong, the kind where the spoon stands straight up in the coffee. So of course when I saw that photo above, I couldn’t resist finding out more.

Death Wish Coffee is a New York roasting company that has created what it calls “the world’s strongest coffee,” an eco-friendly gourmet brew with 200 percent more caffeine than the average dark roast. Death Wish Coffee bills itself as “the responsible coffee company with an irresponsible product.”

Death Wish points out that most dark-roasted premium brews actually have less caffeine than lighter-colored and cheaper coffee. So they found a variety of Arabica beans with dramatically higher caffeine content. They’re selling the shit for $19.99 a pound and they offer a full refund if you don’t like it.

Of course, I’ve ordered a pound, because getting ridiculously caffeinated, jittery, and having to pee all the time is metal. Isn’t it?

Actually, I mainly want a bag of coffee called Death Wish with a skull and crossbones on it. Fuck yeah.

The Death Wish Coffee web site is here. (via Presurfer) 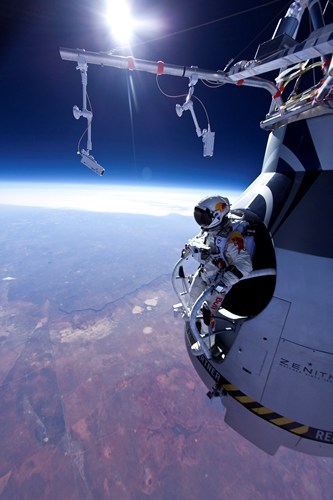 I found out about this final item by reading one of Phro’s Facebook posts. I get queasy just thinking about it.

The subject of this item is skydiver Felix Baumgartner, also known as “Fearless Felix”. Felix is a 43-year old Austrian who has been skydiving since he was 16. He has made more than 2,500 jumps so far — not only from planes and helicopters, but also BASE jumps from structures such as the world’s tallest building in Taipei, Taiwan (1,669 feet) and the world’s tallest bridge in France (1,125 feet).

He’s currently involved in a project called Stratos, which is being funded by Red Bull. The goal of the project is for Fearless Felix to jump from a height of 120,000 feet and break the sound barrier with his body as he falls. Are you starting to get queasy, like I am? 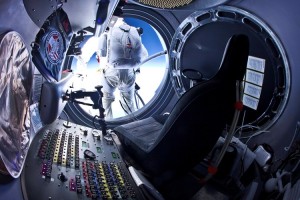 He has already made two test jumps, working his way toward the big one. On July 25, in the second of those, he successfully jumped from a height of 18 miles (29 kilometres) above the Earth — 97,063 feet (or 29,584 meters). He completed a free fall in which he reached the speed of an airliner – 536 miles per hour (864 kilometres per hour) — landing safely near Roswell, New Mexico (but of course).

To reach that height, Baumgartner ascended alone in an enclosed capsule lifted by a giant helium balloon that took off from Roswell. He wore a full-pressure suit equipped with parachutes and an oxygen supply — because there’s virtually no atmosphere up where he began this jump.

More details can be found in this write-up and at the Stratos web site.

Unfortunately, I haven’t found any helmet-cam video of the jump itself. Or maybe that’s a good thing, because watching it would probably make me vomit. But there is this Stratos video which shows the lead up to the jump and its finish, as Felix glides back to Earth. Very fucking metal. Also, insane.