(Here we have yet another review by TheMadIsraeli, catching up on 2012 releases that have impressed him. Today, it’s the new one from Nile, which is out now on the Nuclear Blast label.)

As much as it may have sucked total ass in the mainstream, underground metal in the 90’s was one of the absolute definitive highpoints of the music’s evolution to me.  A huge component of this was the surge of brutal tech-death giants, most of whom (though not all) somehow have managed not to stagnate one bit, still putting out consistently killer albums while retaining the defining qualities that make these bands who they are.  I’m speaking of Suffocation, Dying Fetus, Immolation, Cryptopsy, and obviously in today’s case, Nile.

Nile, like almost all the bands listed above, have a virtually flawless discography.  I think the only guilty party in that list who turned out to be an exception needn’t be named, but Nile is definitely a band who’ve never committed such a gaff. Their new album,  At The Gates of Sethu, is a monolithic assault of Nile’s esoteric brutality that’s just as good as any of their other work (which is to say fucking excellent), though it seems to be drawing criticism via the tropes and trivialities of the modern metal crowd.

I digress briefly with a rant: I hate most modern metal.  I may find a modern metal band worth checking out here and there, and even more rarely, one that I deem fucking excellent.  However, I hate modern metal as a whole.  I hate the sentiments it comes with, what the crowd expects from the music, and the general idea that if something is not groovy, if it doesn’t have slick, pristine production that’s sterile and as stale as an open three-week-old bag of chips (even though it might very well capture the full spectrum of sound), if it doesn’t have lame, half-assed attempts at syncopation, and if it lacks clean vocals, then it’s bad. Even more obnoxious and condescending is the notion that music which fails these criteria is not relevant, not “with the times”, or some cockamamie horse shit like that. 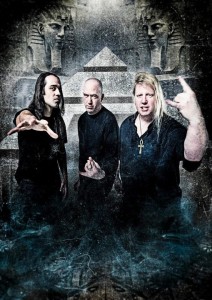 The aspect of Nile’s new album that seems to be drawing the most fire from this crowd is its mix, which is classic Nile: It sounds like it was recorded at the bottom of a well while obsidian spearheads were raining down from the sky.  Since when did mix cease to be an integral part of the art anymore?  I’ve had numerous dialogues with Nayon from our friends Heavy Blog Is Heavy about this, about how modern metal separates the music from the production, with the latter as simply a delivery vehicle for the former, creating a piece of art and then slapping a pretty coating on top of it rather than dialing in a mix that suits the mood and character of the music.

But ranting about modern metal bullshit aside, this album fucking slays.  I’d even put this in the upper echelon of Nile’s catalogue, a controversial statement considering that it appears many of the vocal Nile fans currently out there only caught onto the awesome at Annihilation Of The Wicked.  This is definitely a Nile album more focused on a return to old-school roots — dare I say, this is In Their Darkened Shrines, part two?

The album overall contains much more of the absolutely ruthless speed-based evisceration of Nile’s first three albums. The more recent progressive tendencies are still present, but it’s refreshing to hear them incorporated in a way that didn’t require resort to faux-dynamic songwriting and heavy-handed attempts to come off as “epic”.  The post-Annihilation era of Nile was also excellent, but I’ve often found it refreshing when a band is able to take two steps back and, in the end, is all the better for it.

“The Eternal Molestation Of Flame” leaves absolutely nothing to be questioned or wondered about as far as whether Nile still have “it” or not.  After some bone-chilling atmospherics and pained moans and screams, the song kicks into full gear with a mammoth-sized syncopated groove that launches straight into a flurry of classic Nile fretboard-torching antics.  Loaded with transitions, the music constantly bounces back and forth between flesh-rending hurricanes and sumo-stomping drudge, the kind of thing at which Nile really, really excel.

You’ll also notice that Dallas Toler-Wade has brought back the evil Egyptian-priest vocals from Nile’s older days (something that’s also received a lot of silly, uninformed criticism.  I guess it isn’t brutal enough or something?).   I find it a refreshing change.  They are a nice, sharp cutting instrument, as opposed to the blunt nature of Karl Sanders’ gutturals. 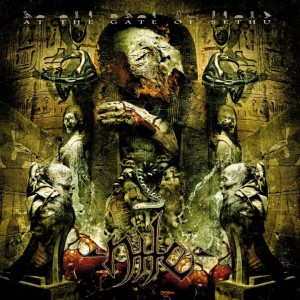 The album’s single, “The Fiends Who Come to Steal the Magick of the Deceased” (these fucking song names) is a very straightforward affair.  The riffs are powerful, technical, and punctual in their delivery of knife wounds and broken bones on a silver platter.  It’s insanely fast and reminds me of the beauty of George Kollias’ tightness as a drummer, as the speed-picked main riff combines with his machine-precise blasts.  The Egyptian ethnic influences are more prevalent in this song, with the presence of sitars and clean vocals invoking an  Egyptian ethos perhaps more so than the attempt to create appealing melodies.  It’s an eerie vibe, so very much appreciated.

“The Inevitable Degradation of Flesh” is the fastest song on the album thus far.  With vicious riffs, a black metal-esque chorus, a bridge with a killer groove, and some of the catchiest riffs Nile have yet written, it’s another stepping-stone on this album’s journey of condensed ass-whooping.

“When My Wrath is Done” is the first of the groovier numbers to be found on the album; although in its essence it’s definitely still dedicated to the ways of brutality.  Its main riff, simple and to the point, is backed by shittons of double-bass and a pounding war-anthem cadence.  The song’s explosion into a speed-fest during the solo is both quite cool and unexpected, as the drum line somehow transitions from tasty syncopation into thrash beats seamlessly.  It’s really something that needs to be heard.

This is followed by “Slaves of Xul”, a percussion-oriented, tribal number with the soul-rending vocal tandem of Dallas and Karl spewing blood and bile all over it.

“The Gods Who Light Up the Sky At the Gates of Sethu” (FUCKING SONG TITLES AGAIN) is one of my favorite tracks on this album.  Its monolithic main groove is absolutely devastating. Listening is like being run over by tanks with spiked treads and processed into meat for dogs of war to feast upon.  The riff is stupidly memorable, and the rest of the song is utter feral insanity. 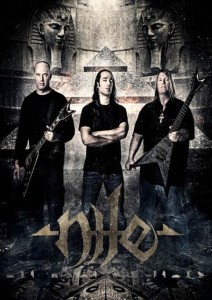 The song after, “Natural Liberation of Fear Through the Natural Deception of Death”, is another blazing storm of hellfire.  “Ethno-musicological Cannibalisms” follows this up nicely with a straight-up bit of Egyptian folk instrumental serenity.

“Tribunal of The Dead” is yet another groove-oriented song, and one of the most brutal of the groovier songs Nile has written.  After the song delivers a taste of ethnic ambience, the opening riff hits with all the weight of the best of funeral doom.  Its an eerie harmony that is both aesthetically consistent and soul-rending in its morbidity.  The song’s main riff crushes and decimates, as if the Sphinx itself were crashing into the Earth repeatedly.  The rest of the song is just fucking mummification to the max.

“Supreme Humanism of Megalomania” is my favorite song of all, full of powerful riffs and entrancing lead guitar melodies that hook you from the onset, and the final offering, “The Chaining of the Iniquitous” provides an amazing conclusion — it’s a seven-minute doomy epic, full of sludge, grime, and arcane fervor.

I don’t know man.  It’s fucking Nile.  This band pretty much floors almost everyone in the modern death metal scene.  Acquire “At the Gates of Sethu”, disregard all that other horse shit.