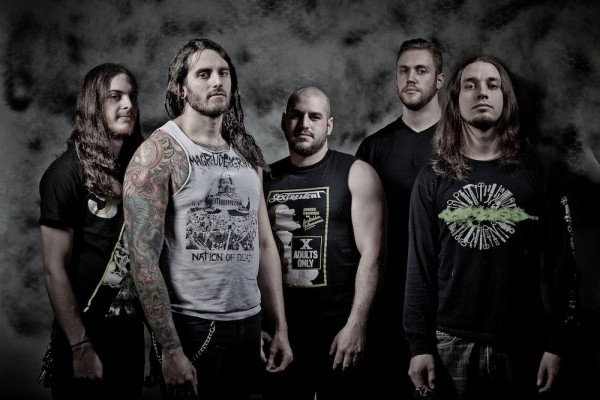 Job For A Cowboy’s 2012 album Demonocracy got high marks from our Andy Synn, who called it this band’s best album yet: “Preconceptions be damned, this is a fine slab of dark, meaty death metal.”

The album’s closing track, “Tarnished Gluttony”, is a dynamic turn from much of the rest of the album — a long, slow, crushing piece that exudes a sensation of apocalyptic doom. Today, Blood Disgusting premiered a nearly nine-and-a-half minute official video for that song (the music in the video adds a dirge-like instrumental segment to the album’s song, as accompaniment for part of the story until the music on the album track resumes again).

The video puts an imaginative Lovecraftian spin on the song that isn’t present in the lyrics, yet there is still a thematic linkage, as the band’s frontman Jonny Davey explained in a statement that we’ll quote after the jump. Much of the video moves in slow motion, matching the slow pacing of the song, and the integration of the visual story and the terrifying music is beautifully done.

Actually, the whole thing is just brilliant, though there’s a graphically gory sequence that may affect where you choose to watch this. Credit goes to director  Michael Panduro (the man who direct Cephalic Carnage‘s “Ohrwurm” video) and actor Morten Klode. Panduro is quoted as saying: “As a commercial director, I’m a complete failure. The band asked for just one thing and I couldn’t deliver. Indeed, this video has no boobs.” No, it doesn’t, but it’s a riveting thing to watch nonetheless.

Here’s Jonny Davey’s statement about the video, followed by the video itself:

“‘Tarnished Gluttony’ originally runs off the idea of blind faith into our government and monetary system. The director ran with the idea and spliced it with a H.P. Lovecraftian twist. The video streams the fascination of religion and the actions people justify in the name of religion, and this video is a spin on the old biblical tale of Abraham and Isaac, however, set in the world of Lovecraftian mythology. The point is, acting blindly in faith to a Christian deity is just as absurd as worshiping squid like monsters from space who live under the sea.”

29 Responses to “JOB FOR A COWBOY’S NEW VIDEO FOR “TARNISHED GLUTTONY” MAY NOT HAVE BOOBS, BUT IT’S STILL BRILLIANT”