The United States has always been run by a plutocracy whose power has rarely been challenged in any meaningful way, regardless of which political party happens to be in office. For complex reasons, class warfare has just never really been a serious factor in the civic and political life of the U.S. The big dogs gobble up an ever-increasing share of the pie, and most people don’t ever seem bothered enough by it to rise up politically and demand that their own interests be put first. But as a people, strangely enough, we do like to root for the underdog, and we tend to cheer when the underdog wins. I’m no exception . . . and hence, this story.

Wacken Metal Battle is a globe-spanning competition designed to showcase up-and-coming bands in the world of metal, and this year it celebrated its 10th anniversary. National competitions are now held in 33 countries, with the winner of each national competition journeying to Germany to perform on the first day of the Wacken Open Air festival, playing for all the marbles. And it’s a big bag of marbles, too. Apart from the thrill of getting to play at the world’s biggest metal fest, the winner this year was to receive a world-wide record deal with Nuclear Blast and a shitload of other prizes, such as a Marshall Full-Stack, Washburn guitars, and Paise Boomer cymbals (the whole list of prizes can be seen at this page).

For the first time in 2012, the Faroe Islands joined the Metal Battle competition. The Faroe Islands are a country consisting of 18 mountainous islands located in the North Atlantic between Iceland and the rest of Scandinavia. The total population is about 49,000, with nearly half the people living in the capital region of Tórshavn. They are the descendants of Vikings (and Irish), they have their own language, and they have metal (as those of you who know bands such as Týr, The Apocryphal Order, or SiC are well aware).

This year, eight bands competed in the Faroese national Metal Battle event, and the winner was a band named Hamferð. Hamferð made the trip to Germany and took the Wacken W.E.T. stage on August 6 to throw down against bands from throughout Europe, plus countries as far away as China, Japan, Russia, Mexico, and Brazil. And guess who won the whole thing, as their nation’s first-ever competitor in Wacken Metal Battle? That’s right — Hamferð did.

When I saw this news, of course, I had to find out more about Hamferð and their music. And here’s where things get wilder still — if that’s possible. Their entire recorded output consists of one four-song EP released in 2010 by the name of Vilst er Síðsta Fet — and yes, Hamferð sing in Faroese (according to the band’s frontman, the title means something like “lost is the last footstep”). I found Hamferð’s EP on Amazon mp3 for less than $4 and bought it, and listened.

There may be only four songs on the EP, but three of them are more than 8 minutes long, and doom is the name of the game. The songs are slow and majestic, both crushing and soaring, with vocalist Jón Hansen’s remarkable voice providing the lift as well as the grit of abrasion and a soul-sucking depth. The melodies are drenched in melancholy and occasionally tinged with folk elements. The riffing and guitar leads are distorted and dissonant when they need to be and achingly beautiful at other times.

The songs also move in completely unpredictable directions, from brute anvil smashes to odd prog-style meanderings to sludgy groaning to sublime acoustic passages, with tempos and rhythms that are equally difficult to nail down — and so great is Jón Hansen’s range (in both pitch and vocal style) that he finds the right voice for each change of course. Truly an amazing vocal performance.

I’m tempted to throw around names like Swallow the Sun, Paradise Lost, and My Dying Bride, because I’m reminded of their music, but that would sell Hamferð short. The overarching style may not be new, but they own their own music, and it’s powerfully affecting.

This song, which manages to be both jarring and hypnotic, is called “Vráin”:

And this one is “At enda”, which just completely floored me: 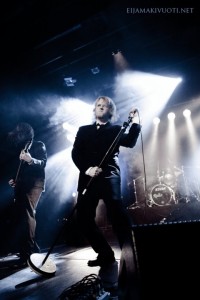 To find out more about Hamferð, you might check out this interview that I found and visit them on Facebook, too.

And I know you’re wondering (unless you happen to be Icelandic or Faroese), but that consonant at the end of the band’s name (ð) is called an “eth” and although it has a “th” sound in Icelandic, I’m not sure it has any sound in Faroese (at least based on my reading in The Font of All Human Knowledge). So I suppose the band’s name could simply be pronounced as if spelled “Hamfer”.

And there you have it, the end of my underdog story. And when Hamferð finish writing and recording their debut album and Nuclear Blast releases it to great fanfare, you can tell everyone you know that you heard about them first at NCS . . . unless you didn’t.