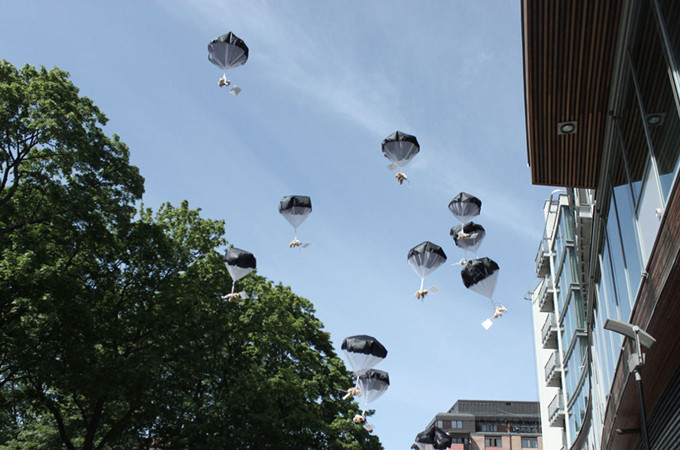 Good morning, good afternoon, good night, to all our metal brethren and sistren of all time zones, and welcome to another edition of THAT’S METAL!, in which we take a rare break from hammering our heads with extreme music and instead root around like truffle-hunting pigs in search of delicious images, videos, and news items that we think are metal, even though they’re not music. I have eight items for you today.

Our first item is metal on almost too many levels to count. It involves an unusual advertising agency based in Sweden by the name of Studio Total. They work for clients, but their philosophy is not to pay anyone for advertising space. Instead, they do things designed to get people talking, for free. To draw attention to whatever brand, product, or cause they promote, they’ve pulled some . . . out-of-the-box stunts. This is a story about their most recent adventure.

Studio Total decided to work, without charge, for an organization called Charter 97, which is a pro-democracy news site located in Belarus. Belarus is a country to the west of Russia, north if the Ukraine, and east of Poland. Since 1994, it has been run by an autocratic asshole named Alexander Lukashenko, often referred to as “Europe’s last remaining dictator”. Belarus’ Democracy Index rating continuously ranks the lowest in Europe, and it’s labeled as “Not Free” by Freedom House.

To highlight Lukashenko’s repressive policies against free speech, Studio Total chartered a small private plane, and the agency’s co-founder Tomas Mazetti and another employee, Hannah Lina Frey, illegally flew it into Belarus air space on July 4, dropping 876 teddy bears by parachute on the capital of Minsk and the small town of Ivyanets. The teddy bears each held small signs reading, “Belarus freedom” and “We support the Belarus struggle for free speech.” 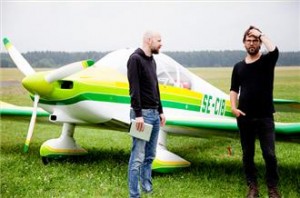 Mazetti, who piloted the plane, explained one of his motivations for the stunt: “The Teddybear Airdrop Campaign is dedicated to my godfather Apostolis who was tortured and jailed for talking too much by the military Junta in Greece (forty years ago) but still can’t be quieted for even a minute!”

For weeks, Belarusian air defense forces denied that a Swedish plane had overflown the country and dropped a payload of teddy bears, claiming that videos of the event were faked. But, of course, the incident infuriated President Lukashenko, who fired two generals over it, and eventually admitted that Studio Total had succeeded in penetrating his country’s ridiculously expensive air defense apparatus.

He accused Swedish diplomats of somehow being involved in the episode, and his government prevented Sweden’s ambassador to Belarus from returning to the country. Sweden reciprocated by barring entry to the new Belarusian ambassador to Stockholm and asking two junior Belarusian diplomats to leave the country. Lukashenko’s regime then ordered the Swedish embassy in Minsk to close.

Here’s Lukashenko’s explanation for Studio Total’s embarrassing success in invading Belarus: “They should thank God that our calm people had pity for those pilots. They should pray for our air defense forces, our border guards who spotted them right over the border and pitied them.” Yeah, right. 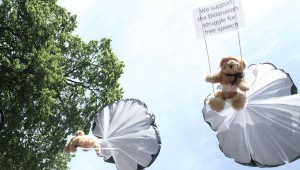 Oh, but the story gets even juicier. This weekend the top Belarus security agency — the KGB — posted a summons on their web site, demanding that three Studio Total personnel, including Mazetti and Frey, return to Belarus for questioning. The agency has threatened the Swedes with fines a fine or “correctional work for up to two years, or imprisonment for up to six months” if they don’t show up within 10 days. It’s “a bit cute and tragic at the same time,” Mazetti said. “They just expect us to show up just because they say so.”

But the KGB is also resorting to blackmail. They’ve arrested two young Belarussian men and accused them of conspiring with Studio Total (which the agency vehemently denies). One of the men, a journalism student, apparently had the temerity to post photos of the teddy bear drop on the internet. It seems the government is, in effect, using those dudes as hostages in an effort to force the Studio Total team to present themselves for “questioning”.

Here’s a video of the air drop taken from inside the Studio Total plane. The “bombs away” part of the flight starts a bit after the 3:00 mark.

Here are the sources I used for this first item:

By the way, if you want to see examples of other Studio Total operations — such as burning up stacks of cash and setting up a fake sex-school in Austria — visit their web site, linked above.

The next item is just a photo. Just a photo. It was taken about two months ago by a dude named Wally Pacholka. It shows the Milky Way over Monument Valley near the Arizona-Utah border. Fuckin’ amazing.

To see a higher-res version of this photo click here, and to see many more that are equally amazing, visit Pacholka’s page at a very cool site called The World At Night.

Okay, now that I have your attention, take a look at this and see if you can guess what it is: 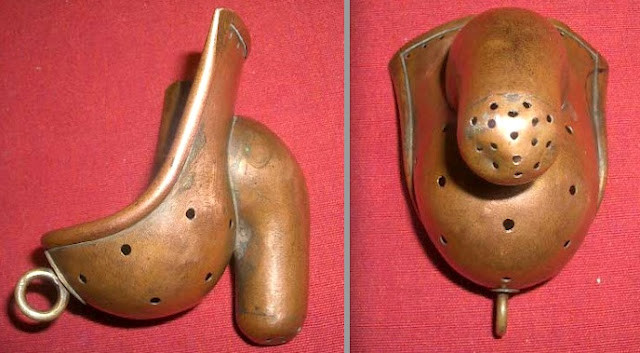 If you guessed an extremely rare 19th century device used in Catholic France to prevent boys from committing the sin of dolphin-flogging, applying the hand brake, buffing the banana, choking the chicken, clearing the snorkel, cranking the love pump, debugging the hard drive, jerking the gherkin, and otherwise shaking hands with the unemployed, give yourself a cigar.

I don’t play video games because that would eliminate what little life I have left, and so I only came across this next item today. Probably every gamer in the world (which I’m guessing includes about 95% of the people who read this blog) has already seen it, but what the fuck, I’m using it anyway.

It’s a trailer created by Scotland’s Axis Animation for the zombie video game Dead Island. It made AdWeek’s list of 2011’s Top 10 commercials. It starts with a young girl lying dead in the grass and then runs in reverse. You figure out pretty fast that the girl and her parents have been attacked by zombies while on vacation at a hotel. “The action continues in reverse to the moment of the attack, when the father still has time to save his little girl from the fate we’ve already witnessed.”

The piano melody transforms this thing into something other than CGI horror.

Well, since we’re on the subject of commercials, here’s another one I found this morning. It’s a three-minute spot for Lamborghini’s new super sports car, the Aventador, which boasts a 700 horsepower V-12 engine. Directed by Ole Peters, it was filmed at the Coyote Dry Lakebed in the California desert and then enhanced with special effects — and it is just fucking cool to watch from start to finish.

Also, I really would like to have this car. Really. Here is the web site for it. I’m accepting donations toward the suggested retail price of $379,700.

Lamborghini Aventador from Sehsucht™ on Vimeo.

Optical illusions are fun. They make your brain process things you see so that what registers in your consciousness isn’t reality at all.  Fucking with your brain is metal. So is this next image. They may not look like it, but these are two perfect circles: 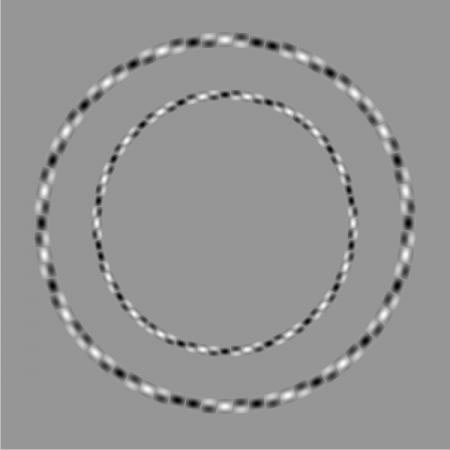 The illusion of irregularity is produced by the pattern of light and dark in the small squares that create the shapes. Here’s the proof: 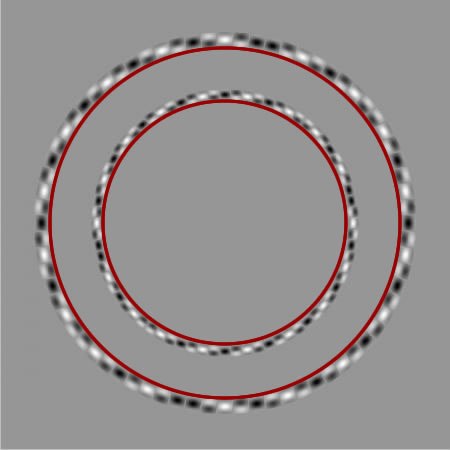 In this next photo, a newborn baby gorilla at Melbourne Zoo gets a checkup at the hospital and shows surprise at the coldness of the stethoscope, because . . . duh . . . it’s made of metal! (Pretty fuckin’ cute, too.) Of course, this photo is being turned into an interhole meme at a rapid rate . . . 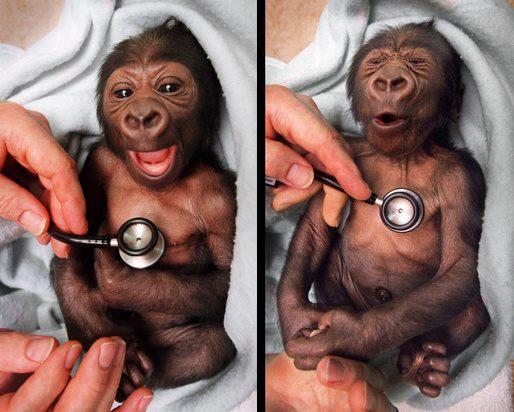 To wrap up this edition of THAT’S METAL!, here’s a screen shot of uWall.tv. 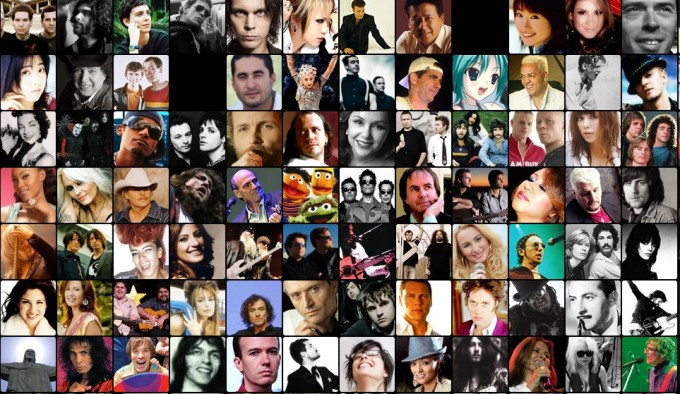 Uwall.tv was created by Argentinian web developer Sebastian Vaggi. On the uWall.tv site, you can scroll through an almost endless series of thumbnail pics for music artists (it may look like you’re getting to the bottom of the web page as you scroll, but trust me, you won’t get to the end for a long time). By clicking on a thumbnail, you’ll get a video playlist of YouTube vids that include the artist’s name.

Of course, 99% of the images I saw were for artists I have no interest in, and I’m damned sure not going to hunt for the rare appearance of a metal artist. Fortunately, there’s a search box on the page where you can type in a band’s name, and you’ll get a pop-up playlist for that band. I typed in “Cannibal Corpse” and got dozens of videos organized in a pop-up in a player.

I’m not saying I’m going to use this a lot, but the technology behind it is pretty amazing to my rudimentary mind. Go HERE to explore . . .

And that’s it.  As always, enjoy the rest of your fucking day.