I got an e-mail from Crypotopsy this morning. My pulse rate spiked, and so did my curiosity? Why, I wondered, was Cryptopsy writing me? And then I remembered.

I pre-ordered their forthcoming self-titled album — the album that I and every other Cryptopsy fan on the planet hopes will be a resurrection of the band who brought us None So Vile (1996) and other wonderful offerings over the following years — but who took a wrong turn with The Unspoken King (2008). And one of the perks that was to come with a pre-order was the chance to get a download of two tracks from the album in advance of its September 11 release date. And in that e-mail were codes for download of those two songs — which turn out to be the opening track, “Two-Pound Torch”, and the third one, “Red-Skinned Scapegoat”.

Well, of course, I dropped what I was doing and immediately downloaded the two tracks. I strapped on the patented NO CLEAN SINGING headphone-helmet with the built-in rawhide bit (to prevent biting through your tongue), the vacuum-seal goggles (to keep your eyeballs from popping out), and the forehead padding (to prevent skull fractures if you headbang your noggin’ straight into a wall or other inflexible surface). You see, I had my hopes up.

And I’m here to report that Crytopsy are FUCKING BACK! 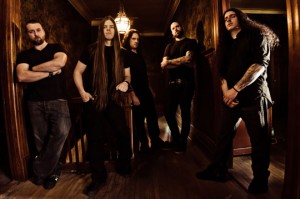 Let me count the ways:

First, the music is almost unrelentingly brutal. Listening to None So Vile is an experience that’s almost too intense, and the new songs capture a healthy dose of that intensity. Flo Mournier is an absolute madman behind the kit on these songs — which is to say, he delivers what you expect: an all-guns-blazing, gut-ripping attack. The jagged, jabbing riffage is also full-bore nearly all the time – furious, ripping, and remorseless.

Second, the music is fast as rockets and vividly technical. Fingers fly and so do the notes — they fly like a hail of scalpels from a storm-whipped sky. And did I mention that Flo Mournier is otherworldly behind he kit? Well, guitarists Jon Levasseur and Chris Donaldson and bassist Olivier Pinard are also pretty fuckin’ otherworldly, too.

Third, to answer the question on everyone’s mind, vocalist Matt McGachy is suitably beastly. There’s no clean singing, nothing but gruesome, gut-level roaring (and the occasional pig squeal). No, he doesn’t have Lord Worm’s range, but he strikes the right tone for the songs.

I also have to tell you that the new songs are not a complete clone of the early Cryptopsy sound.

There are more more squirmy, swarmy, swirly, lead guitar flights of exuberance and soloing than on None So Vile, and possibly even more schizophrenic jumps in rhythm. This has the effect of reducing the brutality quotient somewhat, but man it’s fun to hear.

And speaking of lessening the brutality, at the 4:35 mark on “Red-Skinned Scapegoat” there’s an abrupt change in direction with a pure-jazz instrumental. It lasts for all of 20 seconds, and then the head-whipping resumes. It’s just a wtf? surprise, though of course None So Vile had its share of surprises, too. I should also mention that the same song includes a segment of compulsive riffing before and after that jazzy break that’s guaranteed to trigger headbanging.

Gorod, Spawn of Possession, Nile, and Psycroptic have already turned out good-to-great tech-death albums this year, and the ones from Sophicide and Dysrhythmia that are due out later this month are sounding very strong, too. But if the rest of Cryptopsy’s new album is as good as these first two tastes, they are going to be right in the pack when people start making their year-end lists of 2012’s best tech-death releases.

You can still pre-order Cryptopsy’s new album at their Bandcamp page here.

And you can listen to both of the new tracks below:

14 Responses to “A FIRST TASTE OF CRYPTOPSY’S NEW ALBUM”