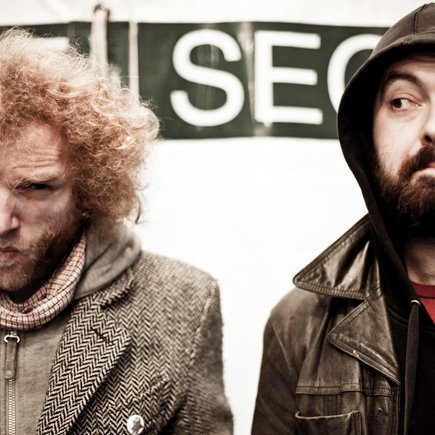 It’s a fact: No one has ever accused the humor at this site of being too sophisticated. We pride ourselves on being moronic, juvenile, and foul as often as possible, or at least I do. For example, I don’t think you can ever have too much dick humor. I know you feel that way, too, which is why this post is just gonna light you up!

Yesterday I was introduced to a French band called Chateau Brutal by the always entertaining Church of the Riff — and if you’re not reading that blog on a regular basis, you’re missing out on some primo entertainment. For example, here’s what the Church had to say about Chateau Brutal’s new second album, Ham Slicer:

This French garage rock duo’s second album is 10 tracks of rump rattling, ear splitting, foot tapping rawk and fucking roll. It’s the drunk guy at the bar who’s lost his pants and is screaming at the half-empty pint on the table to fill itself up again. Noisy, fast and frenetic, it’ll grab you by the nose and shake you until the screaming stops.

Take one porterhouse thick guitar tone, mix in a hammering percussion section and season with everything from turntables to saxophones. Then soak it in beer, rip it’s pants off and stay the fuck out of the way. It goes hard, but not on the sonic destruction front, on the “drink all your beer, then steal some more, then get laid, then find more beer, then steal a zebra from the zoo and get the police to chase you”…front.

You just know an album is going to be good when it’s opening track is “My Dick”, and it’s followed immediately by “Meet My Meat”. 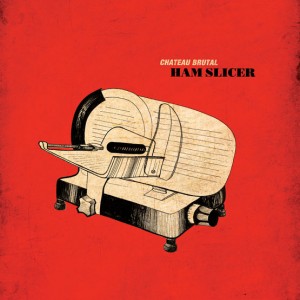 And sure enough, the Church is right. Ham Slicer is indeed “a well crafted slab of garage rock, dripping sleaze and sauced with shenanigans.” Lyrically, it is indeed “crude, sexual and immature”, but that just makes it all the more fun for connoisseurs of sophisticated humor like yours truly.

No, it’s not metal, but all the crude sexual humor makes up for that, am I right? Yeah, of course I am.

And then there’s this video, which gave me prolapse laughter. I know you’re going to like it as much as I did.

“Meet My Meat” is a free download on Bandcamp, and the rest of the music can be bought at iTunes.

We’ll classy the place up a bit with our next post, which is an actually serious review of an actual serious album. And if the thought of that makes you yawn, you can go back to Church of the Riff and read the new review of Oh Shit! by a band called . . . (wait for it) . . . Dick Move. Here’s the rest of Ham Slicer: