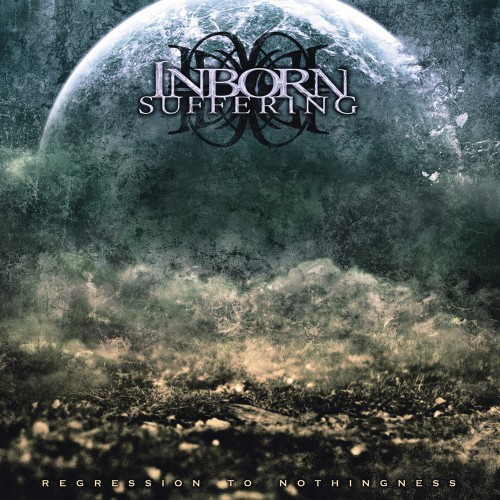 And we’re here with the final of the three doom records (or records with doom elements, in the case of Barren Earth) that I’ve been listening to during this wonderful summer in Sacramento. I came across Inborn Suffering on a whim whilst bouncing around Bandcamp’s metal section. I looked them up and found out that this was only the French Melodic Doom Metal group’s second album and it had just been released after a six year wait. If you caught my Zonaria review, then you saw me musing on the fact that four years of waiting really sucked, so I can’t imagine what it was like to really be looking forward to these guys’ second release after six.

It seemed like their first disc was pretty well received and this one had been gathering positive press as well, so I checked it out. This is doom by way of groups like Daylight Dies, where everything sounds like it was recorded in an empty room with completely grey skies. It is heavily accented by some serious keyboard work and drags itself along at a slow, crawling pace. It swells at just the right moments to give the sense of drama that attracted me to this specific offshoot of doom in the first place. It’s also distressingly heavy when it needs to be.

Let me say this, I kind of wish I was one of the people who had to wait six years for this disc, because it is really good. To someone like myself, it is a pleasant surprise, and I can only imagine the sense of relief when a fan of the band finally gets their hands on this album and is gratefully  dragged along on the slow, plodding journey into utter misery on Regression To Nothingness. 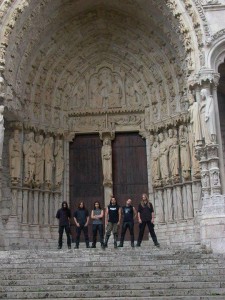 You’ll know from the opening seconds of Regression To Nothingness what you signed up for, if you hadn’t figured it out already. The disc begins with a humongous, discordant crash before dropping into a slow, hypnotic shamble. Appearances can be deceiving; at seven tracks, it looks like a very short album, but each song stretches to almost twelve minutes in length (“Another World” being the only oddball, coming in at a gaunt six minutes), providing a huge slab of misery on which to bite down.

I’ll admit that I’m not the best when it comes to the genre, as I usually find myself listening to songs and going, “alright, get to the point here…”. but I figure if a band can hold my attention as long as they continue playing, then surely they should be someone to look into. Inborn Suffering manage this through a combination of things, and never once did I find myself wanting to skip a song. I only wanted to breathe each one in and see where it would go. The only time I ever glanced at my music player was to check song titles when I sensed one had changed to another. One that really caught my attention was “Apotheosis”, which has now cranked my number of songs named “Apotheosis” up to a grand total of two. It starts out much like opener “Slumber Asylum”, but contains a heavy groan of the song’s title.

Vocals on this album are of the low, death-growled variety, with very little that could pass for singing. There’s some talking and light narration in a pretty thick accent, but even that goes at a snail’s pace, never to clash with the atmosphere that band have built. Occasionally, songs do speed up, but only to add a double bass-drum section that makes things particularly heavy, not to really be upbeat.

Inborn Suffering don’t exactly come off as positive people with what they’re trying to accomplish here. Songs tend to have movements with a theme running throughout, as opposed to one long stretch of exactly the same thing. “Born Guilty” probably has the heaviest opening, with an actual head-bobber of a drum rhythm, before falling into the echo-filled abyss that this band have made their home. Not shocking, given that they have a nearly ten-minute song on this disc entitled “Self Contempt Kings”. They may be attempting to give Katatonia a run for their money in the kings of despair category with that one.

Because the band have a dedicated keyboard player, a very strong sense of melody is pervasive throughout each labored drum hit and cascade of guitars on Regression To Nothingness. He provides a surprising amount of backbone to this band’s take on the genre and sometimes makes them sound a bit like a combination of Daylight Dies and Swallow The Sun’s earlier stuff.

Vocalist Laurent Chaulet (who also provides guitar work) has three different voices on this album. He has a low death metal growl that should be pretty comfortable to those familiar with this specific style of music. There’s a bit of echo added to each phrase so that words tend to drag on just a little bit longer than usual, giving credence to the whole empty-room aesthetic that the band are using. He also uses a high, dramatic-sounding yelp, probably the harshest one for him to pull off. It sounds like utter agony, and he bounces between the two regularly between each movement in a song. Then he does some monotone talking that meets the bar of the genre standard. It’s not my personal favorite when it pops up, but it’s usually used sparsely. Most of the time, there is only one guitar behind it,  so you’ll know when those sections are coming.

Despite how empty the band attempts to sound, I do love how the bass guitar just seems to hum on this disc. If there weren’t so much going on on top of it, you could probably use the hum from this album to rock yourself to sleep. Hell, at the very least, it does serve to help put you into that hypnotic trance state that you usually need to get through a dense album such as this one.

Despite this being only the band’s second big release, Inborn Suffering clearly have their formula down to a T. They’ve found what works and made a seventy-plus minute testament to that. Regression To Nothingness is the type of album that crashes around you and fully envelops you in an aura of misery. It’s almost like a tragic stage play done in seven parts, each song drawing closer and closer to an utter void. The mood is grim from square one on Regression To Nothingness, and following a band like Inborn Suffering further and further down the path that they walk is to adopt a philosophy of utter desolation. Everything crawls and labors to grab your attention. Guitars are often loud and discordant, with just enough melody to stand alongside the melancholic keyboard playing. Drums rarely move past a single snare hit every few measures, and when they do, they’re heavy enough to provide almost a groove akin to death metal’s slower moments. Even in the vocals, Inborn Suffering have shot way past the point of being depressed to just screaming on an almost primal level.

Regression To Nothingness is an excellent demonstration of the sense of futility that a death/doom release can bring. It’s seventy minutes of being crushed and overwhelmed, and when it ends, it leaves you empty and searching for more.

EDITOR’S NOTE: Inborn Suffering have made Regression To Nothingness available on Bandcamp for $4.99. In addition, the band’s first album from 2006 has also been recently uploaded to Bandcamp and can be downloaded for $3.99 at this location. Inborn Suffering’s Facebook page can be reached via this link. And here’s the music: