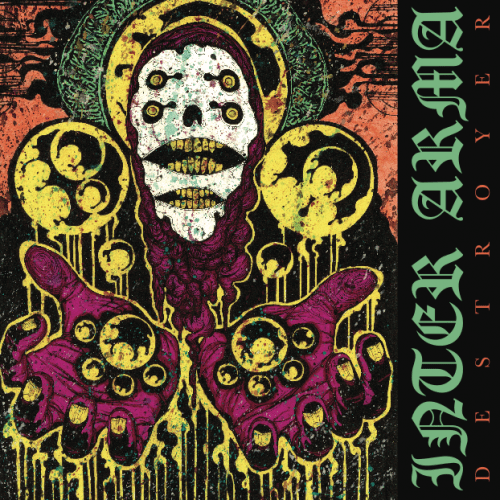 Yesterday, I saw this press release in my in-box: “Relapse Records is extremely proud to announce the signing of Richmond, VA’s INTER ARMA. The group . . . formed in 2006 and released their debut full-length Sundown via Forcefield Records in 2010.  Combining a punk rock ethos with an esoteric blend of psychedelia, black metal, and doom/sludge, the quintet quickly developed a name for themselves in the underground through relentless touring and mesmerizing live performances.”

I tend to take things like “relentless touring and mesmerizing live performances” with a grain of salt, but I perked up at that description of the band’s sound. I perked up even more when I saw that the band’s 12″ EP (Destroyer), which was released in June by Toxic Assets, was available for streaming on Bandcamp. And then the last bit of perking came when I saw the EP’s very cool cover art (above).

Fully perked, I listened to the EP — and realized why Relapse had glommed onto this band with sticky fingers. In a word, Destroyer is amazing. It’s an unpredictable collection of four very different songs that give the middle finger to genre classification. Inter Arma are like a conflation (or conflagration) of Melvins, Pelican, Neurosis, Satyricon, and Southern blues metal. Like the marriage of Electric Wizard and Darkthrone and . . . oh fuck it, none of these band references are really working very well as a means of capturing the music, so let’s try this . . . 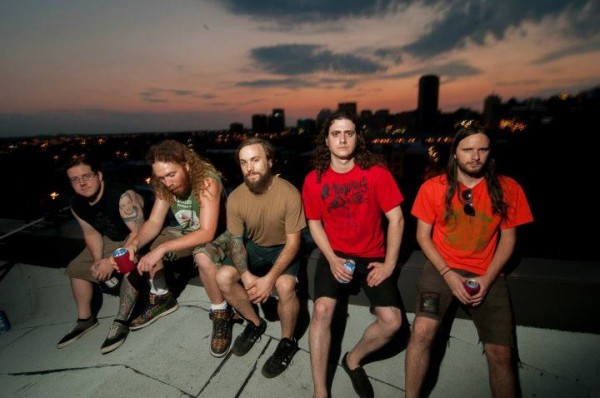 The first song, “Wailing Moon”, is one of those jams that’s nearly 10 minutes long and still too short. It’s a heavy, compulsive, virally infectious mix of sludge, stoner/doom, and blasting black metal. Killer riffs, head-thumping rhythms, scalding vocals, a riveting instrumental break, and a melody that won’t let go — the song has all of that, plus some. One of my new favorite songs. I’d say it’s the best on the EP, except that would a bit like comparing apples to oranges.

The second song, “Darker Movements”, is a much shorter track and a sharp stylistic break from “Wailing Moon”. Feedback layered with acoustic picking and what sounds like a distorted bottleneck guitar screaming along with the feedback throw off a vibe of backwoods psychedelia.

The music veers off again in yet another direction with “The Long Road Home”. It begins slow and bluesy, with reverberating guitar chords, soulful bass notes, brushed cymbals, and booming drums. The music builds to a crescendo with a mesmerizing solo and beautiful guitar/bass interplay — and then the song erupts in blast-beats and ripping tremolo leads, but with that nimble bounding bass still very much in evidence. It’s almost two songs in one, and both of them extremely cool.

This roller-coaster of an EP changes directions again with the title track. “Destroyer” is a sludgy, psychedelic proclamation of thick, distorted, doom-drenched guitar chords and bone-breaking tribal percussion. It’s loaded with radioactive fuzz and a mix of gritty yells and acidic shrieking. It’s raw, crushing, and droning . . . and really left me wishing I knew what the band would have done next if they’d recorded a fifth track for this EP.

Inter Arma are plainly loaded with talent and unafraid to put their divergent influences in a blender. The concoctions they’ve produced so far are original and very, very tasty.

The band’s Relapse debut is already recorded, mixed, and mastered, and I fuckin’ can’t wait to hear it. Inter Arma’s Facebook page is here. And this is the music: