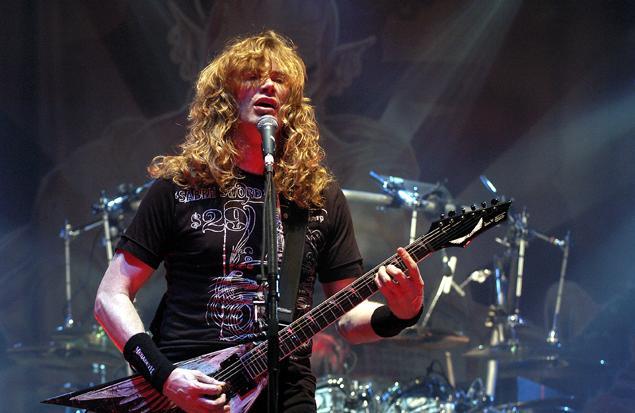 It’s so rare that anything connected with heavy metal breaks into the mainstream consciousness that I can’t help but pay attention when it happens. Today it was kind of unavoidable. I was in my car with the radio tuned to a local talk channel just about the time that the CBS national radio news came on, and sure enough, right there at the end, after stories about things like wildfires and drought in the Midwest and Mitt Romney’s latest insistence that, yes, he pays his taxes, was Dave Mustaine’s latest and perhaps most outrageous pronouncement yet. CBS even aired a clip from Mustaine’s August 7 commentary in Singapore. You know, the one where he said this:

“Back in my country, my president … he’s trying to pass a gun ban, so he’s staging all of these murders, like the ‘Fast And Furious’ thing down at the border … Aurora, Colorado, all the people that were killed there … and now the beautiful people at the Sikh temple.”

Later, Mustaine went on to suggest that he may move to Singapore — a state not exactly known for its libertarian values — to escape the terror of “Nazi America.”

It’s true that Dave Mustaine is not the only member of the community of metal with paranoid goofball ideas who insists on sharing them with the world. Unfortunately, the patronage of generations of metalheads have given him a platform from which his blathering gets noticed a lot more than the blathering of other lunatics who play in metal bands. It’s way past time that fans took the platform away from him.

I’m not really trying to organize a boycott — because I can’t. Not enough people pay attention to what’s on my mind. And given what I guess about the readership of this site, I’m probably preaching to the choir anyway. So, this is really just a cross between a rant and a fantasy.

But I do indeed fantasize about people in metal turning their backs en masse on this guy and not dropping another fucking dime in his coffers. It’s really not too much to ask, because there are so many other metal bands at least as good as Megadeth (I’m being way too generous, of course, since Megadeth hasn’t put out a relevant album in eons). So it’s not like this idea calls for any serious personal sacrifice.

And before anyone starts yelling “free speech”, let me be clear: Dave Mustaine is free to be an asshole, and we’re all free to spend our money in other ways. The First Amendment of the U.S. Constitution is a limitation on the power of government to restrict freedom of speech. It has no bearing on the ability of us as consumers to spend our money, voluntarily, as we choose. I’m saying we should choose not to spend it on Megadeth.

I’m not suggesting that you steal Megadeth’s music instead, because I’ve come around to the belief that ripping off artists’ works is not cool — even when the artist is an ignorant blowhard.

I don’t care what your politics may be, or whether you support or oppose Obama or gun control, this latest piece of Mustaine spew is over-the-top ridiculous. Not only is there zero evidence to support Mustaine’s conspiracy accusations, there’s not even any evidence that the Obama administration is doing or planning to do anything concrete to restrict the ability of Americans to buy or own guns. The irony is that it’s not Obama who’s using the horrific shootings at Aurora and Milwaukee to promote his political agenda, it’s Dave Fucking Mustaine, and that’s just disgusting.

I could go on about Mustaine wanting to preserve the unfettered right of every wacko in the U.S. to get their hands on military-grade assault weaponry, which will enable them to kill a lot more people before being stopped than they could with knives, bricks, bats, or even handguns — but I’m trying not to make this about the pro’s and con’s of gun control. It’s about the pro’s and con’s of Dave Mustaine’s mental state and continuing to help finance his privileged existence with our fucking money.

I feel slightly bad about the thought of depriving the other members of Megadeth of their income. But they’re good musicians, and I think they’d land in even better bands if Megadeth were to fold from lack of fan support, or at least bands without an embarrassing douchebag as it’s won’t-shut-up spokesperson.

Okay, I’ll stop now. Though I could go on and on and on. But I won’t. Feel free to disagree with me in the Comments. Just don’t expect me to buy anything you’re selling.

55 Responses to “SERIOUSLY, DON’T GIVE MEGADETH ANY MORE OF YOUR MONEY”