Rattenfänger is a new band from Ukraine, but the band’s four members have already established their kvlt cred: They are also the four members of Drudkh and Old Silver Key (along with Neige from Alcest), and three of them are also members of Blood of Kingu. If those band names don’t mean anything to you, then you got some ‘splainin’ to do.

If you are familiar with those other bands, however, I think you’re going to be surprised by what Rattenfänger sounds like. This isn’t black metal or pagan/folk metal or depressive indie rock. This is voracious death metal, of the death/doom variety, and the one song I’ve heard so far is outstanding.  An album’s worth of material, entitled Epistolae Obscurorum Virorum, will be released by the Norwegian label Dark Essence Records in late October/early November of this year.

The band take their name from the legend of the Pied Piper of Hamelin (in German, Rattenfänger von Hameln). You remember that tale, don’t you? The townspeople hire the rat-catcher to rid their town of rats, but then stiff him on the bill after he succeeds, and he then uses his magical pipe to lure the town’s children away, never to be seen again. According to a press release, “the lyrics for Epistolae Obscurorum Virorum are in Latin and are written in style of the medieval poets, the thinkers and the troubadours/minstrels of old.”

Being the curious sort, I did a bit of poking around and discovered via The Font of All Human Knowledge that Epistolae Obscurorum Virorum was “a celebrated collection of satirical Latin letters which appeared in 1515-1519 in Hagenau, Germany . . . mock[ing] the doctrines and modes of living of the scholastics and monks, mainly by pretending to be letters from fanatic Christian theologians discussing whether all Jewish books should be burned as un-Christian or not.” Pope Leo X was not amused and excommunicated the authors, readers, and disseminators of the Epistolae Obscurorum Virorum  in 1517. 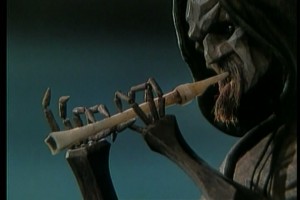 None of this thematic focus is exactly typical of your average death metal band, but then again this isn’t your average death metal. I say that based on a song from the album by the name of “Grimorium Verum”. Again, the song title has an historical antecedent. By doing a bit of googling I learned that The Grimoire of Truth was a textbook of magic written in the 18th Century but passed off by its author as something written in 1517 by “Alibeck the Egyptian”.

The song is horrifyingly dark and virally infectious, with a catchy, occult guitar melody appearing here and there amidst a phalanx of massive, stomping riffs and bone-snapping percussion. Needling tremolo leads also make an appearance, as if boring through craniums to get at the soft tissues inside. Apart from the grim melodies, what really gives the song that horrifying aura are the vast, cavernous, bestial vocals of the über-talented Roman Saenko. Have a listen: