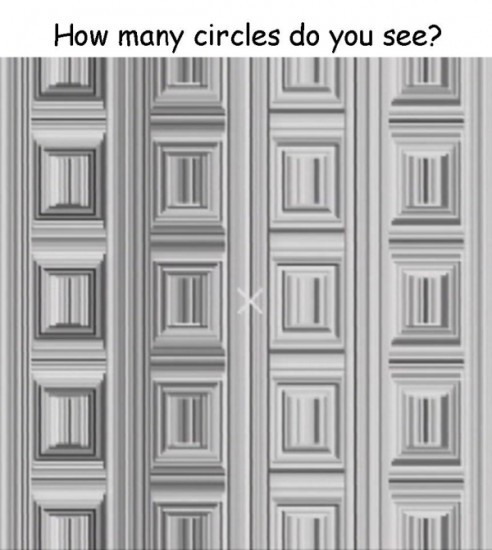 Greetings to one and all and welcome to the 61st installment of THAT’S METAL!, in which we pause from our headbanging long enough to hunt through the slimy bowels of the interhole for images, videos, and news items that we think are metal, even if they’re not music (or at least not metal music). Today we have 7 items for you.

As usual, our first item is staring you in the face at the top of this post. But to understand why it’s metal, you have to stare back at it. You may have to stare at it a long time. I did (though I tend to stare blankly at all sorts of things for a long time, usually with a sagging jaw and a slow stream of drool leaking out my gob).

At first glance (and at second, third, and fourth glances) you will see coffers, which is a term for sunken decorative door panels. But there are in fact 16 circles in that image, set against the background. I’m not sure why our brains’ first impulse is to tell us we are seeing rectangles, instead of to see the circles first and then the rectangles. But as illusions go, this one is pretty fuckin’ cool.

It was created by Anthony Norcia, and was a finalist in the 2006 Best Illusion of the Year contest I’ll give you a hint at the end of this post that may make it easier to see the circles if you get stumped.  (via TYWKIWDBI)

Do you recognize this? 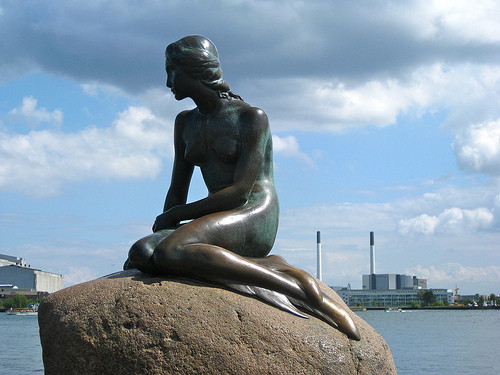 Why yes, it’s the Little Mermaid! It’s a statue based on the Hans Christian Andersen fairy tale of the same name located at the Langelinie pier and park in Copenhagen, Denmark. It was commissioned by the son of the founder of Carlsberg brewing company (beer!) and created by a sculptor named Edvard Eriksen in the early 1900s. It was installed in the harbor in 1915. You can see it from a different angle here: 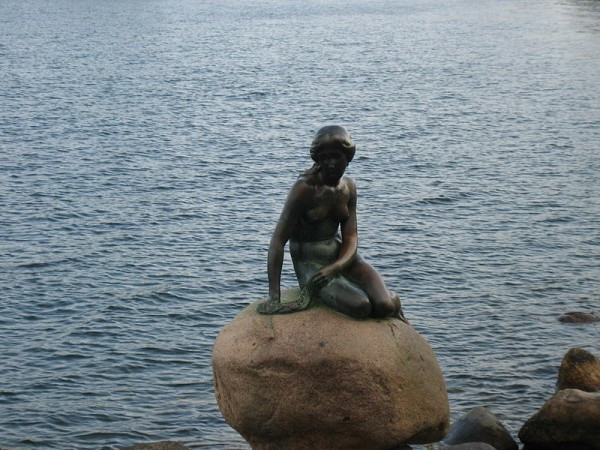 I didn’t really intend to make the statue a separate item in this post. I was just going to refer to it in the next post, but then I started reading about it, and decided it deserved a few paragraphs of its own.

The sculptor modeled the head after Ellen Price, the prima ballerina of Copenhagen’s Royal Theater, but because she didn’t want to model in the nude, Eriksen used his wife as a model for the body. However, the head that has been on the statue since the mid-1960s isn’t the original — because on April 24, 1964, the statue’s head was sawn off and stolen by politically oriented artists of the Situationist movement.

How was a copy of the head created if the original disappeared? Well, it turns out that the statute in the harbor has always been a copy. The sculptor’s heirs keep the original at an undisclosed location. Other bizarre facts about the statue and what has happened to it over time can be found at The Font of All Human Knowledge).

Okay, with that background, we now come to this much newer statue in Copenhagen: 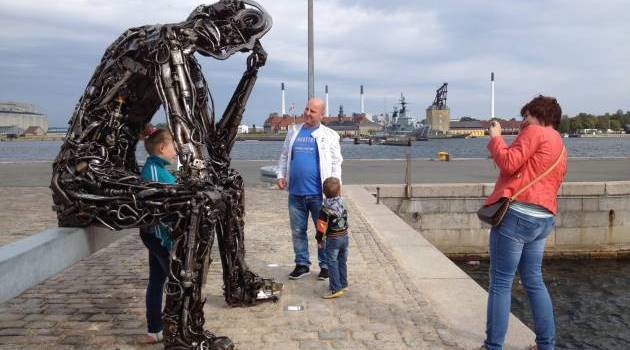 This is a sculpture loosely modeled after Rodin’s The Thinker made of machine parts (including a catalytic converter from a Ferrari and parts from Thai motocycles) by an artist named Kim Michael. It’s official name is “The Global Visionary”, but everyone is already calling it The Terminator. It’s located a few hundred meters down the waterfront from The Little Mermaid — which seems to have pissed off a lot of people, including art critics who have been savaging it (calling it, among other things, a piece of “spiritual pollution”). Here’s another shot: 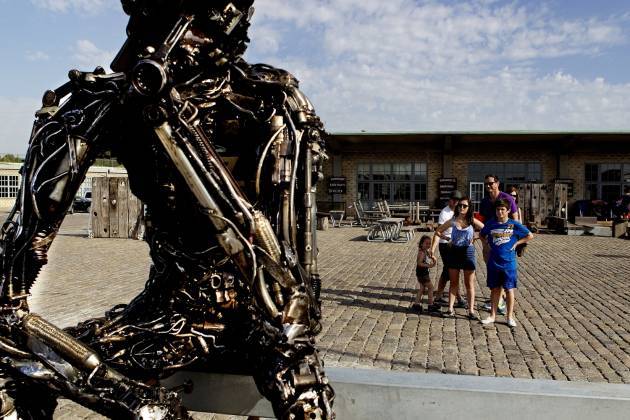 It was privately funded and installed earlier this month. I think it’s metal (of course it is). So does MaxR of Metal Bandcamp, who kindly sent me links to Danish newspaper stories about the piece. What do you think? 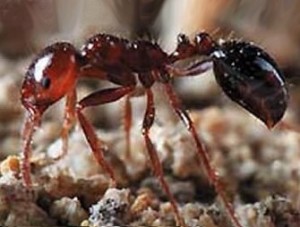 When I was a strapping young lad in high school, back during the last Ice Age, I had a summer job for the Texas Department of Agriculture loading heavy sacks of fire ant poison from trucks onto railroad freight cars bound for farms and ranches in the Texas hinterlands. As an indication of just how long ago this was, the poisonous dust was everywhere in those freight cars and none of us grunts had face masks.

It was hotter than hell, and I’m sure I inhaled a couple pounds of that shit over the course of the summer, in addition to wearing it home at the end of every sweat-soaked day. There are thousands of ways to die, but I’ve always figured that fucking fire ant poison is eventually what will put the stake in my heart.

Memories of that lovely summer came back to me when I saw this next video. The makers of this thing really didn’t need to dramatize and cheese it up. The facts alone are fascinating. Even though I’ve been bit by fire ants (burns like hell) and killed or helped kill jillions of them, I gotta give these nasty fuckers some respect.

For the most part, air travel sucks. It sucks harder if you have to do a lot of it. It’s cool to think of ways in which one day it might become amazing. Some people at the European aircraft manufacturer Airbus have been doing that. They’ve been imagining (and actually engineering) a futuristic “concept plane”. It seems like pure sci-fi today, but who knows?

Check out this artist’s rendering of “the vitilizing zone” of the concept plane — a compartment in which the aircraft’s body can be made transparent at the wave of a hand, with organically grown seating and devices to collect body heat to power the cabin facilities: 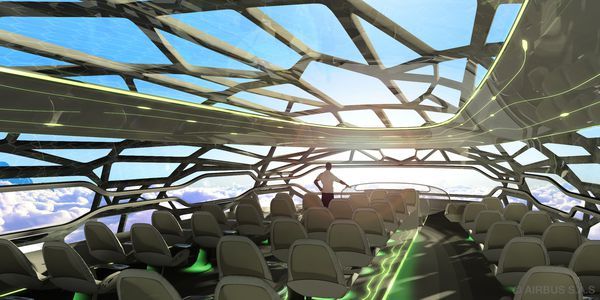 If this gets your imagination humming, then watch this video:

More info is available at the Airbus web site. (Thanks to a post on TYWKIWDBI, which sent me in search of more info about this subject.)

This next item also seems like sci-fi, but it’s about something astonishing that’s happening right now. 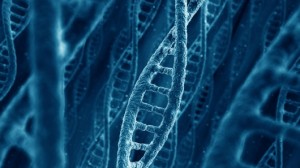 George Church is the Robert Winthrop Professor of Genetics at Harvard Medical School and a founding core faculty member of the Wyss Institute for Biomedical Engineering at Harvard University. Church has written a new book which is scheduled for publication in October. He and his team, which included Sri Kosuri, a senior scientist at the Wyss Institute, converted everything in the book to binary data and then encoded 70 billion copies of it in synthetic DNA.

I really don’t understand this, but that doesn’t prevent my mind from being boggled by quotes like these:

“Biology’s databank, DNA has long tantalized researchers with its potential as a storage medium: fantastically dense, stable, energy efficient and proven to work over a timespan of some 3.5 billion years. . . . [T]he density of the bits is nearly off the charts: 5.5 petabits, or 1 million gigabits, per cubic millimeter. . . . About four grams of DNA theoretically could store the digital data humankind creates in one year. . . . Where some experimental media—like quantum holography—require incredibly cold temperatures and tremendous energy, DNA is stable at room temperature. ‘You can drop it wherever you want, in the desert or your backyard, and it will be there 400,000 years later,’ Church said.”

For more info about this achievement, go here or watch the following video. Science wins again.

This is Jayen Varma. He lives in Cochin, Kerala, India. He claims to hold the record for fastest bass guitar player. The rules for the record: (1) must be played on a musical scale continuously for one minute; (2) must be played at four notes per beat at highest possible BPM; (3) must be played in the traditional right hand finger picking technique. Jayen did this shit at 324 bpm. Fuckin’ metal.

Okay, that’s it for this installment of THAT’s METAL!

Ooops, nearly forgot. If you couldn’t see the circles in ITEM ONE, they appear in four columns of four, and each circle overlaps the rectangles in each column (with the center of each circle sort of in between each pair of rectangles). I found it easier to see them when I wasn’t staring straight at the image but instead seeing it with peripheral vision.

Oh, fuck it. Here’s one more illusion (courtesy of TYWKIWDBI). These may looks like spirals, but they’re not. They’re circles. Put your cursor at a point on the “spiral” and trace it. You’ll see. 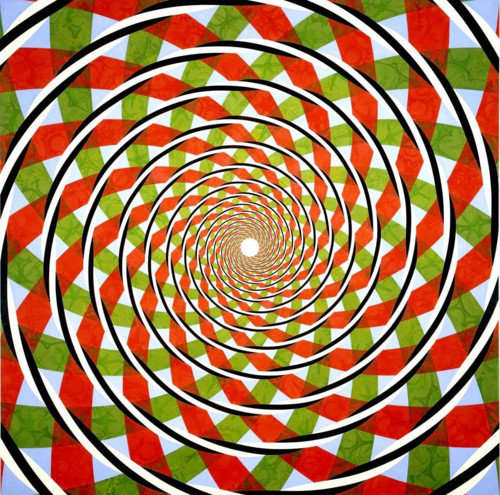